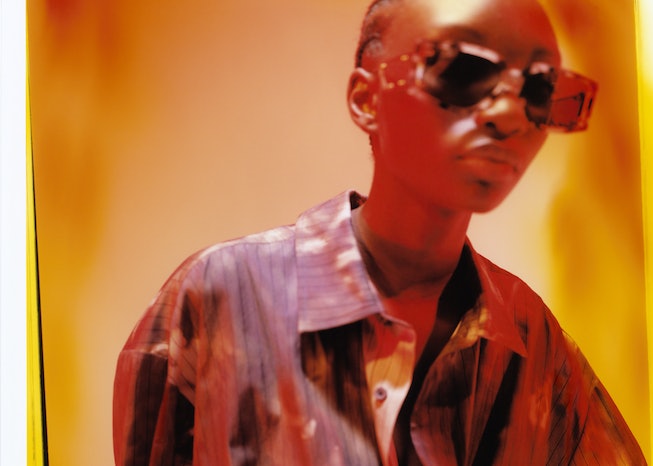 2020 has been mostly bad, and I'm not saying it's directly coordinated to the absence of Rihanna’s general presence (and the anticipated-yet-unknown release of R9), but I am saying it's an interesting coincidence. Yes, she has made herself available when we truly need her, publicly supporting Black Lives Matter and donating money to coronavirus relief, but as an only child and an American woman, I am particularly selfish and greedy, and frankly, I want more Rihanna in the world right now.

While this isn't an official announcement of new music, perhaps this is the next best thing: new Fenty drops for our summer wardrobes. June 11 marks the first of three releases from Rihanna's luxury line, and it couldn't have come at a better time. The first drop brings back the "Immigrant" shirt from last year, this time in a semi-transparent jersey fabric, as well as a new take on the brand's signature corset dress. The releases will also include plenty of tie-dye for those who are sick of making a mess in their kitchen sinks.

The three drops are meant to celebrate the youth, saying in the press release, "In a time where fighting for global freedoms takes center stage, this release speaks to a generation that is a different kind of creative, and a different kind of rebellious."

The first drop is currently on sale, but mark your calendars for June 18 and July 15 for the next two this summer. To see more of what to expect from Fenty's upcoming releases, take a look at some of the campaign images, below, shot by Lea Colombo.

NEXT UP
Fashion
A Bode Women's Line Is Coming
Fashion
The Best Celebrity Fit Pics From Paris Men’s Fashion Week
Fashion
The Wildest Front-Row Looks From Couture Week In Paris
Fashion
Rosettes Are 2023’s Biggest Trend — Here’s How Celebs Wore Them in the 2000s
Style + Culture, delivered straight to your inbox.