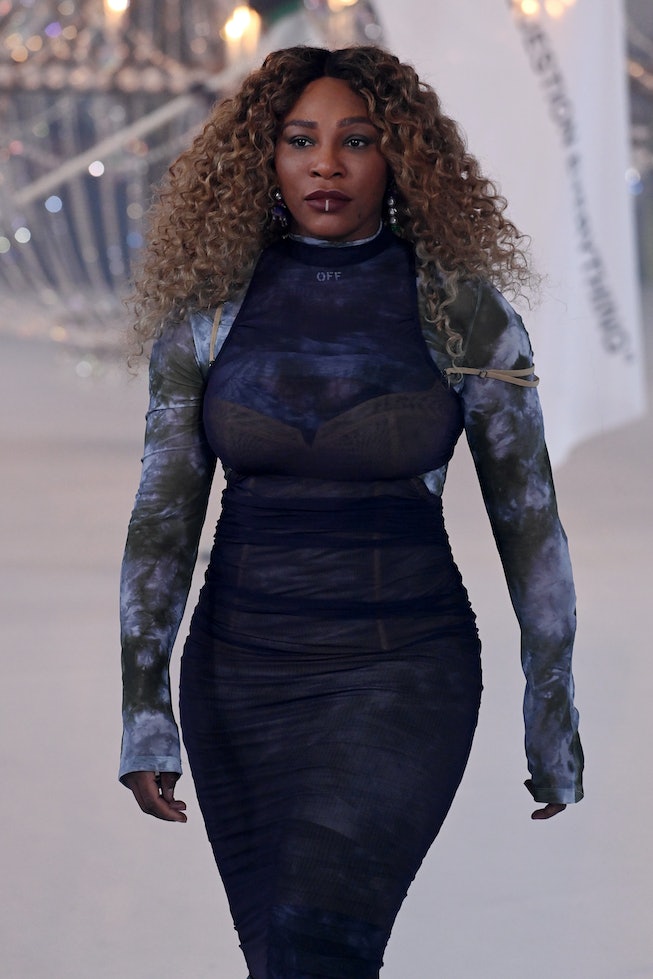 Celebrity runway cameos may be a running theme this fashion month, but the latest surprise appearance is an extra special one.

On the first day of Paris Fashion Week, Off-White presented its Fall 2022 collection, the final contribution from the late designer and founder Virgil Abloh, who passed away after a private battle with cancer in November 2021. The Milan-based luxury brand’s runway show was divided into two parts, including a ready-to-wear collection for the upcoming season and an offering of “couture-like ‘high fashion,’” according to BoF. Tennis champion (and longtime muse to Abloh) Serena Williams walked for the former portion, wearing a printed, high-neck long-sleeve top and pants underneath a sheer knee-length dress.

Williams is no stranger to the runway, having graced the catwalk for her own fashion line’s shows in the past. But this marks her first time walking for a major luxury brand during fashion month, as well as a tribute to her longtime fashion collaborator.

Abloh and Williams first teamed up for Nike, as she served as the inspiration behind the designer’s first collection for the global sportswear brand. “With Serena, we have one of our generations most powerful, inspiring athletes as the muse,” said Abloh in an official statement on the launch. “I was trying to embody her spirit and bring something compelling and fresh to tennis.” The aptly titled “Queen” collection included Abloh’s version of the classic tennis dress, featuring asymmetrical color blocking, classic Off-White text (the chest reads “LOGO,” while the sleeve reads “SERENA”), and a tulle tutu skirt. Williams later went on to wear the dress in various colorways to the 2018 U.S. Open.

The following year, Williams attended the 2019 Met Gala wearing neon yellow sneakers designed by Abloh as a part of his sneaker collaboration with Nike, and shortly after, she wore an outfit also from Abloh to the 2019 French Open. The black-and-white striped two-piece set, which also included a matching cape, was emblazoned with the French words for “mother,” “champion,” “queen,” and “goddess.”

After Williams walked the Off-White Fall 2022 show, she took to Instagram to post a tribute to Abloh and share her runway experience. “I had an unbelievable time walking in the @off____white show,” wrote Williams. “Virgil meant so much to me, and to walk in a collection that he was still a part of was something I could not miss. Thank you for the opportunity. I am so grateful to show love to my friend.”

NEXT UP
Fashion
The Wildest Front-Row Looks From Couture Week In Paris
Fashion
Apple Martin Is A Chanel Girl Now
Fashion
The Best Celebrity Fit Pics From Paris Men’s Fashion Week
Fashion
Rosettes Are 2023’s Biggest Trend — Here’s How Celebs Wore Them in the 2000s
Style + Culture, delivered straight to your inbox.