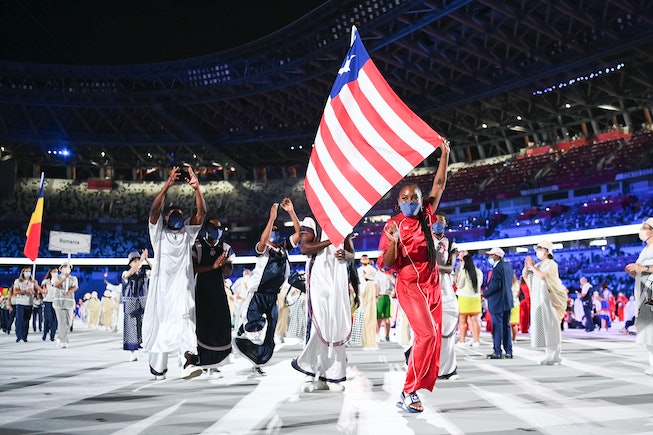 Shortly after its latest collaboration drop with UGG, Telfar now has its sights set on the Olympics. According to The New York Times, the award-winning brand behind the cult favorite Shopping Bag will be designing Liberia’s 2021 Olympic uniforms. This is Liberian-American designer Telfar Clemens’ first foray into performance gear and will soon become a core collection for the fashion label in the fall.

“He and Babak Radboy, his artistic director and business partner, had been contemplating a line of athletic clothing for a while, and the Olympic project was the perfect opportunity to start,” wrote fashion director and chief fashion critic Vanessa Friedman of the NYT.

Telfar will be dressing the West African Olympic team, comprised of five track and field athletes, including Emmanuel Matadi, who is currently ranked 23rd in the world in the 200 meter dash and 25th in the 100 meter dash. In fact, it was Matadi’s girlfriend (a follower of Telfar on Instagram) who got the Olympian on brand’s radar after she mentioned its coveted bags.

Not only will Telfar be creating Liberia’s uniforms for competitions, the opening and closing ceremonies, time spent in the Olympic Village, as well as the country’s officials and support staff — totaling about 70 pieces of sports apparel and accessories — but merch, too. The limited-edition collection featuring pieces inspired by the Olympics will drop online similarly to its Shopping Bags, which means that this exciting launch will likely sell out fast, too.

NEXT UP
Culture
Mowalola Teams Up With Bratz For A Daring, High Fashion Collection
Culture
An Exhaustive Breakdown Of The Balenciaga Controversy
Fashion
Reformation & Canada Goose Team Up To Warm You Up
Fashion
Coach Reissues Y2K Favorite Demi Bag

This article was originally published on June 21, 2021