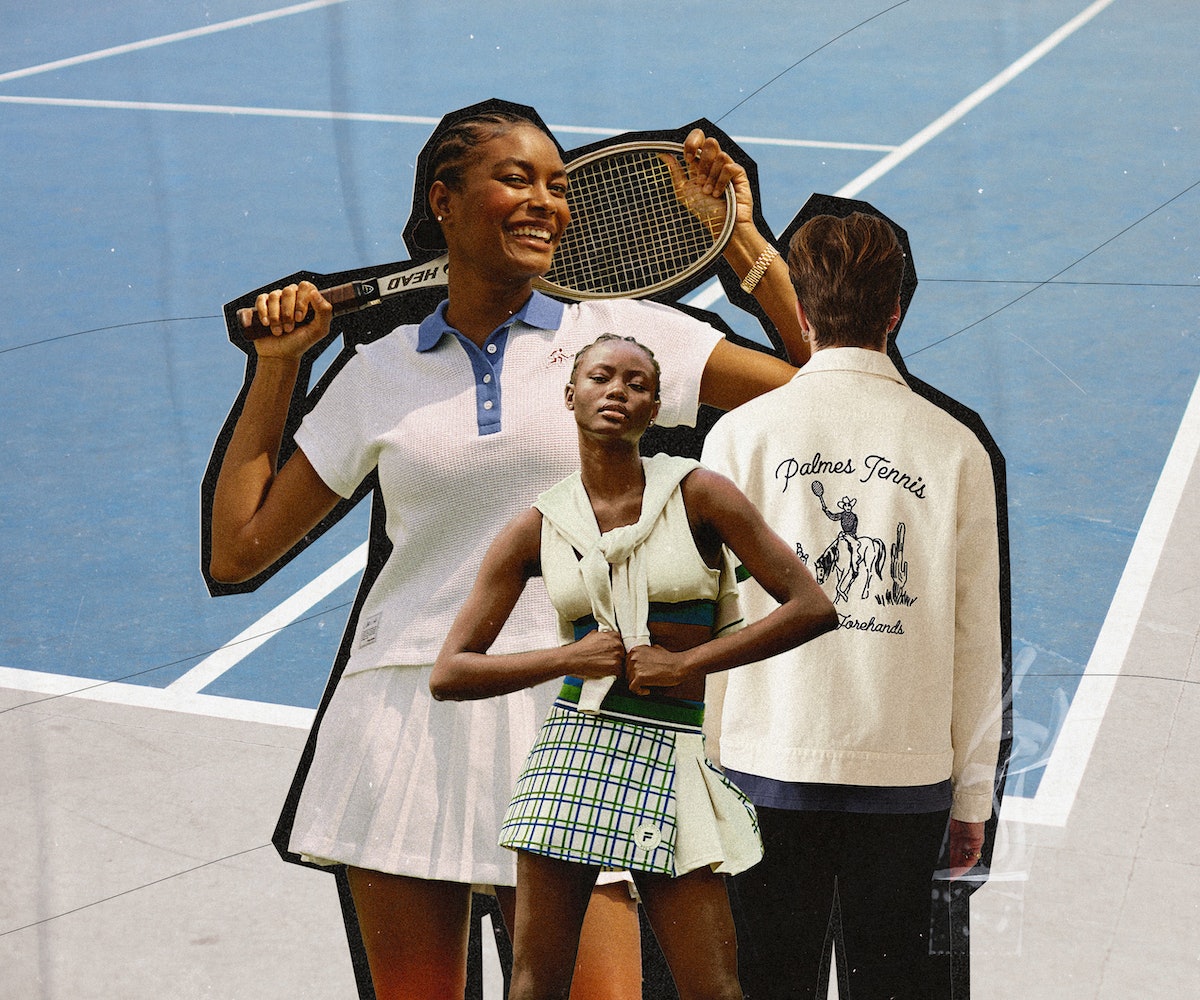 If you are a stranger to the world of tennis these days, let’s catch you up. The 2022 U.S. Open will likely be Serena Williams’ last tournament as Naomi Osaka makes her return. Nick Kyrgios, the sport’s court jester, almost beat the stiff and traditional Novak Djokovic in the Wimbledon final, while American Frances Tiafoe is bringing back electric showmanship comparable to Jimmy Connors. With these new icons breaking the mold and popularizing their on-court ’fits, brands are changing how they approach tennis fashion.

Tennis is gaining its footing as a leader in professional sports. With the help of quarantine, it became a popular social distance sport in 2020, and what to wear while playing has been on the top of everyone’s search queries lately. According to Depop, searches increased by 218% for “tennis polo” between March and July, while searches for the “tennis shirt” also peaked in July, increasing by 157% since the beginning of 2022. Interest in heritage brands like Lacoste, Ralph Lauren, and Wilson have greatly jumped in August alone.

We’ve seen this in the surge of tennis popularity throughout the ’70s, ’80s, and ’90s, when superstars like Arthur Ashe, Andre Agassi, and Martina Hingis introduced new outfits to the sport, which created a demand for tennis fashion brands to innovate.

“In terms of what professional tennis players wear on the court, unfortunately, I don’t think it’s as fun or as interesting as the ’70s. The ’70s had so many iconic and stylish players: Borg, Vilas, McEnroe, and, of course, Ashe. It was a great time for tennis fashion,” says Jack Carlson, creative director of Arthur Ashe — a new brand, not the legendary tennis player.

Arthur Ashe is a great example of a new tennis brand taking aspects of the past and broadening to a contemporary audience. The brand was founded by Carlson, who also founded Rowing Blazers, and Kith alum Karl-Raphael Blanchard — both streetwear savants — and the pair were inspired to break tradition and provide a new take on tennis style, following Ashe’s lead.

“Arthur Ashe had an incredible sense of style, and his career spanned the clean-cut ‘60s through the flashy, rebellious ’70s,” says Carlson. “He wove color into his looks in an incredible way in a sport that is very whitewashed — an apt metaphor given his status as the first Black man to win Wimbledon and the U.S. Open, in a predominantly white sport.”

However, the ’70s weren’t the only decade that inspired brands to pop up with a new design approach.

“If we are going to be real, tennis fashion peaked in the late ’80s and ’90s, Nike Court, Le Coq Sportif, Adidas, Fila… the list goes on,” says David Gill, founder of the small brand Tennis Grip. “Not to be a generalist, but no matter what any designer says, that era is where inspiration is where tennis fashion derived from. It was a different game, just like how Jordan changed the landscape of basketball wear, those brands, especially Nike Court and the Agassi collections, drive tennis streetwear. It gave life to what was initially a rather monotonous playing field.”

“From our Italian heritage to being the first to bring color to the court in the 1970s, tennis has been a core part of the brand’s DNA, and our history in the game serves as inspiration for the on-court designs and colors you see today,” says Tara Narayan, senior VP of marketing at Fila North America. Fila’s new 21-piece line is timed with the U.S. Open and New York Fashion Week, combining fashion audiences and tennis lovers alike.

Newly founded tennis brand Palmes Society also describes its pieces as “menswear with roots in tennis culture for wearing on and off court.” The small brand is masterful at appealing to a broad and stylish audience while adding a progressive tennis perspective. Recently, Palmes collaborated with the podcast How Long Gone, showing tennis apparel’s potential to become lifestyle-centric wear rather than just activewear.

“The ulterior motive for Palmes is to break down this somewhat cultural barrier of entry into tennis that I think is keeping people from exploring the sport,” says founder Nikolaj Hansson. “Palmes is a bridge between where they’re at and what the sport and its culture can become by drawing in references from the spheres of art, architecture, design, skateboarding, and more into the world of tennis.”

Other brands like The Courts, Jupp Sport, and Tennis Grip are just starting to make waves in the tennis world. The last focuses on the lifestyle or community aspect. Gill derives inspiration from vintage NASCAR and Grateful Dead T-shirts and aims to build a community that makes tennis more approachable. This includes spirituous parties or even music collaborations.

“The tennis community is not solely tennis fanatics,” says Gill. “I found that out at a young age growing up in a tennis family. My oldest brother was a tennis pro and a U.S. Open employee, and my other brother was the star of his tennis team. Meanwhile, I was OK but always enjoyed the sport the most. That is who Tennis Grip is for — the people that find joy in tennis and incorporate the world around us to make it special.”

Tennis has always been about tradition and class. However, with the help of brands trying to make tennis style more accessible to everyone, it allows all to influence the future of tennis fashion.

“I don’t think there’s anything wrong with tennis culture as such. I love the traditions, the Wimbledon gear, the unwritten rules, and all. But we just want to show that tennis can be so much more than that,” says Hansson. “And most importantly, that you shouldn't have to tweak who you are as an individual to fit into whatever the popular image of tennis is. Instead, you should tweak tennis into whatever you want it to be for you on an individual level.”