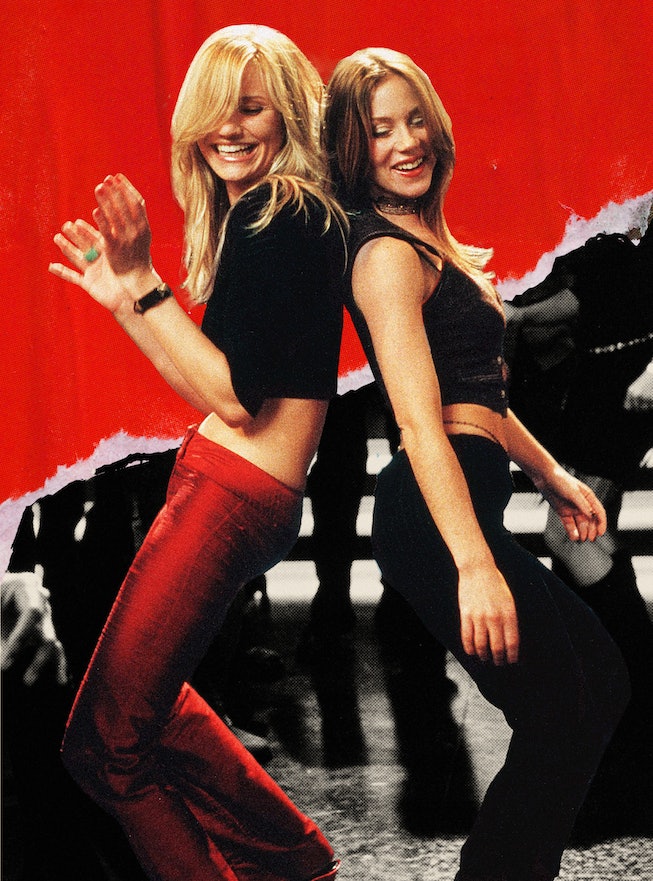 The early 2000s was a pivotal time for going-out looks. In a world filled with tabloids and an ever-growing fixation on reality TV and party girl culture, hemlines got shorter and designer logos became flashy centerpieces. The 2002 buddy comedy The Sweetest Thing stars Cameron Diaz, Christina Applegate, and Selma Blair as Christina, Courtney, and Jane, respectively — a trio of young, successful girlfriends looking for love and getting into a variety of increasingly absurd hijinks. Their night-out looks epitomize the body-conscious maximalism of the era, with a variety of outfits that wouldn’t be out of place on the pop starlets of the time.

In one of the scenes in which the friends go out clubbing, Christina wears a one-shoulder black crop top paired with perilously low-waisted shiny crimson bootcut pants, while Courtney pairs her bootcut pants with a belly chain and a cropped denim corset with a plunging neckline, and Jane wears a form-fitting leopard print dress. The complementary outfits (you know it’s the ‘00s when a friend group sports multiple pairs of bootcut pants and crop tops) feel harmonious, and the revealing silhouettes speak to the decade’s obsession with flat stomachs and unsubtle sexiness.

This group of stylish besties brings to mind Sex and the City, the ultimate blueprint for any media of the time featuring well-dressed female friends who dabble in sexual provocations. Sex and the City may have the more lasting legacy and more memorable jokes, but The Sweetest Thing remains a time capsule of both the hit-or-miss raunchy humor of the era and the trends in clubwear that, yes, are now making a comeback.

Just about every trend of the aughts makes its way into the film. Christina often wears skinny scarves, which were popular as mildly hipster accessories that served no functional purpose. She carries a variety of designer bags and she and her friends are always wearing stilettos. The look of a cropped going-out top, low-rise bootcut pants, and high heels was all the rage at the time, and it makes many appearances throughout The Sweetest Thing. It’s the kind of day-to-night outfit that contemporary fashion magazines of that era always talked up — flirty but still vaguely professional, with the heels-and-pants combination imparting just a hint of edginess.

The costuming for these three characters suits their status as sexually adventurous career women. They know how to have fun, and aren’t afraid to experiment with a bold accessory and unforgivingly tight and/or cropped clothing. In the pandemic age, these going-out outfits feel particularly appealing — what could be more luxurious than a cute top that instantly turns an outfit into something worthy of the dance floor?

The funniest fashion moment of The Sweetest Thing takes place not at a nightclub but at a quirky, small-town boutique where Christina and Courtney find themselves scrambling for wedding-appropriate outfits following a series of misadventures that have all but destroyed their clothes (long story). In the dressing room, they launch into a charming, self-aware montage that sees them dressing up in outfits reminiscent of a slew of cinematic icons. Christina swaggers in an outfit like the one Sandy wears at the end of Grease (complete with perm and cigarette), while Courtney dances while wearing a Flashdance-ready cut-off sweatshirt. Then Christina bops around in full early Madonna drag, making a strong case that should Diaz ever return to acting, she could be considered for the upcoming biopic about the musical legend. Courtney hams it up in a red gown and white gloves, inspired by Julia Roberts in Pretty Woman.

Grease, Flashdance, Desperately Seeking Susan, Pretty Woman — these are all films in which the costumes build up the characters’ confident femininity, but perhaps most amusingly, Christina and Courtney also dress in coordinated blue and orange tuxedos just like the ones the protagonists wear in the unforgettably silly 1994 film Dumb & Dumber. The bright colors, ruffles, bowties, top hats, and canes make a garish display, and this little nod to an absurdist buddy comedy from eight years earlier is an ideal fit for characters who move from contemporary glamour to ridiculousness with ease. Two decades after the initial release of The Sweetest Thing, the mix of sexy nightclub style and silliness remains the film’s high point.