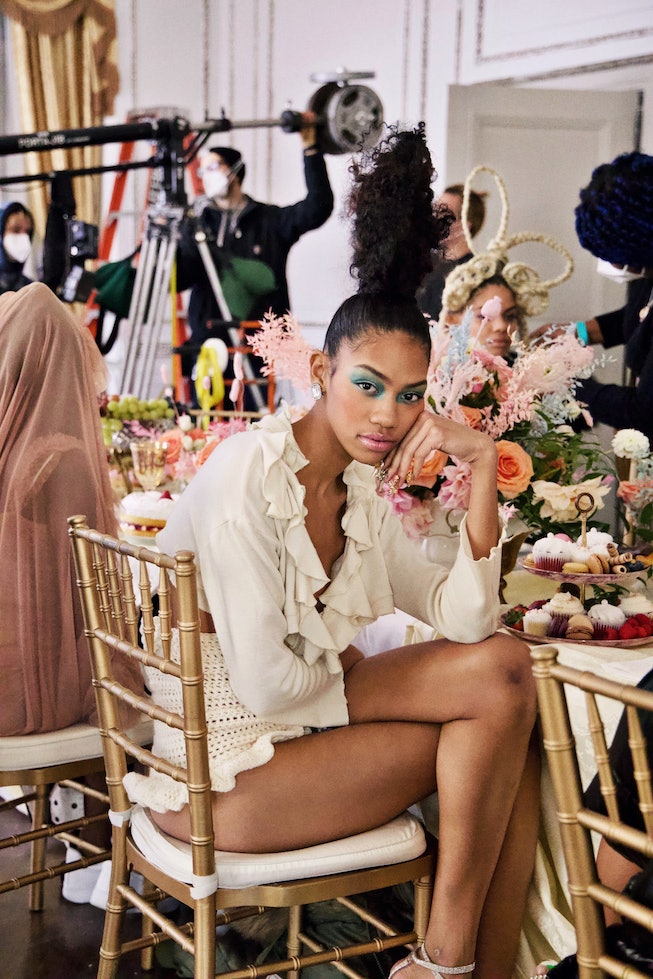 A true fashion lover knows Tia Adeola's name and her whimsical designs of sheer and ruffles that only made its official New York Fashion Week debut back in February of 2020. With traditional runway shows and presentations being a thing of the past, the young designer conceptualized and released a short film, titled Black is Beautiful, that gives a glimpse of her Spring 2021 collection, Le Noir Est Beau.

The two-minute video, directed by Nina Meredith, takes you on a journey of Black excellence with an all-Black, star-studded cast, including rapper and NYLON It Girl Flo Milli, as well as R&B vocalist Paloma Ford, as a "celebration of Black women, Black culture, and Black fashion, fused with a classical art narrative that frequently leaves them out," according to the press release.

With major influences from Adeola's days of studying fashion and art history, along with the 2006 film of Marie Antoinette directed by Sofia Coppola, Black Is Beautiful was originally thought of in the midst of the racial tensions that arose at the beginning of the summer. "This film first came to mind during quarantine and in the heat of the Black Lives Matter movement when Black bodies were constantly seen in a horrific light. I also watched the modern Marie Antoinette film for the first time and I've always enjoyed the challenge of rewriting history through fashion," Adeola shares with NYLON.

Black is Beautiful sheds a different light on Black representation. Having mixed feelings on how Black women are represented in fashion and the media Adeola "wanted to put out something beautiful that still had an important message behind it," she says. While major buzz words of diversity and inclusivity has been thrown around the industry over the past few years, Black Is Beautiful is the representation for Black people that doesn't just tick a check mark. "I think a lot of things can be performative — throwing one Black girl into a runway cast or a campaign so people won't be able to say it's not inclusive," says Adeola. "But whether it is indeed performative or not, I still think it's a step towards inclusivity, and young Black girls growing up looking to the media will feel like they can be cover girls, too."

While the actual launch date of Adeola's Le Noir Est Beau collection has not been released yet, we're still looking forward to her Renaissance-inspired collection of silky pastels and sheer gowns. As for Adeola, it's still only up from here. "I'm excited to be taking that step towards making luxury garments and being a luxury women's designer, going back to my fashion history roots and making wearable art," she says.

You can check out Black Is Beautiful now on Tia Adeola's website, or, below, with images of her Spring 2021 collection.