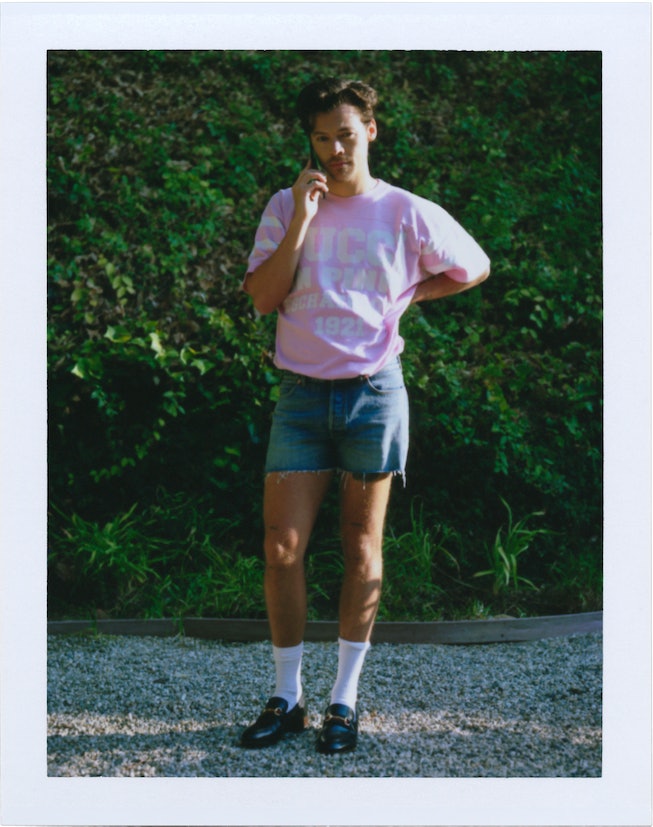 GucciFest is delivering on its promises. Fashion's lord and savior Harry Styles appeared on the third episode of the seven-part series from the brand on Wednesday, wearing a pink Gucci T-shirt, denim shorts, and black loafers with socks while taking a call on his flip phone.

Styles has been a Gucci muse for years, but his fashion choices outside of the brand have been the source of headlines lately. The singer is on the December 2020 cover of Vogue as the first solo man to do so in the magazine's 127-year history, dressed in skirts and dresses throughout his editorial.

"The people that I looked up to in music, Prince and David Bowie and Elvis and Freddie Mercury and Elton John, they’re such showmen," he told the magazine. "As a kid it was completely mind-blowing. Now I'll put on something that feels really flamboyant, and I don't feel crazy wearing it. I think if you get something that you feel amazing in, it's like a superhero outfit. Clothes are there to have fun with and experiment with and play with. What's really exciting is that all of these lines are just kind of crumbling away. When you take away 'There's clothes for men and there's clothes for women,’ once you remove any barriers, obviously you open up the arena in which you can play."

According to Lyst's 2020 Year in Fashion report, Styles was the most influential celebrity fashion star of the year. The JW Anderson cardigan he wore during a performance on The Today Show sparked a viral TikTok trend, and Victoria & Albert Museum in London is working towards acquiring his famous sweater for its permanent collection.