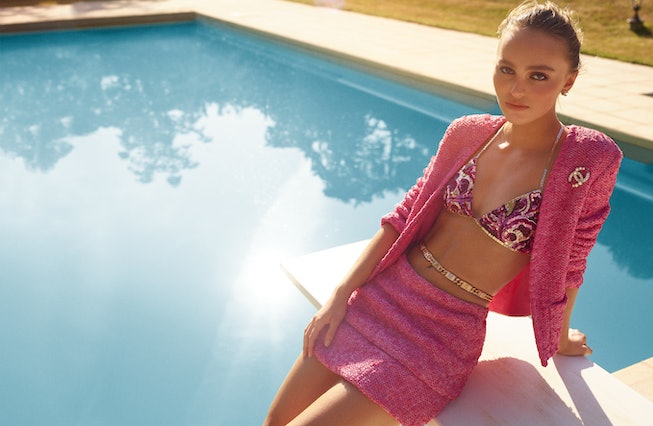 When Lily-Rose Depp first came on the scene when she was just 15 years old, it turned the fashion world upside down. The then-teenager has gradually made her way to front rows of fashion shows, best-dressed lists, and even made her runway debut with Chanel, with which she's become the youngest brand ambassador to front the French luxury house's global campaigns. The 21-year-old French-American actress is the star of Chanel's Cruise 2021 campaign, and she takes us behind the scenes in a new video revealed on Friday.

Filmed back in June of 2020 near Paris, the short film features Depp decked out in a fuchsia-colored tweed skirt set, along with other Virginie Viard-designed looks while she shares her thoughts and favorite pieces from the collection. "I think the accessory, to me, that reflects my personality the most would be the little basket bags, because they're very reminiscent of going on vacation and having your little beach basket," she says

Describing the mood of the campaign as "effortless, intimate, and spontaneous," Depp truly brings a sense of playfulness and relaxation through the campaign imagery, making you wish you for an upcoming Parisian getaway. (For now, we'll watch Emily In Paris to fulfill our wanderlust instead.)

You can check out the full video and more images, below. If you're looking to shop some of Depp's favorite pieces, too, now is your chance. The Chanel Cruise 2021 collection is available in stores starting on Tuesday, Nov. 17.