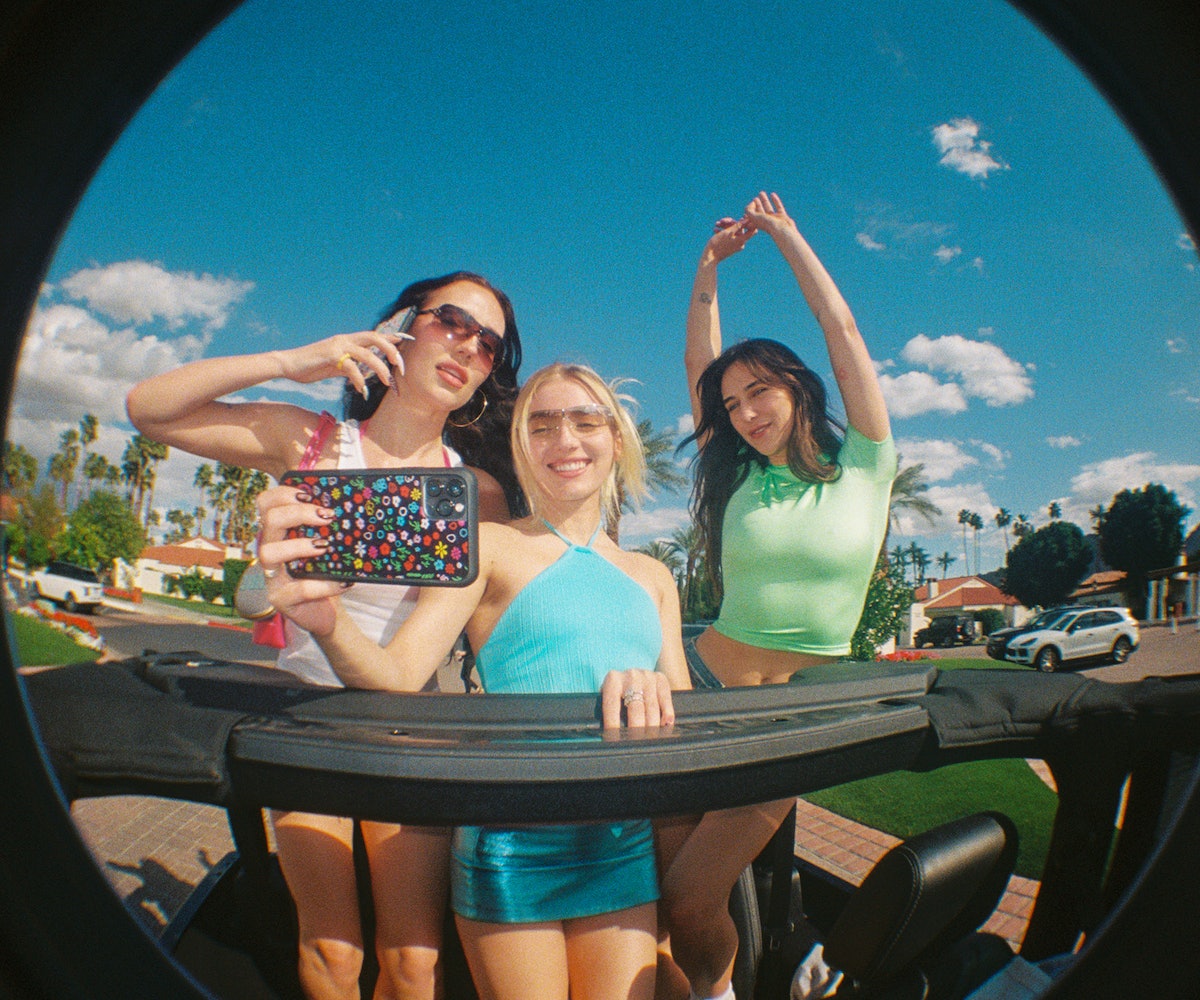 Festival season is finally upon us, and not only does that mean good music from our top favorite artists, but the outfits from attendees are expected to be the best they’ve ever been. For many who haven’t seen live music in years, prepping for a full weekend of it might be daunting, and don’t even get us started on the outfit planning.

Ahead of Coachella’s comeback, Devon and Sydney Carlson dropped their newest Wildflower Cases collaboration with the longtime music festival, along with a campaign starring Lexie Jayy, a Coachella creative and co-founder of popular plant-based food joint Monty’s Good Burger.

The limited-edition phone case collection takes inspiration straight from Indio, featuring whimsical ‘70s-inspired doodles, like desert florals and Coachella’s iconic Ferris Wheel. Coming in two colorways — white, to represent daytime, and black, an homage to the night sky in the desert. With prices between $35 and $37, the cases will be available to shop online on Wildflower Cases’ website and at the Coachella merch tents during both weekends of the festival.

“We actually came up with the idea the last time Coachella was supposed to happen, which was two years ago and that was when we designed the case,” Sydney tells NYLON. “It was going to be released but then it got canceled, so we’ve been sitting on these for two years and I’m so happy now that we’re releasing it because they’re still just as cute as they were two years ago.”

After a number of postponements and its eventual cancellation in 2020 and 2021, the anticipated return of Coachella is a pretty big deal, to say the least. “There’s a lot to consider ahead of the first weekend,” says Lexie. “I think that it’ll be more emotional on top of it being a fun weekend because we’re finally going to see people come back to the desert and do their thing after so long. While it can be intimidating because Coachella is known as a fashion-forward festival, I’m excited to attend.”

With the arrival of Coachella officially kicking off festival season through the summer, Sydney Carlson and Lexie Jayy spoke with NYLON about their prepping tips, outfit planning, and more.

Planning what to wear for an entire music festival weekend can definitely seem intimidating, but coordinating your outfits ahead of time gives you the flexibility to get your shopping needs in order and make any last-minute alterations. Sydney recommends setting up mood boards as soon as possible. “Every year, I've made mood boards so far in advance, even starting weeks ago, to pick out outfits and try to get the vibe I want. That’s always a ritual that I find myself doing,” she explains.

If you’re not an early planner, don’t sweat it. You can still wing it when it comes to clothes. “I never have outfits 100% established the day of because I can never predict my mood before then,” says Lexie. “But I usually pick out a statement piece or two I know I want to wear and then go into my closet to figure out what feels the most like ‘me’ that day.”

Festival Season Pro Tip No. 2: Don’t Rely Too Much On Trends

This might be a little tricky to avoid but when it comes to prepping your festival ‘fits, it’s best to stick with what you know. Social media is clogged with an endless amount of micro-trends, so there can sometimes be this pressure to incorporate what you see on your feed into your wardrobe. “I try to stay away from looking up festival fashion online because I think it gives people tunnel vision and this sort of ‘copy-paste’ look that isn’t authentic to anyone,” says Lexie.

Instead, she recommends opting for pieces that are not only stylish but practical as well to get you festival-ready. “My advice is to do online shopping as if you’re going to a fun party instead of a festival but ask yourself, ‘Is this practical?’” notes Lexie. “People feel pressured to dress in costumes for Coachella and other festivals, but you can definitely tweak it for the desert and make it more comfortable instead. People get too pressured to wear statement looks but do you!”

Some of her must-have items at the moment include the Ganni motorcycle boots, which “are these thick combat boots [that] protect my toes and balance out such a badass outfit,” and Elta MD sunscreen.

OK, so you have your mood boards set up and your shopping carts filled, but something seems missing. Accessories are arguably the most underrated part of an outfit, and if you’re looking to stand out amongst the festival crowd, we recommend sourcing unique pieces from indie brands or via secondhand. “I’ve been really into a Depop and finding small brands on there that have really cool stuff. I’ll come across stuff that I’ve never seen before and you can get one-of-a-kind pieces for such a good price on there,” shares Sydney. “Even my sister Devon got me into eBay recently because she goes so deep into it and finds the rarest stuff and honestly, it’s just fun to do while passing time.”

Lexie already has her go-to items ready for the weekend. “When it comes to accessories, I’m excited to wear this brand called Shuuulian. They do these cool acrylic jewelry and add images inside. It’s also super light and has movement,” she says, adding that it’s still important that accessories are just as comfortable, too. “Another thing I’ll definitely wear is sunglasses, especially at night because it’s dusty. I’m always wearing my mom’s Dior glasses from the ‘90s and it’s clear with silver framing. It’s so good to keep the dust out of my contacts and elevates my outfit at the same time.”

Festival Season Pro Tip No. 4: Make Sure To Bring These Emergency Items, Too

Outfits aren’t the only things you should plan to bring with you for the weekend. With music festivals happening all day (and night) long and in warmer weather, there will most likely be some unexpected circumstances to arise. For instance, you might want to swap out heeled boots for more comfortable shoes. In that case, Sydney shares that you should pack another pair of footwear with you. “Actually, my friend Elana had this zipper pouch on her the other night while attending the Charli XCX concert, and inside it was a set of ballet flats for when her feet started to hurt. I was so mindblown by that!”

Plus, at the end of the day, taking care of your health throughout the festivities is most important. “With festivals, you get so excited to be there and do a bunch of stuff during the day. But you forget to take care of yourself throughout it all, which is really important, like sitting, drinking a lot of water, and making sure you’re eating. You’re going all day and all night and it can be a lot on your body, especially for people who haven’t really been doing stuff the past two years,” says Sydney. “I think it might be harder this round since your body isn’t used to it, so taking care of your it is my advice. I’m trying to start now and get ready for that because it definitely has been a while since I’ve been in the heat for a whole weekend.”

NEXT UP
Fashion
Jenna Ortega Is The Face Of Adidas’ Newest Line
Fashion
The Best Celebrity Fit Pics From Paris Men’s Fashion Week
Fashion
The Wildest Front-Row Looks From Couture Week In Paris
Fashion
Rosettes Are 2023’s Biggest Trend — Here’s How Celebs Wore Them in the 2000s
Style + Culture, delivered straight to your inbox.