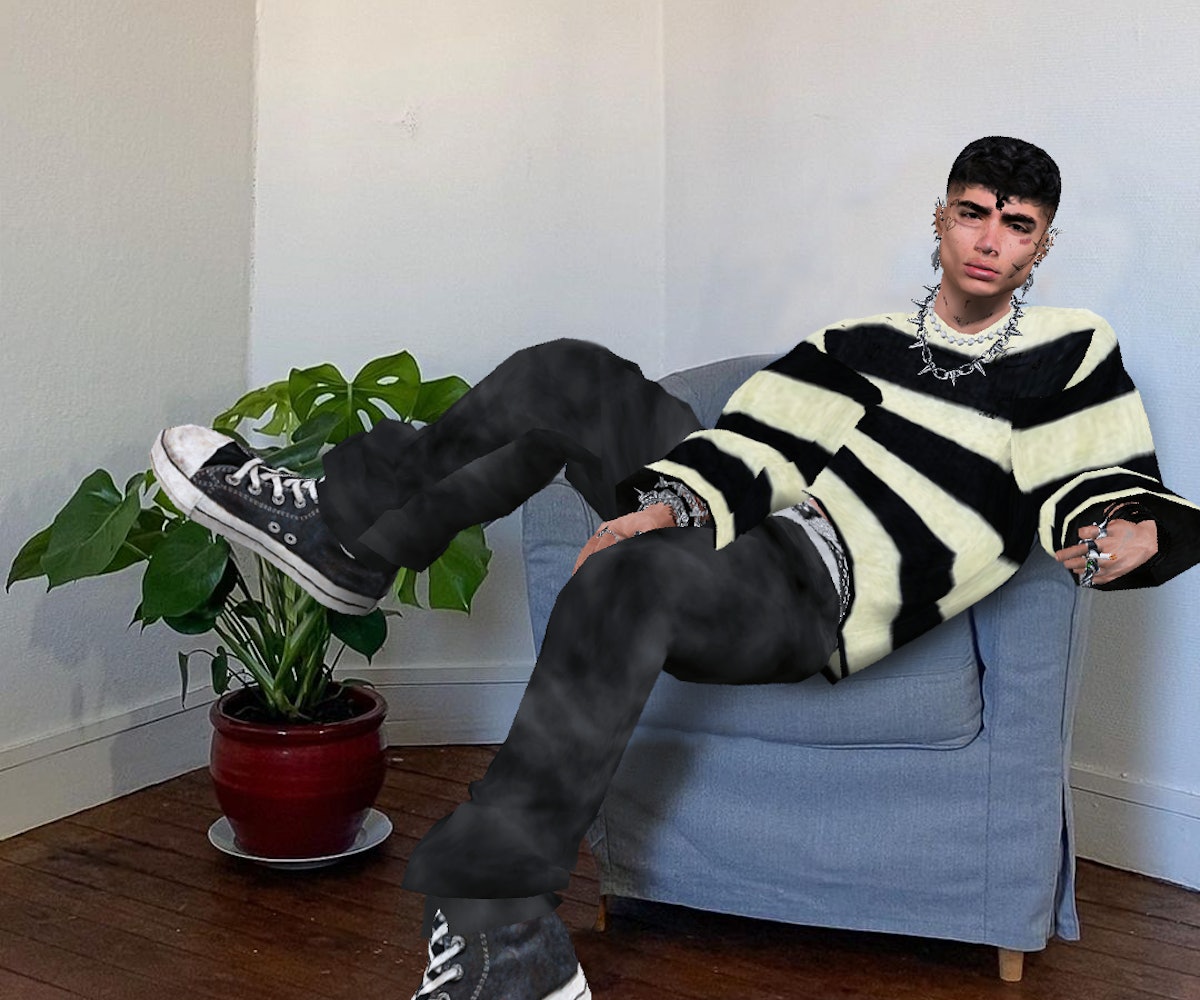 Lil Wavi is your typical Instagram-famous hypebeast model, complete with face tats and a penchant for streetwear and cyberpunk jewelry. The only thing that separates Lil Wavi from the hundreds — maybe thousands — of other boys exactly like him is that he's technically not real, at least not in the human sense of the word.

Developed by British multi-hyphenate creative Wolf Groom, Lil Wavi was designed to be a model for Groom's clothing brand, Waviboy. "When I first created my streetwear brand, I was 17 and was beginning to come to terms with my intense addiction to gaming," Groom tells NYLON. "I guess I was looking for a positive outlet that I could channel that same experimental energy into." That energy ended up manifesting in the form of CGI influencer Lil Wavi, who has nearly 16,000 Instagram followers and counting — not too bad for a guy who doesn't "exist."

More than just another digital avatar made by a creative looking to cash in on fashion's obsession with the virtual realm, Lil Wavi was born from Groom's realization that she could utilize the elements of gaming that she loved, along with her Photoshop and video editing skills, in a far more practical way.

"I wanted to merge my interests together and break the boundaries of fashion to get better connected to my digitally-orientated Gen Z audience in a new and fun way," says Groom. Enter, Lil Wavi. Within just a few weeks, the Instagram followers were racking up steadily. "I gained a vast new audience who really vibed with the concept and enjoyed seeing a digital character wearing clothes that they related to, especially within the realm of Instagram," Groom observes. "I guess they liked seeing a new aesthetic and a tunnel into an escapist world merging with the physical reality, which created a more intimate experience."

When our social media feeds are overflowing with cookie-cutter influencers, it's pretty refreshing to come across someone who’s a bit different during the endless doomscrolling. Lil Wavi is the definition of thumb-stopping: There's something about his icy blue eyes, sculpted six-pack, and his gleaming grills that sucks you in through your phone screen and transports you into his reality. "I first began experimenting with his 'upgrades' to make him more 'realistic' to encourage a greater connection between my audience and him. I wanted them to view him more humanlike, similar to the likes of Lil Miquela and Shudu, as I could see the success in both of these influencers and their creators," says Groom. "However, after a couple of months of his new upgrade, I just really wasn't vibing. To be honest, neither was my audience," she later admits.

Instead of logging off, Groom used this experience to figure out what the audience did vibe with. "Instead of focusing so much on what Lil Wavi looked like, I instead began exploring how I could bring him further into our reality in different ways to blur the lines of the digital and physical world. I did this through collaborations with other influencers." With that, Lil Wavi was granted his own digital passport, allowing him to turn the whole universe into his personal virtual playground. He's at Sneaker Con in Shanghai one day, Ben Elliot's Shop exhibition in Paris the next, and hanging out with other influencers on Earth during the time in between.

Fashion's love affair with digital avatars isn't an entirely new concept, but it's certainly been exacerbated by our lack of physical, well, anything, following the COVID-19 outbreak. The pandemic forced many industries, including fashion, to rethink traditional structures and venture into virtual realms as our interactions in the real world became limited. Who can forget the Animal Crossing hype during lockdown 1.0 or, more recently, the fashion-gaming crossover that saw Gucci collaborate with The Sims and Balenciaga announce its Fall 2021 collection will be showcased via video game? Luxury fashion has historically been bound by rigid traditions, but digital technology levels the playing field.

"I see virtual influencers as a new way to connect with audiences and enable limitless possibilities," Groom muses. "A brand could create its own virtual influencer with its own persona, its own identity, its own story, and its own moral compass; ultimately acting as the embodiment of that brand's ethos and vision." The benefits aren't strictly limited to digital beings, either. If you can create virtual entities that exist and live a life online, why can't you create virtual landscapes that humans can be a part of, too? Groom argues, "From an individual perspective, it allows people to experiment with who they are and access items, environments, and worlds that they cannot in the physical world."

This theory proves that digital exploration goes far beyond just brand and consumer interactions. If we've learned anything this year, it's that as much as technology has been a salvation that's allowed us to continue working remotely and keep in touch with friends and family, it’s also highlighted our very real, very human need for tangibility. We can't live entirely online and wholesome trends like cottagecore indicate many of us do crave a simpler, screen-free life.

"I believe our individual and collective experiences will alter our long-term behavior patterns, wants, and needs," Groom shares, reflecting on the upheaval that 2020 has spurred.

"People want to feel solitude again; they want to escape to the countryside and feel in touch with a more natural, physical environment." But as Groom suggests, this is unlikely to come at the expense of digital technology. In fact, it's far more likely that we'll discover how our online and offline lives can enhance one another in a healthier way. "I feel there's going to be a huge emphasis on the boundaries we try to create between the physical and digital realm; in particular for our digital world to enhance our physical world, rather than replace it this time," she says.

But while we're busy trying to balance the IRL with URL, digital technologies are evolving each day. CGI avatars are innovative by their very nature, but the latest advancements might see them become that little bit more human — at least that's what Groom thinks. "For virtual influencers, I feel it's necessary to invest in new technologies, so they can embody a physical presence and create multi-sensory experiences for their audiences," she predicts. "People are craving realness and are pivoting towards influencers who offer that so, fundamentally, virtual influencers must foster this kind of relatability, openness, and honesty."