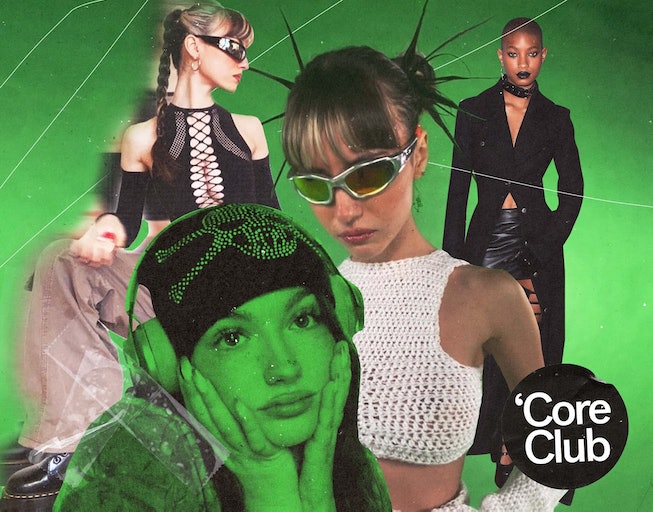 Whether it’s a fashion trend on TikTok or a certain style taking over Instagram, internet aesthetics are always changing. Our series ‘Core Club breaks down the looks that you’re starting to see a lot on social media and highlights the people and brands channeling it best. Next up: Y2K Cybercore.

The Y2K revival has been in full swing over the past few years, regardless of its polarizing reception, and now cybercore is another fashion aesthetic slated to make a return. The style is heavily influenced by the early days of the internet, boasting a mix of techwear, cyberpunk, and classic 2000s fashion. Bella Hadid, Amelia Hamlin, and Willow Smith have been sporting cybercore in their street style as of late, while TikTok’s #cybercore hashtag has garnered more than 69.8 million views at press time, along with #cybery2koutfits having at least 11.7 million views. The “It” girl of the moment, Julia Fox, has also been consistently dressed in a sleek, latex version of cybercore in recent months.

Cybercore is a mixture of futuristic and sci-fi-inspired fashion that’s also nostalgic for the past. A lot of cybercore is influenced by photoshop, the appearance of digital editing, and old web aesthetics, such as GIFS, video games, and clip art that expresses the internet culture of the mid ‘90s to the late ‘00s. This trend has been bubbling up in the fashion space for years — back in 2018, models like Hadid and Kendall Jenner helped to popularize tiny sunglasses inspired by the 1999 classic film The Matrix, and runway collections from the likes of Balenciaga, Vetements, and Balmain featured black, floor-length leather or PVC trench coats, sharp, monochromatic suiting, and digital, tech-inspired prints.

“Movies and music videos from the 2000s inspire my cybercore,” fashion student and content creator, Andra Rotaru, shares with NYLON. “Growing up I used to listen to Blaque and TLC, and the music videos still inspire me to this day. I’ve been rewatching the Zenon trilogy that came out in the late ‘90s and early 2000s and they’ve made me feel nostalgic, but I also appreciate the styling and wardrobe in the movies.” Rotaru also cites the style of half-bleached blonde hair, gamifying fashion, and Japanese street style as other major influences on cybercore. There’s also an increase in content creators posting selfies and taking videos of themselves using older cameras and other early-2000s tech accessories. The now-trending “It” headphones from Apple have not only become a stylish status symbol, but they also give a sense of Y2K nostalgia.

“Bright colors, rhinestone everything, and metallics are essential staples to achieve the cybercore aesthetic,” content creator Charlotte Chiasson tells NYLON. Destiny’s Child and their iconic matching rhinestone-embellished, low-rise jean sets immediately come to mind. “A lot of what was popular was heavily influenced by Black culture. Many Black rappers at the time influenced this style through the use of metallic clothing and bling, with light blue colors and futuristic vibes,” adds Chiasson, who also sells style bundles to people looking to channel the aesthetic.

The technological advances of this era were mirrored through the clothing, as well, influencing the rise of cybergoth, cyberpunk, and cyberpunk rave as sub-genres of the aesthetic. The unwritten rule of fashion is that it cycles back every 20 years and the revival of cybercore falls under that. “It was only a matter of time for the cybercore style to make a resurgence in our culture,” notes Chiasson.

More nods to various styles within the umbrella of cybercore that’s increasing in popularity include goth, rock ‘n’ roll, and punk styles. The Digital Fairy, a creative agency that specializes as internet and youth culture specialists, label this particular sartorial movement as “The Chrome Hearts Effect.” Gothic crosses, scripture writing, and tattoo-heart imagery are main components of this style, which first gained recognition when ‘90s rock stars — Motley Crüe, Guns N’ Roses — wore the Los Angeles-based brand out in public. “Cyber Y2K tends to be reminiscent of what might be worn to a Nickelback concert in the 2000s — but in the best way,” Biz Sherbert, Culture Editor at The Digital Fairy tells NYLON.

Cybercore is the next wave of Y2K fashion that is nostalgic for an era whose technological advancements have been greatly surpassed today. Whether the style is paying homage to early (and outdated) internet culture, the coveted style of Black girl groups, or to the gothic elements of rockers’ wardrobes from the early aughts, the hodgepodge aesthetic is collectively on the rise. Though cybercore is now sleeker and more polished than it ever was before, the aesthetic’s fashion stylings take relics from the past and alter them to bring us into the future.