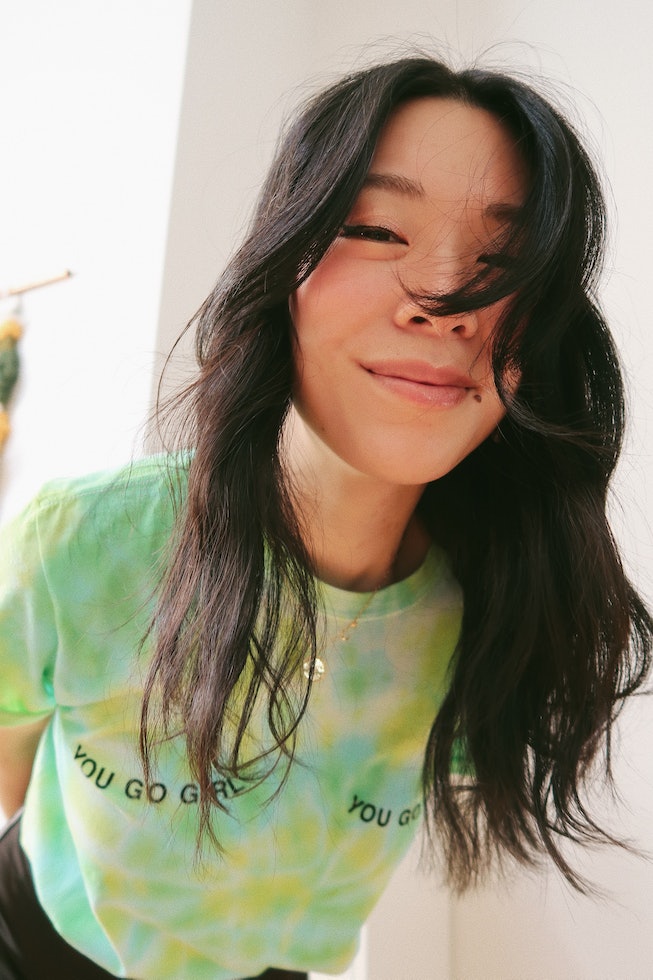 Courtesy of With Wendy

"Your girl made her own hat out of Delissio pizza boxes," jokes YouTuber With Wendy. But for real, she did make a hat out of old pizza boxes, then covered it with reversible sequin fabric, added beaded fringe, and even installed a mechanical ring that opened and closed just like Billy Porter's remote-controlled Baja East hat from the 2020 Grammys, along with three other of "the fanciest red carpet accessories" that she recreated for one of her videos.

With Wendy, who hails from Toronto, Canada, is best known for her fashion series, "Can She DIY It?" From scratch, she's reproduced Billie Eilish's signature looks, Timothée Chalamet's glittery Louis Vuitton harness, a Cecilie Bahnsen-style quilted coat from a $13 thrifted blanket, and a mini backpack by the beloved "VSCO girl" brand Fjallraven, which happens to be one of her most popular DIYs. In a recent video, she took a stab at making a corset top at the request of her one million-plus followers, modeling her own after a Dion Lee version worn by Bella Hadid.

"If you follow my steps and learn from my mistakes, hopefully you'll be able to make it, too," says Wendy at the start of the video, which documents her three-day DIY journey compressed into 10 minutes of footage. "Day 1: Mood is confident and calm," reads the text across the screen, followed by "Day 2: Doubt creeps in, 'I am now second guessing all of my decisions!'" and finally, "Day 3: Protecting myself from discouragement." In the end, she shows off the results: a strikingly similar replica of the designer-name corset, save for a mistake that she openly admits to her viewers. That slight error doesn't matter, though, because she made the entire freakin’ thing herself, and we satisfyingly witnessed the process from start to finish.

That's what's so appealing about Wendy. She doesn't claim to be an expert in her craft; her mom taught her how to sew when she was a kid, and she didn't pick it back up again until college. "I really just wanted to have a YouTube channel and I didn't know what it would be about," recalls Wendy over the phone with NYLON. Back then, about 10 years ago, popular videos were mainly how-tos and tutorials. "So I was dead set on teaching something. Is there anything that I know that is interesting or helpful to other people? And, truly, the only thing that came to mind was that I could sew," she says. After six years of making videos as a hobby through college, graduating, and having a job, she decided to pursue YouTube full-time.

"At first when I started, because I was selling this 'how-to' mentality, I needed to present myself like I know what I'm doing. I should be an expert," explains Wendy. "If I have no clue what I'm doing, why would anyone watch me?" Her early approach didn't work well with her audience, as comments on her videos would correct her technique. "I got more comfortable being transparent with people that I don't have any professional training in sewing. Over time I realized that was actually my strength. I should just journey with my audience instead of feeling like I have to be the one leading them the entire time," says Wendy, who describes her YouTube channel as a "feedback loop" that's helped improve her sewing skills over the past decade. "I really don't think I would have gotten to this point if it weren't for just being willing to continue to read the comments, see what people are saying, and let that cycle keep feeding."

That vulnerability is what strikes a connection between Wendy and her followers. And as someone who has zero feedback to give when it comes to sewing, her videos can be a calming and soothing experience. There's nothing more gratifying, especially during an unpredictable time like now, than seeing someone achieve a goal — even if that goal happens to be a fluffy tulle dress. It's much like how Bon Appetit's "Gourmet Makes" video series has grown a cult following around its charming host and pastry chef Claire Saffitz, who attempts to make famous mass-produced snacks and meals from scratch — mistakes, happy accidents, victories, and all.

When this comparison is brought up to Wendy, she responds with excitement. ("Too high of a compliment," she says; a photo of Saffitz is literally on her mood board.) "The peaceful, calming stuff was never ever my goal. That was actually the most surprising piece of feedback to come from my audience," says Wendy. "It's even more surprising because everyone in my life knows me as pretty loud and boisterous. But I kind of just lean into it now because, well, sewing is an extremely patience-trying craft."

As stay-at-home orders continue to be enforced, Wendy has noticed one of her older videos on sewing machines has been receiving a steady uptick in views and comments since March. Most likely due to the high demand of cloth face masks and PPE for frontline workers, but also because DIY fashion has taken off in quarantine, especially among Gen Z, from tie-dyeing at home and TikTok videos to designers offering DIY kits or contributing to the New York Times’ “Designer D.I.Y. at Home” series.

"I sadly in the past even joked that the best thing to ever happen to my channel would be a sewing renaissance, and now, weirdly, a sewing renaissance is happening, but it's not what I asked for, I promise," says Wendy. "It's cool that people are getting interested in sewing as a hobby. I really hope I can be a happy and healthy introduction, and try to demystify it and make it not so intimidating for people."