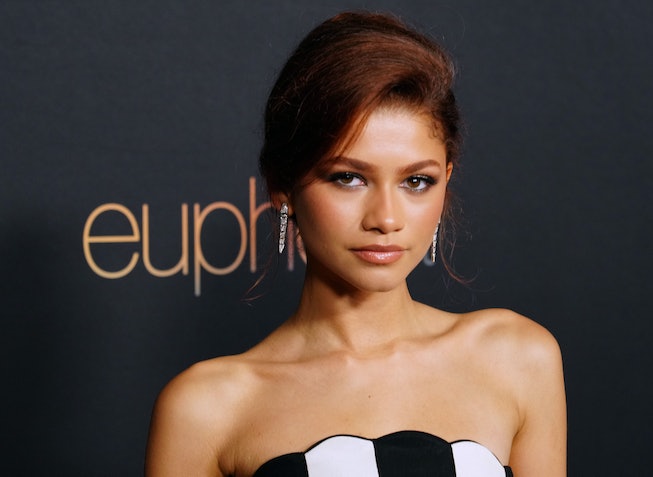 Since joining Valentino as its newest face in 2020, Zendaya’s major fashion gig is still going strong, as she stars in the Italian fashion house’s Spring 2022 campaign, titled “Rendez Vous” and revealed on Wednesday, Feb. 16. The new campaign — Zendaya’s third for Valentino — arrives a few months after she wore a custom-made sparkly webbed ensemble by the luxury brand to the Spider-Man: No Way Home premiere in December 2021.

Taking inspiration from the concept of motion along with intimacy and one’s social relationships, the newest Valentino campaign features Zendaya at the Warner Bros. Studios in Los Angeles. Surrounded by buildings and a staircase as a backdrop, the Euphoria star is seen posing in an electric blue silk top tucked into a pair of blush pink trousers. She was also styled in a pleated fuchsia cape-like silhouette, which was tied in the front, along with a purple handbag as a final touch.

In another set of photos circulating on Twitter, Zendaya was also captured wearing an embellished white top which she wore along with baggy denim jeans and brown studded sandals, finishing off with a white Valentino Garavani handbag.

In addition to the “Rendez-Vous” imagery, Valentino will also premiere Zendaya’s official campaign video on Thursday, Feb. 17. Dancing in the clip to The xx’s 2009 hit song “Crystalised” and inspired by ‘80s-era films, the camera follows Zendaya as she floats from the studio’s backstage to the sunny streets of L.A., featuring cameo appearances from Valentino’s Pierpaolo Piccioli and the actress’ go-to stylist Law Roach.