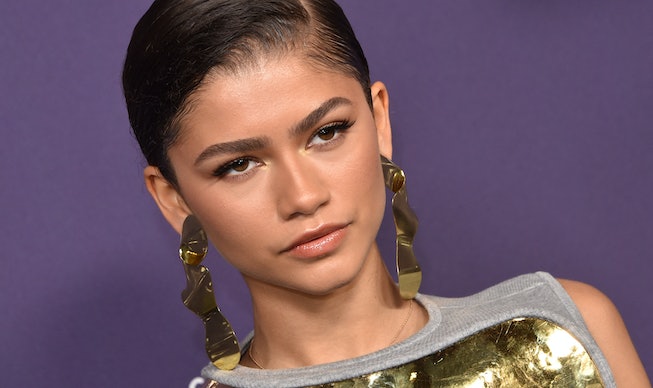 Zendaya returned to the red carpet with yet another mesmerizing look. Following her 2021 Venice Film Festival appearance in a custom “wet” Balmain gown, the Euphoria and Dune star shined at the 2021 Women In Film (WIF) Awards in Los Angeles on Wednesday, Oct. 6.

Her look, a gray sleeveless gown adorned with a gold breastplate, came straight from Loewe’s Spring 2022 collection, which only debuted less than a week ago at Paris Fashion Week on Friday, Oct. 1. Styled by her longtime image architect Law Roach, she completed the ensemble with gold pointed pumps from Christian Louboutin and matching gold statement earrings.

On Instagram, Roach posted a video clip of the actress arriving at the event, with the caption “She was the Queen….. @zendaya wearing @loewe SAY SOMETHING???”

Zendaya received the Crystal Award that night, which celebrated her efforts and work towards a more inclusive entertainment industry.

“When you open the door, your job is to open the door and jam it open for other people to come in,” she said during her acceptance speech. “I encourage everyone in any kind of position of power to give people opportunities, to show that they can do what they do. Give them the time to shine, give them a moment because that’s all it really takes — and allow them to network and meet other people and be in spaces and rooms and get paid.”

Known for her jaw-dropping looks over the years, this isn’t the first (or last) time Zendaya was seen turning heads on the red carpet. Back in January 2020, the actress previously wore Tom Ford’s hot pink two-piece set to the 2020 Critics’ Choice Awards, which also included a custom metallic breastplate.

See Zendaya’s Loewe look at the 2021 Women In Film Awards red carpet in more detail, below.