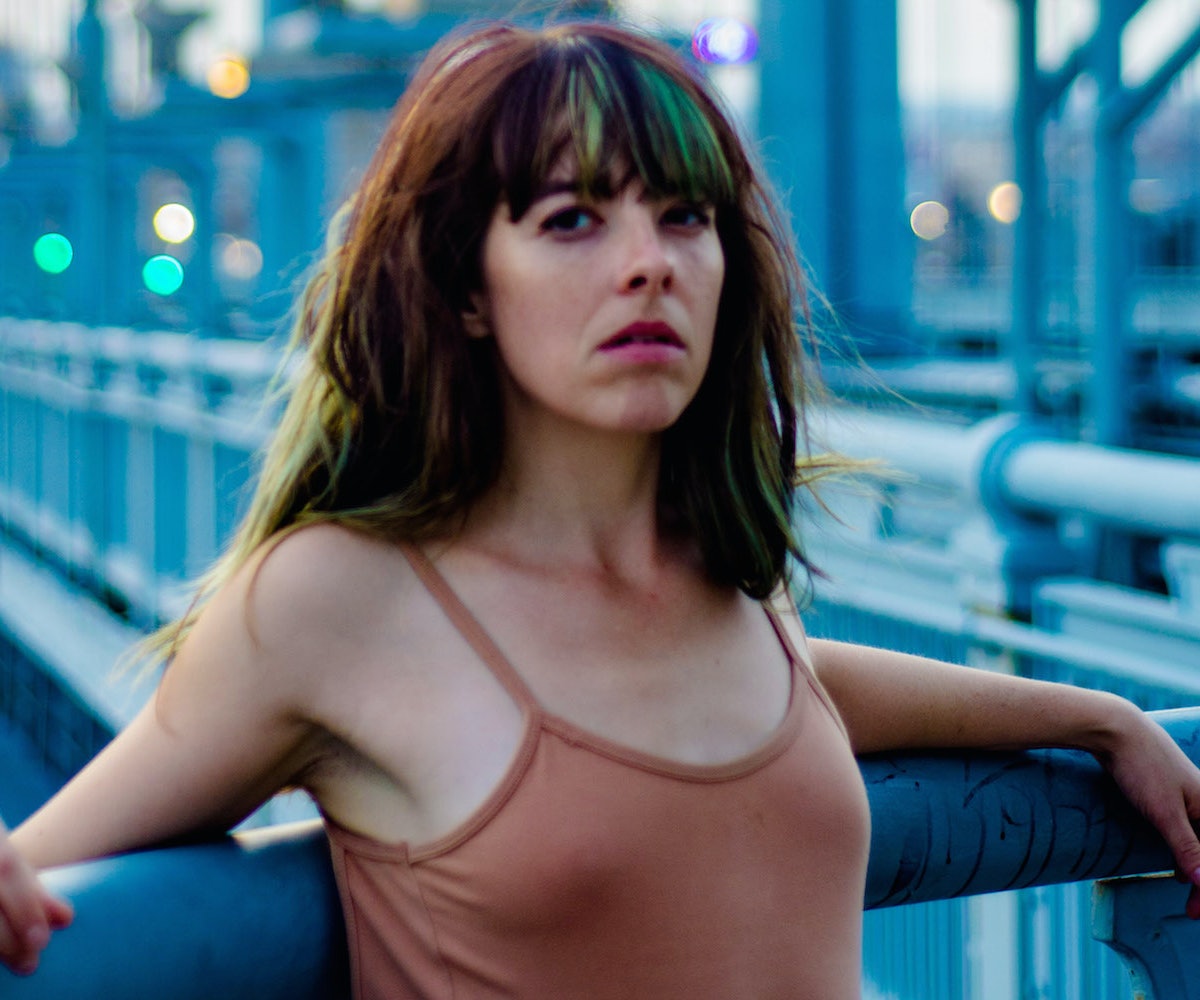 If you've ever wondered what it would sound like if Hop Along shed its indie-rock exoskeleton, Frances Quinlan's debut solo album, Likewise, is a pretty satisfying answer. The indie-rock band's lead singer has kept her frequent collaborators in arms reach, and her project still features the same familiar faces; Hop Along guitarist Joe Reinhart was Quinlan's co-producer, and drummer Mark Quinlan and bassist Tyler Long also played on the record. But the core of Likewise comes straight from Quinlan herself.

"I've come to realize that I am increasingly identified by my job, a career," she reveals over coffee at a hotel café in Manhattan. "That's fine, I love it. But in realizing how much songwriting has shaped how I spend my days... I like the idea of writing songs that change in composition in the studio, more so than in a series of edits; Hop Along is very thorough."

Likewise has allowed Quinlan to indulge in a tender and playful approach to songwriting, exploring the possibilities that could come to life when she abandoned the band's more diligent process. The record pushes past indie-rock to let Quinlan sink her teeth into emotional arcs of lush harp and strings on "Detroit Lake," and playfully sing over fluttering synths and disco beats on "Rare Thing." Molly Germer, a closer collaborator of (Sandy) Alex G, provides several moments of sweeping violin accompaniment.

There's no way to divorce the inherent rocker grittiness from Quinlan's lyric delivery though; her vocals are just as cutting and weathered as ever. But where Hop Along's 2018 album Bark Your Head Off, Dog was confined by its genre-d ecosystem, limiting its sonic exploration, Likewise drops the standard guitars-and-drum formula, and gets appropriately carried away in the new.

Ahead of the release of Likewise, NYLON sat down with Quinlan to discuss her solo debut and finding inspiration outside of Hop Along.

Is there a different pressure that you feel writing for Hop Along versus writing under your name?

If anything, there's more pressure now. I'm very proud of what Hop Along has accomplished. I'm proud of all the work we've put out. I'm still working with Joe, and Mark and Tyler are on the record, still coming up with brilliant parts, on "Rare Thing." Mark's also on "Lean", Tyler's also on "A Secret." There's certainly a level of pressure, under my own name, with no band name in front of it. For me to live up to what we've all worked on so hard together, it's a tall order. I'm increasingly conscious of that expectation.

All of the arrangements have a certain openness, a newfound vulnerability that doesn't necessarily happen often on Hop Along records — what inspired that?

I knew I didn't want to make a strictly acoustic guitar album, I wanted to use the studio. Headroom Studios, which is where we've been working since Get Disowned, is an amazing space with great tools at hand, and I wanted to use them. When Joe and I got together to do "Now That I'm Back" — that's the first song we got together separately of Bark Your Head Off knowing the intent of doing this solo album — we laid down my guitar to figure out the BPMs. We did a scratch vocal; we started layering and synths.

When we were recording and layering all these things, at the end, we had to lay down a tremolo guitar, and then Joe called me into the control room and said, "Check this out." He had taken out the first guitar, and it transformed the song completely. Once he did that, I said, "Let's do that as often as we can," 'cause that's great. It was so much fun to go to these crazy realms.

After experimenting with so many new sounds on Likewise, what would you like to play with more on future projects?

I would love to get better at keys. Joe generally plays keys in Hop Along and comes up with great parts, but I would love to use that as an initial writing tool. "Your Reply" was the first time I had written a piano part [before] going into the studio. I've played piano on songs, but it's usually this horrible time-waster… time that should've been spent at a piano somewhere else, not at a nice studio figuring out what a part should be.

Which song on Likewise was most difficult to write?

I could tell you which one was most difficult to finish. They were all written before the studio. I didn't come in with any unwritten songs. "Rare Thing" was a pretty big departure as far as instrumentation. That song took a minute, I had to change the words in the chorus… that was really driving me nuts.

The hardest one to finish was "Detroit Lake," that one was a head-scratcher. It's tough when you record certain things ahead of the others. We had two sessions in 2018, and "Detroit Lake" was recorded during one of those. Then, when we worked on the other songs in February, we came back to it, and that can often be a challenge: I lived with this as an idea for so long, how do I bring it home?

Tell me about how "Went To LA" came together.

I've been referring to it for so long as the most bitter, angry song on the album, which in one sense it can be. But it's also the most abstract, because I'm talking about one character at certain points and then at others, it's like I'm just jumping in time. It is a time-traveling piece because I started it so long ago. "Heaven is a second chance" was one of the first lines, and it might have even come from another song.

My memory is terrible, so for me to say the exact impetus of it is a challenge. I finally saw in person the painting "Satan Devouring His Son" by Francisco Goya, and I remember hearing he had secluded himself on this farm [in his later years]... His life was wild. And he went deaf. Goya was a big inspiration for parts. I don't know why he ended up making an appearance in [the album,] but it doesn't feel wrong.

In that song, I was certainly embracing how good certain imagery felt, and I didn't worry too much about a specific meaning being garnered. I think it's definitely a lot of emotions, despite the virtue of it taking as long as it did to write. I listen to it and hear myself going through all these phases, or chapters.

Is that generally how you approach writing music, or does it come together quicker?

It varies. I'm realizing now, sometimes, all you need is a hard deadline, and for Likewise, it was the first time I ever had any other project besides Hop Along, and so suddenly I felt like, Well I can't lollygag, I have a band. [The record] has to be done in February — we go on tour, and I wanted to be done before we went on tour again. A hard deadline is like school. If I didn't have grades and hard deadlines [in school,] I wouldn't have ever finished anything; I was so scared of getting a bad grade, thank goodness. I was a nerd, I guess. A dork.

What inspired the album title?

I love the way it sounds. Hop Along albums have often been a certain number of syllables or more. I like three syllables for those. I was like, Well it can't be three. And it can't be as many as Bark Your Head Off, Dog. It would be cool if it was one, [but] I couldn't find a one-syllable word that felt right. But Likewise felt really nice. That inner rhyme, first of all, feels great.

And I've been saying, too… what a nice thing to say to a person, "Likewise." And it's usually when you first meet somebody, that's the thing you say. "Nice to meet you." "Likewise." I agree, and we're having a harmonious moment. It's such a harmonious thing to say. Likewise, I feel the same, the feeling is mutual. What a nice thought. And yet, how can it be true? It's not that it's ironic, but also, how can that be the whole statement?

The title's gaining meaning for me over time. I never used to notice [the word] before. I thought it was safe. I was like, Oh, this is a dated term that no one really says anymore. But now, more and more, I hear people say it. I pick it out, and I'm certainly looking for it, and a bell rings. Oh, that's my record. And with Hop Along, every other title, no ever says Painted Shut. No one ever says Get Disowned, or Bark Your Head Off, Dog. I never have to worry. They're very separated but Likewise is this conversational word. I didn't think about how strange that could end up feeling.