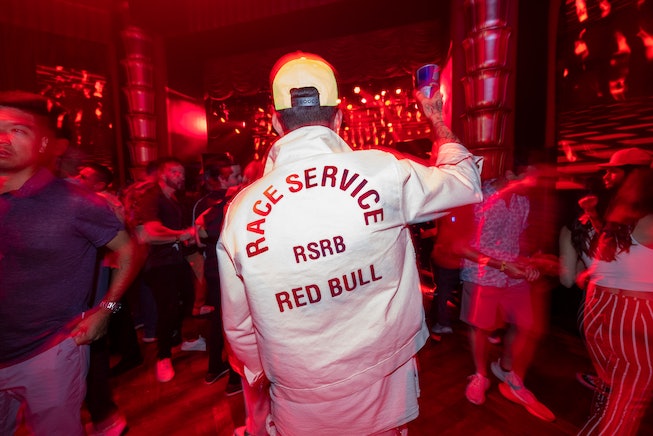 WHERE: The Faena Hotel Miami Beach

BEST DRESSED: Arca in an avant-garde knit, complete with chains.

THE VIBE: What if Art Basel and the Kentucky Derby came together for a legendary, luxury weekend in the nation’s party capital? It’s opulence. It’s exclusive. It’s art and fashion culture infused with festival energy and the buzz of an iconic sports event, all with Miami flavor.

We enter the Red Bull Guest House on the sprawling compound of the Faena Miami on Friday evening to trays of champagne and cocktails made with, of course, Red Bull; a very welcome staple of the weekend. To enter, the crowd walks past a huge RB6 Formula 1 car roped off in the lobby, as well as the Faena’s quintessential gold elephant (her glass case cracked by the end of the weekend…) to the beach for a surprise (and deeply impressive) Red Bull Air Force show. A drumline then leads our highly caffeinated party down the beach to a stunning dinner with tables designed by Orly Anan whose art installations were featured throughout the hotel. The food is fabulous. Another tequila and Tropical Red Bull and it’s time to vibe the curated night away. Tigre Sounds provided performances on both in and outdoor stages. Wandering the gorgeous grounds, we find the Living Room venue with Richie Hell to be the spot, both visually stunning in decor and people watching.

While, generally, I’d politely decline a Saturday morning yoga class, this one is beachside and presented by Miami institution Club Space. Tiffany April Levy (Tifftopia) and Space’s Lucaz melt our hangovers and prepare us for the qualifying day of GP weekend. While many board the shuttle for the track, the poolside screen is a far from meager alternative. Kaytranada, Serena Williams, and tiny celebrity Alexis Olympia Ohanion all opt to spend the 90 degree day watching from the water. With the race finished, The Faena transforms for night two of parties. I catch DJ Eli Escobar, New York legend and a personal favorite, in the lobby as he arrives for his set. He’s no stranger to playing in Miami and is excited to see the vibe of the venue, of the crowd and to learn what Formula 1 is. The highlights? His set, followed by the absolute power of Arca in The Theater. She plays a mix of El Tiburón to light things up before a surprise back to back set from DJ Tennis and LCD Soundsystem’s James Murphy. The ambush of the unlisted Murphy taking the stage, as well as the massive amount of consumed Red Bull, shifts the energy into high gear and keeps the party full until its 4am end.

As we gather, dehydrated, in front of The Faena Sunday morning to take the Miami International Autodrome-bound shuttle, a familiar face joins the crowd. It’s Venus Williams, looking gorgeous in a peter pan collared blue dress. Is she really about to take this bus with us? The answer is yes. She greets everyone as she makes her way on the coach bus and goes through General Admission when we arrive. Celebs! They really are just like us…

The Red Bull Guest House does everything it can to keep the Miami heat under control: fans, cold drinks, watermelon salads, and it’s much appreciated. To quote famed Spice Girl and F1 guest Geri Halliwell’s Instagram, “What a race. Hot!” Her presence dominates the actual race for everyone in the crowd (me) as she rarely makes public party appearances. Her husband is Christian Horner, Principal of Oracle Red Bull Racing, now known for Netflix’s Formula 1: Drive to Survive. Another Spice Girl husband is present, new Miami resident and local party boy David Beckham is with his son Romeo, as well as Michael Jordan, Dwayne Wade, Gabrielle Union and, randomly, Matt Damon. (Victoria Beckham’s attendance would have sent fans over the edge.)

The energy is fueled by the sounds and vibrations of the track. I have to admit, it is thrilling! Things escalate further as Red Bull’s Max Verstappen wins and the Guest House goes wild. Maluma takes the stage and it seems that everything is right in Miami as we head back to The Faena. The vibe has been dialed up with the Red Bull win and the Guest House is buzzing in anticipation for tonight’s parties — and rightfully so. By midnight, the space is at capacity and security has tightened. Channel Tres takes the stage debuting a new song, “Six AM,” and choreo that drives everyone crazy. Soul Clap follows in The Theater while Horse Meat Disco, as always, delivers a foolproof great time in The Living Room, all curated by Insomniac and Club Space. A crowd outside remains optimistic, still trying to get in as the weekend ends around 3 AM, proving, without a doubt, that Red Bull knows how to throw a party.