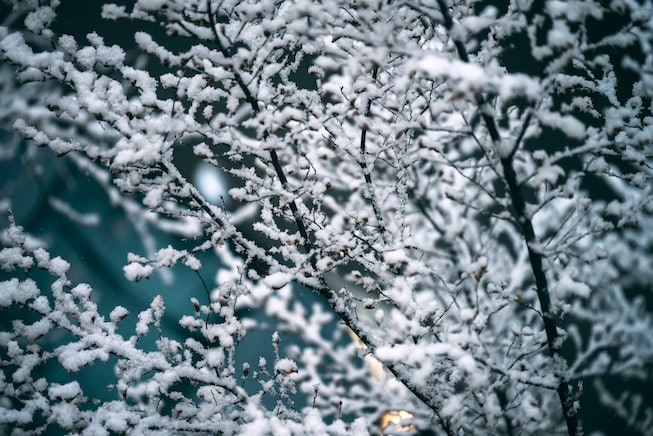 You might have noticed its suddenly dark all the time. Happy lamps are working overtime, Vitamin D bottles are flying off the shelves. It’s a time of rest and hibernation, but it’s also a time of new beginnings. The winter solstice will soon be upon us, marking a time of solace as we enter into the restful, recharging season of winter. The cosmic shift is one that has been celebrated for thousands of years; Iranians all over the globe stay up through the night with their loved ones for the ancient Zoroastrian holiday, Shabeh Yalda, snacking on red fruits to represent vitality and the looming sunrise.

This year’s winter solstice takes place on Wednesday, December 21 in the northern hemisphere, marking the shortest day and longest night of the year, when the sun will set around 4:47pm EST. While that is criminally early, it does mean the sun will start setting a little later each day, even if by mere seconds — which means that though it’s marked by darkness, the winter solstice is really about light.

Read on to learn more about the magic of the Winter 2022 Solstice.

What does the solstice mean?

You’ll have to dust off some Latin to understand the etymology of “solstice,” which comes from the Latin words sol (Sun) and sistere (to stand still). During the solstice, the angle between the Sun’s rays and the plane of the Earth’s equator appears to stand still, according to the Farmers Almanac.

What does this mean? Daylight hours have been getting slightly shorter since the Summer Solstice in June, which marks the longest day of the year. December 21 marks the start of when days will begin to grow longer.

Do the length of days ever change?

What does the solstice mean astrologically?

“In astrology, the winter solstice marks a time of rest and reflection, as the longest night of the year causes us to look inward and face our shadow selves,” astrologer Lauren Ash told Astrology.com. “This annual event happens around the same time every year—but depending on what’s happening with the planets, the energy and influence can be very different from year to year.”

Is there anything special about the winter solstice this year?

Astrologically, yes. The winter solstice always occurs at the start of Capricorn season, which normally a good time to focus on career and ambition. This year, Mercury and Venue will already be in Capricorn ahead of this transit. Moreover, Mercury will station retrograde on December 29 — making it a less than ideal time to move forward with goals, but instead a time to take a step back and reevaluate, Ash says.

“Give yourself the grace to move slowly, embrace the unknown, and move where the Universe guides you,” she says.

NEXT UP
Astrology
January 2023’s New Moon In Aquarius Is All About The Big Picture
Astrology
How to Use Astrology to Access Past Lives
Astrology
Your February 2023 Horoscope Is A Breath Of Fresh Air
Astrology
Get To Know Aquarius, The Certified Freak Of The Zodiac
Style + Culture, delivered straight to your inbox.