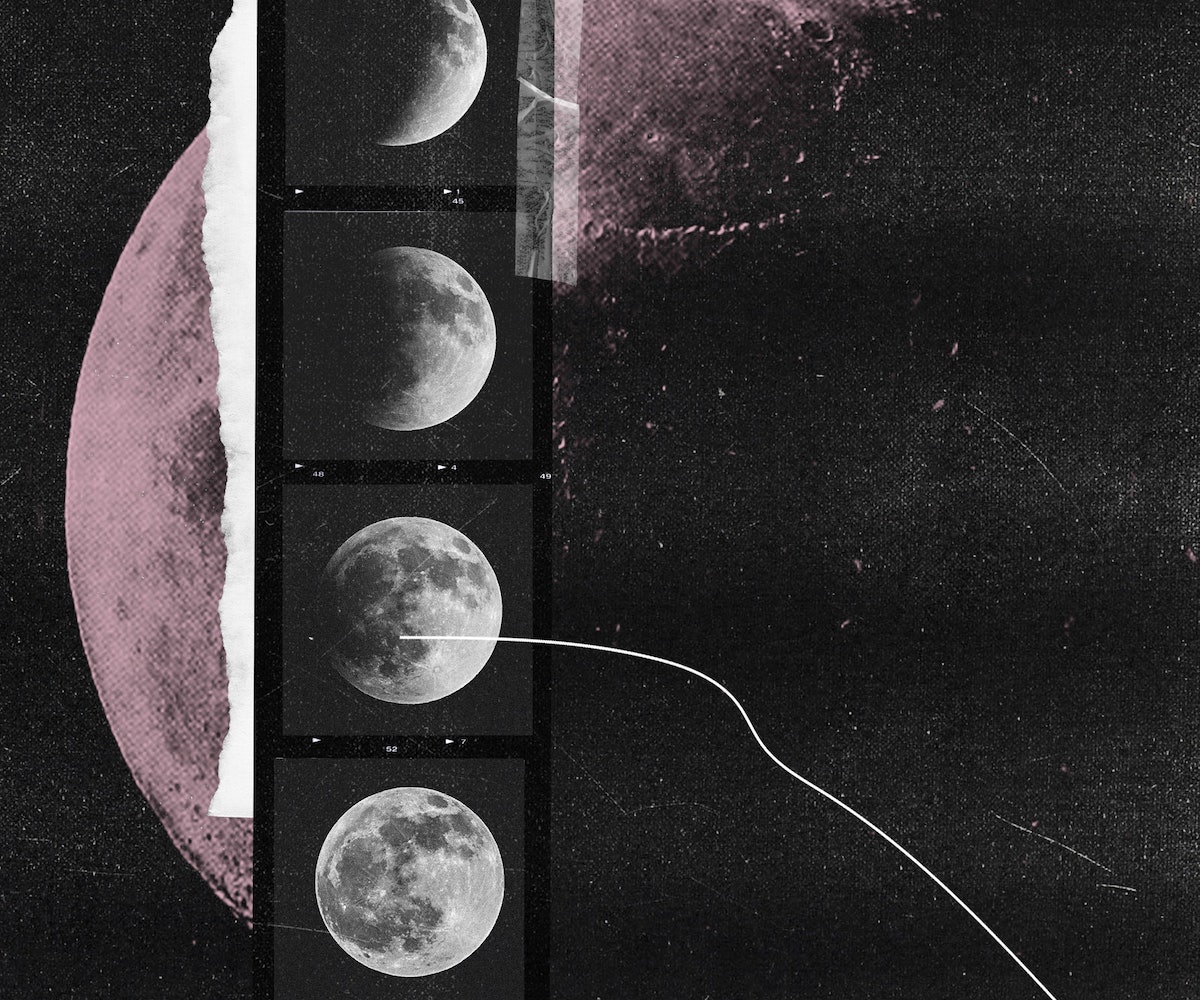 All hail Sagittarius, the sign of ostentatious, foolhardy leaps into the unknown! Timed perfectly to the centaur’s season is the FIFA World Cup in Qatar, a financial, ethical, and human rights funhouse carnival that’s too big to fail, no matter how many billions of dollars or infinite hours of unpaid migrant labor it gobbles up. But who said this was a sign for subtlety?

For the season of launching forward into the future, something’s lurching back. Johnny Depp posed for Rihanna’s Savage by Fenty show; the former president is back on Twitter; Chris Brown won an AMA. The culprit behind these comebacks could be none other than Mars, the grand orchestrator of villain edits. Retrograding in Gemini from late October through January, Mars reveals all the ways in which we’re not as evolved as we think we are. On a personal and collective level, this retrograde identifies — in glaringly obvious terms — our most humiliating blind spots. Hopefully the Gemini full moon, on December 7, can help you confront the limitations on your way to grandeur.

As the sun, Mercury, and Venus complete their tour of Sagittarius, they’ll enter open combat with Mars, and clash with Jupiter and Neptune in Pisces. Anyone with intense mutability in their charts (Gemini, Virgo, Sagittarius, and Pisces) should brace for an internal blowout before the holidays. At stake are the core tenets of each sign: the desire to go forward (Sagittarius), while reckoning with your personal history (Pisces) and your current circumstances (Gemini). The work is on daily structure, sobriety and peace, so that you don’t get yanked away with the tides of the big picture. Take the Capricorn new moon, on December 23, to nail some stakes in the sand.

The final days of the year embolden our optimism, with Jupiter hitting Aries on December 20, initiating a twelve-year cycle of creative possibility. Capricorn season hits the next day, helping us visualize our place in the new world order. Cardinal signs — Aries, Cancer, Libra, and Capricorn — should ready for takeoff. Meanwhile, the fixed sign girlies — Taurus, Leo, Scorpio, and Aquarius — deserve to chill on the beach, like Jada Pinkett Smith at the end of Set It Off, drinking Mai Tais and celebrating their survival through one hell of an eclipse season. We’d say the nightmare is over, but there’s still another round of Taurus-Scorpio eclipses coming next May. This isn’t a horror movie, honey, but a franchise!

Speaking of endless nightmares, December 29 delivers the fourth Mercury retrograde of the year, this time in Capricorn. 2022’s hybrid retrogrades began in air signs and moved into earth signs, helping us reacclimate and resocialize after a global reboot. This edition launches a pure earth cycle of retrogrades going through 2023. Jupiter is in Aries, the world is still turning, and we’re no longer hiding out in our parent’s basements. Use this retrograde to get in shape, take initiative and lay down roots. The future’s back on. Figure it out!

When most people make new year’s resolutions, it’s usually hollow talk and idle planning. Not for you. Within days of December, the planets will start to light up Capricorn, in your tenth house of career and high achievements, leading to a new moon in Capricorn on December 23. Jupiter hits Aries on the 20th, and the asteroid Chiron goes direct in Aries on the 23rd. This is a big moment, to plan ahead and lead with your heart. You may feel too jaded for new beginnings, but if you’re ready to seal the coffin on 2022 and believe that anything’s possible, the gods will have your back. Why not risk a little optimism?

Scorpio season — and its ensuing eclipses — set off the atomic arsenal, leveling life as you once knew it. But in the ionized air, you can now begin pickup up the pieces. December offers you the time and perspective to consider what you want to build. Capricorn season looks out from your ninth house of expanding horizons. All year, you’ve been forced to submit and surrender your future. Now that the old path is obsolete, what voyage do you want to chart anew? Take the new moon in Capricorn on the 23rd to think about where you want to go (and how you want to get paid to go there).

With Mars retrograding in your home sign, you’re considering yourself as a power player, and not just a dazed participant. As Sagittarius and Pisces open the gates of your relationship and career arenas, respectively, you’re invited to activate, initiate, and embody. The rewards will be vast, but, more interestingly, the ensuing conflicts will be revealing. Pay attention to what’s emerging: authentic new expressions of your needs, or old defense mechanisms that hold you back. You’re finally the protagonist. Establish safeguards so that you don’t become the villain.

December’s Gemini-Sagittarius battle royale fires off between your twelfth house of mental health (Gemini) and your sixth of physical limits (Sagittarius). Pay attention to what’s setting you off and how the symptoms manifest. Before Jupiter hits Aries on December 20 and launches you into a thrilling, propulsive new year of career and relationship expansion, you need to get clear on your boundaries. How much do you have to offer? Where do you need support? When are you going too far? That you have everything to give is undeniable; that you shouldn’t burn out while doing so is essential. Get it together in the winter, so that you can still be on top come summertime.

With much of 2022’s internal metamorphosis fully cooked, it’s time to negotiate how we’re going to deliver the new you to the world. As the planets move through Sagittarius, they inspire your fifth house of creative expression: where you generate your artistic imagination. This month, the planets in your fifth house will oppose Mars in Gemini, in your eleventh house of audience, and the intended destination of your creative efforts. Consider the ethos behind what you’re doing, who you want to share it with, and where you feel your work will be understood. Now is the time to take risks and fire away — and not preemptively cancel yourself, for once — all while putting your expression in a larger context. The world deserves to discover you. Help the right people find you.

Sagittarius sets a fire at the base of your chart, connecting you to the root inspirations which launch you forward. Across the way, at the peak of your chart, the Gemini new moon on Decemeber 7 lights up the possibilities for your capital “C” career. Of course, the presence of Mars in Gemini, in your tenth house of achievement, indicates whom you believe to be gatekeeping, refusing you opportunities, or standing in your way. Before Capricorn season helps you hone your creative focus, you need to clear out any relational projections which are blocking your natural self-propulsion. Close out these conflicts — be they real or imagined — and the new year is yours to take.

On December 18, the asteroid Ceres sets up her treehouse in Libra, where she’ll reign through March. Ceres, known also as Demeter, is the goddess of the harvest, seasons and balance. She’s the original tough mother, the supreme generator of life. With big momma in your home sign, and Capricorn season feeding your fourth house of home and roots, you’re called to focus on fortification. Make yourself the source, the wellspring, the Elven empress of the Woodland Realms. 2023 promises new adventures and opportunities, all of which should come to you. No more hunting, seeking, and begging. You’re the main event now.

November’s Scorpio season was one you’ll never forget, a revelatory inferno which burned away your old life once and for all. But out of the ashes, Sagittarius season rises, in your second house of self worth, renewing your optimism and excitement. As the planets move through Sagittarius, they spark friction with Jupiter and Neptune in Pisces, in your fifth house of creative expression; and Mars in Gemini, in your eighth house of sexuality. Now’s the time to experiment with your style, your romantic life, and your artistry. Don’t punish yourself for trying on new personas or kinks. Have fun. Go through phases and see what sticks. You were reborn five minutes ago. Don’t act like you know anything.

This Sagittarius season celebrates all the ways you’ve learned to ground, root, and support yourself, with the Christmas lights coming on in Pisces, in your fourth house of home and family. Anything feels possible, and you have the spiritual tools to cruise the astral realms and come back safely. But the solo work is done; to expand further, you’ll have to embrace teamwork. The Mars retrograde in Gemini, in your seventh house of others, reveals your interrelational shortcomings: those places where you’re afraid to ask for help or admit vulnerability. Take the new moon in Gemini, on December 7, to confront any relationship baggage that weighs down your rebooted optimism. Now’s the time for amnesties and coalition building, before an even bigger creative era begins.

Before the glorious launch of Capricorn season (December 21) and the resplendent Capricorn new moon (December 23), some accounting is in order. December’s showdown between mutable signs ignites your twelfth house of buried dreams (Sagittarius); third house of daily life (Pisces) and sixth house of work (Gemini). You’re about to fire off into a brand new beginning in 2023, casting off nearly fifteen years of old history. Now’s the time to get clear about what’s holding you back, which dreams you still fear meeting, and the blocks to make them a daily reality. The Mercury retrograde, starting on the 29th, will give you plenty of time to rework the old mechanics. Commit to getting out of your own way, and anything is possible for you.

You’re in that briefest pause before turnings, between the awakening of Scorpio season and the underworld descent of Capricorn. But while Sagittarius is hot in your eleventh house of good fortune, you might as well have a good time. Pick up momentum through contact: Take inspiration, recommendations, ideas, and substances from the people who stimulate you along the way. Treat the lead-up to the holidays as an incubator of new experiences, all meant to feed your developing consciousness. By the time Aquarius season rolls around, you’ll be the star of a new galactic order. Now’s the time to flush out your constellation of influences.

This month’s mutable sign triple-header blows up some of the core angles of your chart: the first house of self (Pisces); fourth of home (Gemini); and tenth of career (Sagittarius). What you must tend to, actively and consciously, is Mars, retrograding in Gemini in your fourth house of psychological rootedness. What’s inspiring you? What’s pissing you off? What sparks your ignition? The Piscean and Sagittarian rushes bring opportunity, excitement and advancement after a peripatetic summer. While all doors blast open, you’re still discovering what it is you want to do, so that you can choose your path forward. Take your time and see what calls you. It may not be what you expected.

NEXT UP
Astrology
Your February 2023 Horoscope Is A Breath Of Fresh Air
Astrology
February 2023’s Full Snow Moon in Leo Embraces The Real You
Astrology
How to Use Astrology to Access Past Lives
Culture
For The Girls Of Forever Magazine, What's Forever Is Friendship
Style + Culture, delivered straight to your inbox.