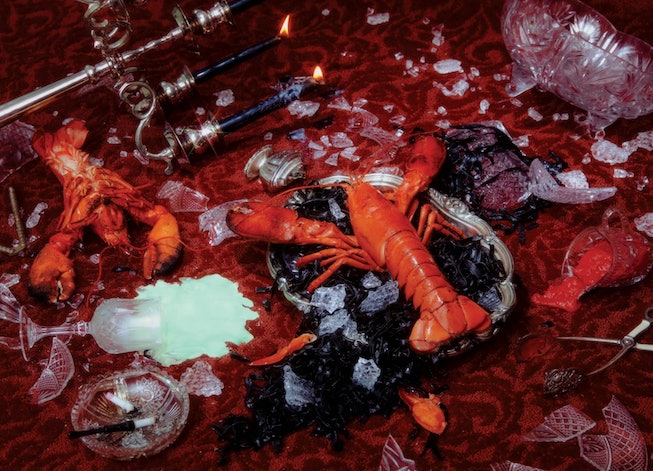 There’s something horrific about the high-pitched whistle a lobster makes when you place it in a pot of boiling water. Boiling something alive may be grotesque, but delicacy and horror often go hand in hand, something the film studio A24 gets. The studio’s publishing arm is releasing its first cookbook Horror Caviar, a horror-inspired cookbook with creepy recipes and essays on the influence of food on the genre of horror by chefs, writers, and food influencers.

Recipes include Lamb Chops in Marigold Jelly, inspired by Midsommar, fish stew inspired by The Witch, and Bone & Pork Dumplings with Black Angel Hair Pasta inspired by Audition. Carmen Maria Machado, patron saint of modern morbid, has an essay titled “Horror and the Refrigerator: Nine Theses,” and there’s an essay on the Black vampire film by Yasmina Price, of the Departments of African American Studies and Film & Media Studies at Yale. The book is chock full of creepy full-bleed photo spreads that are like the macabre mood board out of a nightmare, something that only A24 could concoct. It’s available for $65 from A24’s online shop now.

More of our favorites from the book include “Snap Pea Gelatin Labyrinth” inspired by The Shining (which is just as much of a winter movie as it is a Halloween movie), or my personal favorite: “Aspic Tower Studded with Insect Candy,” inspired by Suspiria. And of course, there are drink recipes, like the “Warm Vegan Horchata, Amaro and Instant Coffee,” inspired by Alien.

Horror Caviar is is the latest release from A24’s publishing arm, which last month, released a coffee table book For Promotional Use Only: A Catalogue of Hollywood Movie Swag and Promo Merch from 1975-2005, which presents 165 marketing artifacts that show just how far studios go to promote movies — from a fisherman’s hat emblazoned with the logo for The Notebook to Being John Malkovich Russian nesting dolls to Jaws beach bags. They’re also interspersed with essays on the history of movie merch, including an interview with Steve Ellman, who was behind the Jaws beach bag, and an essay from culture critic Lindsay Zoladz.

Expanding their coffee table book empire (especially so close to Christmas...we’re onto you!) is a smart call for the studio, which has a cult following so invested in its aesthetics that we’ll gobble up anything tangible they can sell us.