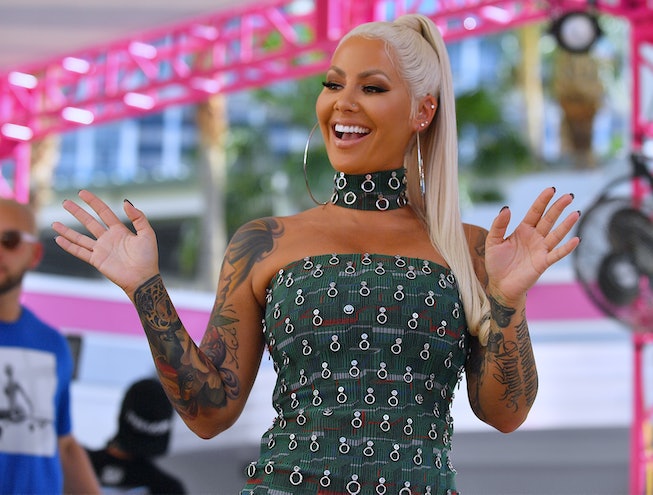 When it comes to the celebrity feuds of yesteryear, few were more complicated than that between Amber Rose and the Kardashian family. Rose famously dated Kanye West, now known as Ye, before he married Kim Kardashian; Rose is also best friends with Blac Chyna, Rob Kardashian’s ex and the mother of his daughter. To entangle matters even further, Blac Chyna and Kylie Jenner also share an ex in Tyga.

Fighting words were thrown around within this torrid group back in the day — specifically circa February 2015. During an interview with Power 105.1's The Breakfast Club, Ye said that he had to take “30 showers” in between ending things with Rose and dating Kim. ("It's very hard for a woman to want to be with someone that's with Amber Rose," said Ye.) Rose fought back in a now infamous tweet in which she called the family the “Kartrashians” and prophesied that they would “humiliate” Ye whenever they were done with him. But now, approximately seven years and one ongoing divorce later, Rose is sharing her regrets regarding her comments.

“I started my Slutwalk and helped Millions of women around the world stand up for themselves against Slut shaming so something amazing came out of it,” said Rose on Instagram. “Kim nor her sisters deserved that tweet and y’all shouldn’t co-sign that either. Sh*t was old and immature [as f*ck] of me to involve the KarDASHians in the mess [Ye] made.”

Per People, Rose also added in her January 16 Instagram Stories that she "never got an apology for" Ye’s “30 showers” comment. And although she seems to blame Ye for the feud kicking off in the first place, she notes that as she’s moving forward, she’s hoping to learn from her mistakes. “I just want to spread love and positivity,” she wrote.

It’s an extension of Rose’s armistice from 2016. "I don't necessarily like [Kim]'s husband; she knows that," Rose said at the time. "Me and her aren't best friends — I don't think we ever will be — but I like her. I think she's a nice girl. I just think as women it's good for us to just let things go, and I feel like we did."

NEXT UP
Life
An Exhaustive Breakdown of Ezra Miller’s Run-Ins With The Law
Life
What’s Going On With Record Labels and “Viral” TikTok Moments?
Life
Anna Delvey’s NYC Art Show Was Pure Chaos — And I Loved It
Life
Rosé Says She Doesn't Think BLACKPINK Will "Ever End"