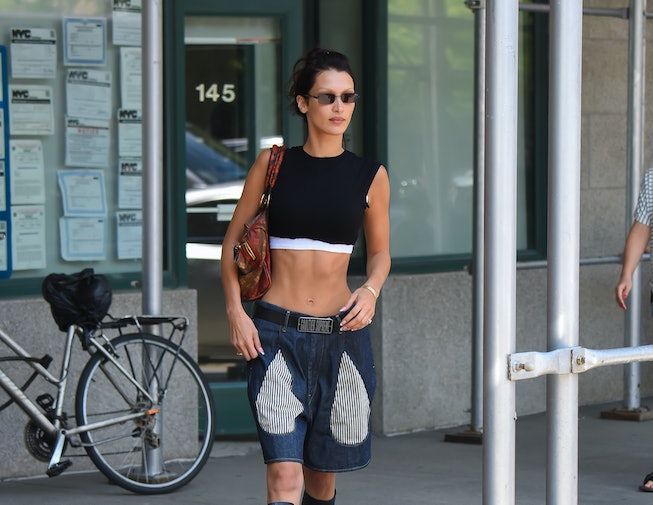 Like any great supermodel, Bella Hadid will soon make her acting debut — not with a sexy cameo in a blockbuster, but in the “unhinged role” of the “weirdo girlfriend” in Ramy, Hulu’s dark comedy about a first-generation Egyptian-American Ramy Hassan (played by Ramy Youssef) and his family as they navigate spirituality and coming of age in New Jersey. Hadid will have a recurring role on the series, and in a new profile for GQ, unlikely besties Hadid and Youssef talk religion and Hadid’s greater calling.

Hadid, who was born in Washington D.C. to a Palestinian father before moving to Santa Barbara, has long desired to reconnect with her Muslim culture.

“I would have loved to grow up and be with my dad every day and studying and really being able to practice, just in general being able to live in a Muslim culture,” she tells GQ. “But I wasn’t given that.”

Hadid is famously supportive of the Palestinian people and proud of her heritage. She has marched in support of the "Free Palestine" movement and has regularly posted her feelings about Palestinian liberation to Instagram, even when the Israeli government, via Twitter, has lambasted her for doing so.

According to GQ, on her first day on the Ramy set, the crew left a “Free Palestine” T-shirt in her trailer, which she says brought her to tears. “I couldn’t handle my emotions,” Hadid says. “Growing up and being Arab, it was the first time that I’d ever been with like-minded people. I was able to see myself.”

Hadid and Youssef also prayed together during Ramadan, a moment that was transformative for Hadid.

“There was one time where Ramy came over during Ramadan and allowed me to pray with him,” Hadid recalls. “And it was one of the most beautiful moments of my adult life.”

“Bella’s telling you she feels this deep connection when she’s in a mosque or when she’s praying, but there’s also this hesitation to say ‘Muslim’ because of this specificity of what that can look like,” Youssef adds. “The pressure to perfectly represent an idealized version of Muslimhood is something that can hinder our community and keep us in a box.”

Hadid says joining the cast of Ramy has helped deepen her spirituality and find her calling — one that extends beyond the runway, ad campaigns, and glossy pages of Vogue.

“I realized that I’m not on this earth to be a model,” she says. “I’m so lucky and blessed that I’m in a position where I can speak out the way that I do. And really, the downfall is what? That I lose my job?”

NEXT UP
Culture
Phoebe Dynevor Will Not Return for Bridgerton Season 3
Culture
The Cutest Couples At The 2023 Grammys
Fashion
Jenna Ortega Is The Face Of Adidas’ Newest Line
Culture
Caroline Polachek In KNWLS & More Party Photos You Missed
Style + Culture, delivered straight to your inbox.