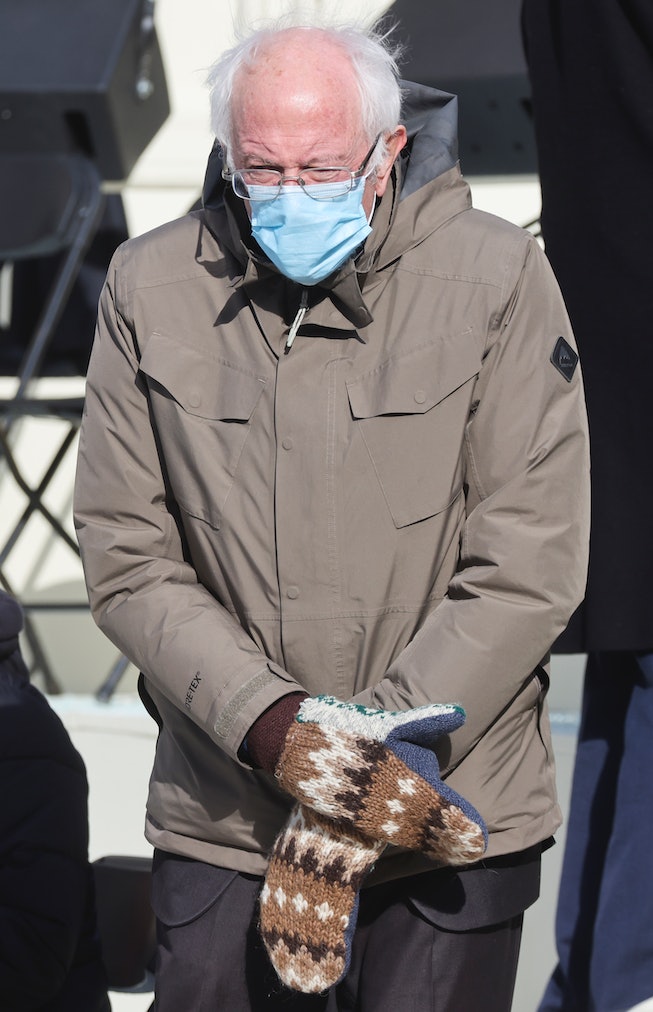 The one highlight of the presidential inauguration that's persisted in the collective cultural consciousness is not about the man that was sworn into office, but Senator Bernie Sanders. On that cold and historic day, the Vermont politician did nothing more than keep to himself and try to stay warm in tried-and-true winter staples, but that was enough to catapult his images into yet another stratospheric meme cycle. As politician and activist Marianne Williamson so astutely noted: "All the Bernie memes [on inauguration day] are a spontaneous eruption of America’s collective unconscious. We know who we love and we just weren’t gonna let the day go by without saying so."

The popularity of Sanders wearing his recycled wool mittens instantly became charitable. The senator put out "Chairman Sanders" merchandise, including T-shirts, sweatshirts and stickers; everything sold out in 30 min, and over the course of five days he raised $1.8 million for Vermont-based charities.

The momentum is still strong. Now, those who still feel the Bern deep in their hearts can cop a pair of Sanders' inauguration mittens for themselves. The handmade, repurposed wool mittens are made by Jane Ellis, the Vermont schoolteacher who knitted the now-famous winter accessory for Sanders. The replica pair are being auctioned off to the highest bidder, with all proceeds going toward the LGBTQ+ charity, Outright Vermont.

The bid is presently at $7,000 over at the Charity Auctions Today site. For those without that kind of dough, it appears meme-inspired socks may also be in our future. And who knows, maybe Sanders' other meme couture — the sensible Burton Winter Coat — will be the next piece to get the auction treatment.

NEXT UP
Life
A Breakdown of Ezra Miller’s Run-ins With the Law
Life
What Is DALL·E? The AI Machine Creating Instant Surrealist Art
Life
Facebook Is Desperate To Be More Like TikTok
Beauty
TikTok’s New Beauty Trend Is Skin Care With A Side Of Existentialism