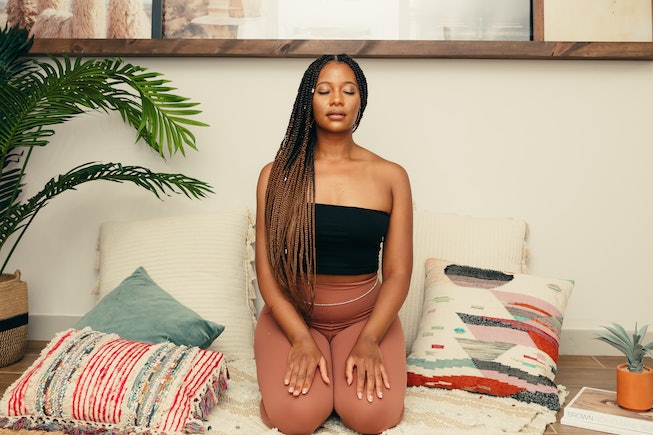 I heard about breathwork years before I got around to trying it, thanks to a generationally inherited idea that I should be able to tend to my mental health on my own, and an overwhelmingly white presence in most healing spaces. Such is the case for many Black folks who, like me, didn’t feel comfortable exploring regenerative, mindful-based practices until finding ones made for and by Black folks, specifically.

This same line of thinking led to the founding of Black Girls Breathing, an inclusive wellness platform offering meditational breathwork classes for Black womxn. Since 2018, Atlanta-based breathwork practitioner Jasmine Marie has focused her energy on bringing the practice to as many people as possible, leading monthly sessions — both virtually and in person — on tour through cities all across the country, from Houston and Dallas to Boston and Los Angeles.

If you’re unfamiliar with the practice, it’s a fairly simple (albeit initially awkward) active meditation using a three-part breathing pattern that studies show can aid in calming a wandering mind, relieving symptoms of anxiety, and shifting through unresolved trauma and blocking energies. In a world where chronic stress and trauma disproportionately affect Black folks, almost as if passed down by legacy, breathwork should be a more common practice amongst these communities, but it’s not.

“When I think about how microaggressions, macro aggressions and systemic racism impact Black womxn's mental health, I think about a regular breathwork class, and how none of these specific issues are being addressed,” Marie tells NYLON. “If a Black womxn wanted to address these particular issues and how they are impacting her mental, emotional, and spiritual health on a daily [basis], she'd need to book an individual session, which can run [from] $150 to $300 each. That's largely inaccessible, especially in our community.”

Addressing the financial inaccessibility that routinely keeps Black people out of wellness spaces has always been at top of mind for Marie. Typically, sessions are priced at $25 to join, but in response to the on-going global pandemic, set behind a revitalized fight against systemic racism, Black Girls Breathing implemented a bi-monthly, sliding scale virtual breathwork series called Finding Calm. Folks were initially able to choose donation options between $5 and $25. As the pandemic — which has disproportionately impacted Black and Brown communities — has carried on, a $0 donation amount is now available for those especially strained financially.

What’s more, Marie began to see an uptick in allies looking to support the platform, leading to a substantial number of free spots made available for each session (upwards of 75 out of the 250 session capacity) thanks to the growing contributions. Since, Black Girls Breathing has organized a mission to raise $50k in order to make virtual breathwork for Black womxn free for one whole year. The crowdfunding campaign, running through August 10, has raised nearly $28,000 so far from over 300 funders.

According to a survey the platform conducted amongst Black womxn who have attended Black Girls Breathing sessions, participants admitted to being more comfortable in spaces specifically made for them versus made for the general public and for other womxn of color.

“Thankfully, it's become hard to ignore the effect that living in a society that oppresses Black people has on your mental and emotional health,” says Marie. “A lot more people are now just waking up to how systemic and overt racism has impacted them, but are also actively seeking out ways to help manage their mental health. It's becoming less of a stigma, in my opinion, for those in our community to seek the mental help they need.”

Marie recalls her first experience with breathwork as being transformative, remembering, “It was during a time in my life where I was severely stressed and not completely in my body.” As someone who has integrated the practice into my weekly self-care routine, I can attest to, while maybe not obvious, just how cathartic and life-changing it is to just breathe — and to do so with intention. Still, it can be an intimidating process if you’re not used to sitting with your thoughts, and letting your emotions take control.

“With starting any new practice or tool, my advice is to come in open-hearted and with an open mind,” Marie advises first timers. “Perfect isn't the goal, developing a practice that feels good to you is. Your body has such an innate wisdom built in. It knows how to shed trauma and shift stagnant energy once you give it the proper attention and tools needed to help it do just that. Be kind and gentle with yourself.”