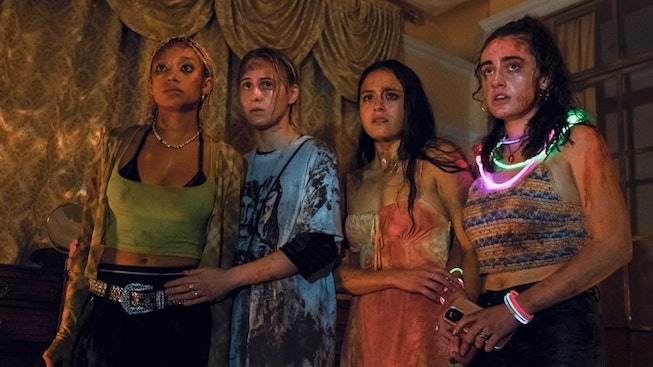 There’s nothing like a midsummer night’s bloodfest to get the heart racing, and now A24’s Bodies Bodies Bodies is the latest to join the storied tradition of summer horror comedy releases.

Bodies Bodies Bodies takes us into the world of wealthy and depraved twentysomethings who are hunkered down in a remote family mansion as they wait out a hurricane. Their stab (sorry) at a murder-in-the-dark party game backfires when an actual murder is revealed, and along with some provberial backstabbing and fractured friendships, the stay becomes a fight to survive the night.

The Halina Reijn-directed film premiered at SXSW in March and lands in theaters on August 5. Until then, find out everything you need to know about it, below.

The cast is stacked

Bodies Bodies Bodies already seems like a good time at the movie on premise alone, and it only gets better with its fresh cast of comedic geniuses. Leading the charge is Rachel Sennott, the breakout star from Emma Seligman’s delightfully cringe comedy directorial debut, Shiva Baby, along with Chase Sui Wonders, Amandla Stenberg, Maria Bakalova, Myha’la Herrold, and Conner O'Malley. Rounding out the cast are Pete Davidson and Lee Pace, who play an extremely wealthy childhood friend and a dull-witted older boyfriend, respectively.

Among Us, but make it Gen Z

With obvious comparisons to Among Us, the 2018 online multiplayer that’s like a URL version of the party game Mafia, Bodies Bodies Bodies adds a contemporary spin thanks to Kristen Roupenian, Sarah DeLappe, and Chloe Okuno’s script; Sennott’s Alice is a podcaster, Davidson plays an extension of his f*ckable online persona, and Pace comes into the picture via Tinder. You get the picture.

Get ready for a skin-crawling score

If a horror movie is only as good as its score, Bodies Bodies Bodies is bringing its A-game with dynamic new EDM work from composer Disasterpeace. The composer is best known for his work on It Follows, the 2015 horror film following a college student who is stalked by supernatural entity after a night of casual f*cking and sucking.

The trailer is not a safe space

The Bodies Bodies Bodies trailer may start out all fun and games — dancing, sabering a bottle of champagne, singing a cringey campfire song — but it’s not long before the characters are wrecked, screaming at each other, and begging for the sweet release of Xanax to the tune of a new Charli XCX song, “Hot Girls.” (What else?) And to top it off, the film’s Gen Z satire comes out strong, the highlight being a bloodied Sennott screaming “You’re silencing me!” upon being told to relax. Movies are fun again!

This article was originally published on April 4, 2022