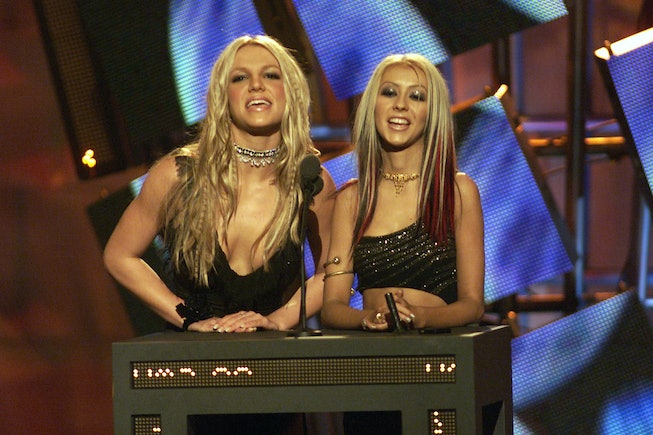 Britney Spears has been freed from the 13-year conservatorship that controlled almost every aspect of her life since 2008. And while she’s celebrating, and recently teased an Oprah interview (fingers crossed!), she’s also been criticizing those who she feels haven’t had her back. This week? Old Mikey Mouse Club pal Christina Aguilera.

When a reporter asked Aguilera at the Latin Grammy Awards on November 18 if she’d had any communication with Spears, she responded, “I can’t,” while her handler stepped in to nix the question, saying “I’m sorry, we’re not doing that tonight,” as he pulled her away. Aguilera added: “But I’m happy for her!”

Spears posted the clip on her Instagram story with the caption, “I love and adore everyone who supported me… but refusing to speak when you know the truth, is equivalent to a lie!!!!” She continued: “13 years being in a corrupt abusive system yet why is it such a hard topic for people to talk about???” she continued. “I’m the one who went through it!!!! All the supporters who spoke up and supported me thank you… Yes I do matter!!!!!”

We can probably blame overzealous PR reps for this snafu, because Aguilera has been publicly supportive of Spears in the past. This summer, she posted a thread on Twitter, where she wrote: “It is unacceptable that any woman, or human, wanting to be in control of their own destiny might not be allowed to live life as they wish … My heart goes out to Britney. She deserves all the TRUE love and support in the world.”

Still, what Spears probably needs most right now is legitimacy, and pop stars seeing questions about you as a liability certainly undermines her. But then again, if there’s anyone who knows how optics-based the dirty business of show business is, it’s Britney (b*tch). That being said, there’s one star who, according to everyone, is doing everything right. In the same series of Instagram stories, Spears praised Lady Gaga for criticizing the industry’s treatment of Spears in a red carpet interview for House of Gucci.

“I think that she will forever be an inspiration to women,” she said of Spears. On Instagram, Spears wrote: “Thank you @LadyGaga for genuinely taking your time to say something so kind. You made me cry!!! Love you!!!”