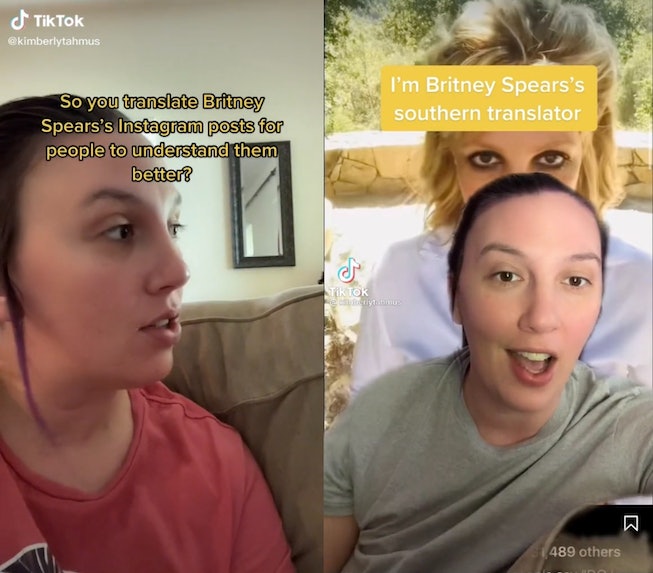 Now that Britney Spears is freed from the bounds of her 13-year conservatorship, she’s wasted no time in embracing a maximalist approach to Instagram. But her sheer number of posts and the Notes-app apology length of many of her captions have some fans scratching their heads. What does Spears mean when she writes things like: “This double ray of sunshine might just light up your world with a subtitle called apples?’” For some people, it’s given them fuel to pathologize the star, continuously taking any opportunity to comment on her mental health. (Something nobody except her own trained professional is qualified to comment on, by the way!)

Kimberly Thomas, a homemaker, writer, and TikTok creator originally from Rockford, Alabama, sees Spears’ captions not as the manic ramblings some are quick to diagnose her with – but as ramblings more akin to the vernacular of a Southern mom on Facebook. Thomas is Spears’ Southern translator, who boldly and bravely translates the pop star’s isms, emojis, and Instagram rants for her half a million followers into something everyone — not just people from the south — can understand.

“I don’t see it as some manic behavior. I'm not a psychologist, but I just didn’t see it that way. I just saw it as someone talking like where I’m from,” Thomas told NYLON. “I just wanted to do it because I felt like people weren’t understanding her in a way that she wanted to be understood.”

Like plays, Spears’ captions are maybe best heard, not read, and Thomas translates her captions into tangible TikTok-length monolog, and then offers cultural explanations for distinctly Southern things Britney mentions, like what “speaking in tongues,” or a “come to Jesus moment” is. “I honestly think there is a lot of stigma around the Southern accent and it has to do a lot with people thinking we’re stupid or slow,” Thomas says. “There’s a lot of misconceptions about that, but I don't think that makes it okay for people to have a misconception about people being manic or crazy.”

NYLON spoke with Thomas about how she became Spears’ Southern translator, biases against people with Southern accents, and about whether or not she thinks the pop star will ever reach out to her.

How did you get the idea to do this? When did it occur to you they should be read out loud?

It was just really super simple. I’m 35, so I grew up in a time when Britney Spears went through everything. We’re five years apart in age, so I grew up with her music and I follow her on everything. I’m not a super fan or anything; I just like her music and I was on Instagram and I was scrolling through just like I do any other day and one of her posts popped up. It was the post that I ended up reading on TikTok that ended up getting 9 million views – and I read it and thought, “Oh well, she must be really pissed at her sister.”

I went to the comment section because you know everyone goes to the comment section and the first thing I see is: “Why is everyone acting like this makes sense? You can obviously tell she’s not okay by the way she writes.” 40,000 people liked that comment. I thought, that’s crazy. I don’t see it that way. I don’t see it as some manic behavior. I'm not a psychologist, but I just didn’t see it that way. I just saw it as someone talking like where I’m from. I said it out loud to myself and I decided, “You know what? I’m gonna do a video.” It took five minutes and I posted it and it said, “video processing,” so I was like, “Oh, whatever, nobody’s gonna see it.” I wake up and it has, like, a million views. I don’t know, I guess I just wanted people to understand that’s just how we talk. Think like how a Southern Facebook mom would write their status, so think about that and how they’d say that out loud, and that’s how I read it.

Why do you think these videos resonate so much?

Because I feel like a lot of people in the media really stir around mental health a lot sometimes in a way that can hurt people. You say, “Look at her, she's crazy.” Someone has a comment like that and if it doesn’t make sense to them, they automatically go with the first assumed idea and now that I had a different idea about her, people are like, “Oh, okay that makes sense that way,” other than an assumed idea. Hearing it out loud like that makes a lot more sense.

People are so quick to call her crazy.

And desperate! When she did that to her hair in 2008, 2009, it was like, “Oh my god, she’s insane!” It is literally a TikTok trend right now to shave your head. I find that so crazy now. I never thought her shaving her head was crazy. Everyone did because the media did, but who cares? It’s really disheartening to see that. I feel like her fans and herself took so long to come up with that #FreeBritney movement and finally got it done, and then people still call her crazy.

Why do people have such a hard time understanding what she really means? Do people have a general lack of knowledge around Southern dialects or the south in general? Or a stigma?

That dialectic – she’s from Louisiana and I’m from Alabama. If you’re from the south, you just sort of understand certain dialects. My mom is from the New Orleans area and there’s a lot of different words, even if you're not from a certain place you wouldn’t understand unless you grew up around it. If I went to Brooklyn, I wouldn’t understand a lot of slang words because I’m not from there and I don’t understand the dialect.

I honestly think there is a lot of stigma around the Southern accent and it has to do a lot with people thinking we’re stupid or slow. There's a lot of misconceptions about the way Southern people talk and we’re uneducated. A lot of that has some truths inside of things, when it comes to the structure inside the south and money that goes into education. I didn’t grow up with a lot. The median income was 20,000 a year for households of four where I’m from and I’m not as educated as someone who went to a public school in New York City, but at the same time, am I stupid? No. Did I have the same opportunities as others? No. That doesn’t make me dumb or stupid or unitelligent. There’s a lot of misconceptions about that, but I don't think that makes it okay for people to have a misconception about people being manic or crazy.

Do you ever not understand what she’s saying?

There was one time where I felt like she tested me! There was one post where I was like, “Okay I am not getting this,” and I had to read it a couple times out loud. I ended up figuring it out in a way that felt like it made sense. It was something about speaking in tongues. I knew exactly what that was, but I feel like a lot of people didn’t understand. Normally it takes me just five minutes, but that one took me a good 10, 15 minutes. People said, “She’s testing your Southernness.” I was like I think so too because I had to have a whole explanation of everything at the end of the video.

Do you feel like you’re in her head at this point?

People in the comments seem to really want her to reach out to you. How do you feel about that?

I know, and I have zero expectations. It’s Britney Spears we're talking about here. I am not some famous person and I feel like she’s a pretty private person. She shares lots of things but at the end of the day, why would she message me? What would be the point in that?