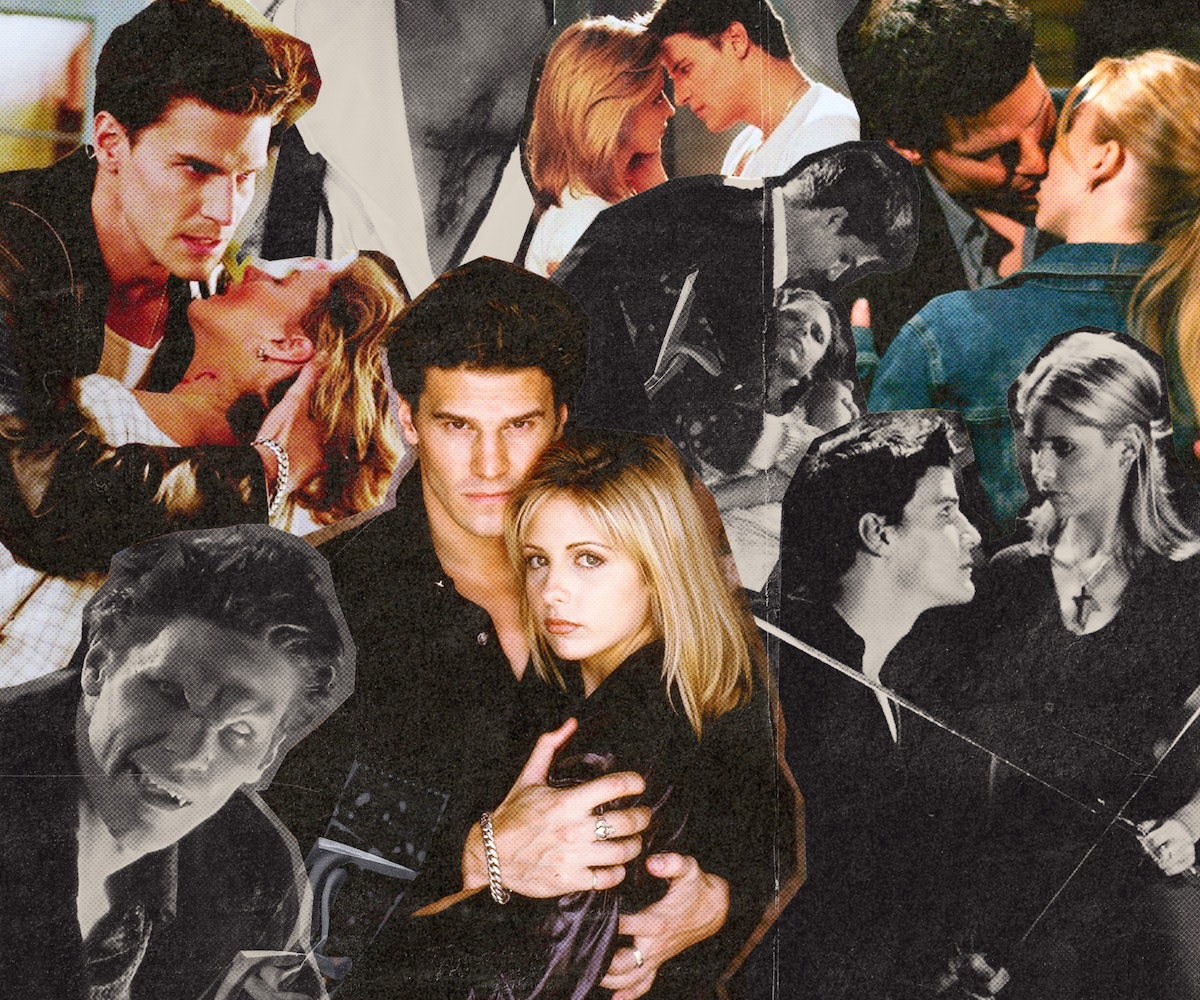 In January 1998, the WB made a vow to viewers of Buffy the Vampire Slayer, its nascent teen supernatural sensation: the nights of January 19 and 20 would change everything forever. They got that right. In the back-to-back episodes “Surprise” and “Innocence,” Buffy Summers (Sarah Michelle Gellar) lost her virginity to her gallant vampire lover Angel (David Boreanaz). The morning after, Buffy would wake up to one of the most devastating shocks in the history of television, a heartbreak which, 25 years later, still hurts like hell.

At the start of 1997, Buffy’s writers were only just perfecting their alchemical brew of postmodern self-awareness, supernatural metaphor, teen soap operatics, and gothic sensuality. Yet one dynamic crackled from the jump: the smoking hot chemistry between Buffy and Angel, “the one with the angelic face,” the vampire with a soul. David Boreanaz was a worthy heartbreaker for the superpowered messiah of the Girl Power epoch. The ‘90s was an unprecedented age of abundance for lovers of twink male aestheticism: living deities like Paul Walker, Shawn Wayans, Sean William Scott, and Freddie Prinze Jr. would have warranted their own coinage in Hadrian’s Rome. But away from the troop of glimmering sun gods, Boreanaz seduced from the shadows, imbuing Angel with an ageless allure worthy of his 240 years. Slinking through The Bronze, he’d gaze at Buffy as if she were the star of his private silent movie. He didn’t need words to devour her.

By later seasons, fans of Buffy would know the show’s score: to fall in love is to put a target on your back. But this early in Season 2, the viewers, like their teenaged heroine in love, were still blissfully innocent. “Surprise,” set on the eve of Buffy’s 17th birthday, ends with Buffy and Angel, rain-drenched and on the run from vamps, hiding out alone in his apartment. Soon they’re kissing, and then the act is done, the pair dozing in post-coital bliss and silk sheets. But something’s wrong: Angel bolts awake and runs into the night screaming.

Long before streaming made the drop of episodes a factory slop production line, shows like Buffy had to get creative. The WB brilliantly aired “Surprise” and “Innocence” on back-to-back nights, bringing in the highest-ever ratings for the series and simulating for the viewers Buffy’s own experience: the night of passion, and then the morning after, when she’d wake up to a cruel new reality.

“By later seasons, fans of Buffy would know the show’s score: to fall in love is to put a target on your back.”

Just last night, Angel had been a vampire with a conscience, cursed with a soul so that he’d grieve the lives he’d taken in his Louis & Lestat salad days. But in experiencing one moment of true happiness with his Slayer beloved, the curse was broken, and Angel’s mass-murderer alter-ego, Angelus, was restored. In moments, Boreanaz had transformed from leather-clad sad-sack to psychopathic stud. This new Angel, Buffy would soon learn, wasn’t just a killer but a velvet-wearing, eyeliner-donning Hannibal Lecter, who liked to play with his food long before the first bite. “Don’t tell me,” Buffy’s mother Joyce (Kristine Sutherland) drolls on. “He’s changed. He’s not the same guy you fell for.” Even Buffy, the most self-aware of new-millennium It Girls, had fallen for the oldest trick in history. Angelus was every romantic teen’s most lurid nightmare, a monster awakened under the bedsheets. Buffy opened her heart for the first time, and the person she woke up to would lick every drop from its pulpy remains.

Angelus would go on a gleeful killing spree, splattering the words “WAS IT GOOD FOR YOU TOO?” in blood to terrorize Buffy. He’d artfully arrange the body of Jenny Calendar (Robia LaMorte) for her lover, Buffy’s Watcher Giles (Anthony Stewart Head) to find. Buffy would have to do the impossible: grieve her lost love, and then kill him. The teen Slayer was always reckoning between her divine calling and her desires for traditional girlhood, but with this, the fantasy of a “normal” happy future was forever annihilated. The central theme of the Buffyverse was now marked in eyeliner and blood: You don’t get the life you wanted.

By the end of “Innocence,” Buffy is no longer a quippy teen mall blonde, but a hardass with a broken heart and an imperative to vanquish her lover. The episode ends with Buffy and her mother on the couch, a cupcake with a birthday candle before them. “Aren’t you going to make a wish?” her mother asks. “Just let it burn.” Damn, girl. For original viewers and late-coming bingers alike, this would be the point of no return. Buffy was no longer kitsch background noise for doing the dishes. After surviving this, you were in it to the end.

From this point forward, the show would be free to outgrow the trappings of the ‘90s, the WB, and broadcast television, exploring themes of power, morality, and self-annihilation. “Innocence” would plant the seeds of Buffy’s complicated sexuality, which could only be explored once the series jumped to the UPN for Season 6. Buffy didn’t have to be a bland, aspirational cipher anymore, and nearly all of her friends and lovers would take a turn playing supervillain.

Angel, meanwhile, was liberated. The joy with which Boreanaz commanded Angelus, instantly going from puppy dog to psychopath, made his career. You couldn’t help but delight in Angelus’ wanton savagery: He was having too much of a good time. In the decades since, male audiences have clamored for boring antiheroes, “hardcore” Jokers and endless pastiches of corrupt men who have “gone too far,” but none have actually been fun the way Angelus was. He’d crack himself up, bickering with his homoerotic rival Spike (James Marsters) and charming Drusilla (Juliet Landau). Every murder felt creative, and a little bitchy.

By the end of Season 2, Buffy would face off with her ex in mortal combat, and make the impossible choice we knew she would. But Boreanaz was too beloved to stay dead. His rapturous turn as Angelus earned him a re-ensoulment, a hasty resurrection, and a spin-off series, where he could really dig into a character with centuries of baggage. Now that we’d seen what Angelus was capable of, his repentant alter ego would forever walk the world as a living loaded gun, a pair of fangs ready to pop. Over five seasons of his eponymous, excellent series, he’d have endless opportunities to seek t’shuva while his former victims (and lovers) returned to make him suffer. The saint with a Scorpionic sadist inside would play the role of redeemer for the most exiled of Buffyverse characters, restoring and elevating characters like Cordelia, Wesley, Faith, and even the stone-cold killer who sired him, Darla.

“Surprise” and “Innocence” didn’t just rock the Buffy mythos forever; they shifted the rules of pop storytelling for the new millennium. Buffy’s writers proved that they didn’t owe their viewers — or their network — anything. Years later, Game of Thrones would earn a loyal following for killing its ostensible protagonist, Ned Stark, subverting fantasy optimism in favor of brutal “realism.” Tony Soprano, Don Draper, Walter White, and even Batman would become the heroes of a “dark” new age of moral reversals. Yawn. Buffy, Angel, Cordelia, and company had already grappled with Shakespearean tragedy, slept with serial killers and earned redemption — while wearing platform boots and cracking pop culture references.

“Surprise” and “Innocence” would indeed earn the series an Emmy award: Best Makeup. Indeed, Buffy still rarely garners the “serious” acclaim, or awards, of its peak-TV descendants. Its stars, styles and sensibility are often castigated to the nostalgia bins of the ‘90s…which means that it’s for real ones only, and not just the critics who watched a few bottle episodes. 25 years later, TV has only become more highbrow, high-budget, and hard to watch. Endless series in the algorithm age of television have referenced or refracted Buffy, to little effect. Stranger Things’ enjoyable fourth season felt like a mystery from the Hellmouth with an exponentially bigger price tag. But heartbreak, redemption, and rising from the grave can’t be replicated, not the way Sarah Michelle Gellar did it, week in and week out, with no hope for a trophy. Until TV is ready to ditch the pastiche and go for the blood, there’s no point in leaving Sunnydale.