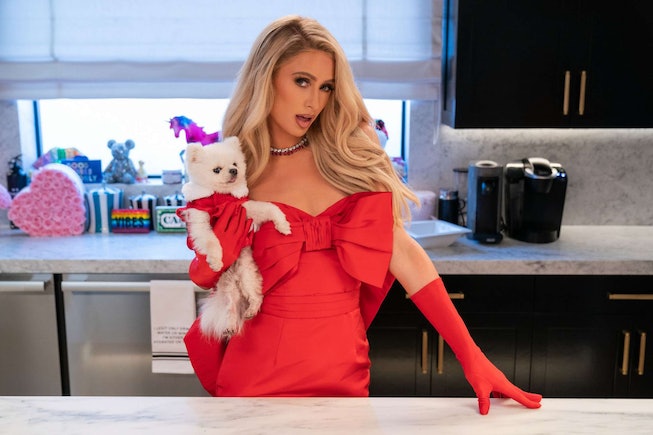 If you’re an “It” Girl, you’re a natural on camera. Those are the rules! And there’s no one who’s meant to be on camera more than Paris Hilton. Nearly 20 years after the release of her groundbreaking reality television show The Simple Life, screencaps of Hilton’s iconic lines and antics still remain one of the pillars of online humor. This type of cultural fortitude is rare, so it came as no surprise when Netflix announced that it was releasing a cooking show with Hilton at the helm, despite the fact that she’s nowhere close to a professional chef. Her joie de vivre and enviable coolness simply can’t be taught in even the best of culinary schools.

Cooking with Paris doesn’t reveal any substantial cooking knowledge, because frankly, that’s not the point. If you’re looking to up your culinary game, there’s an entire Food Network for that, and you can see yourself out! Instead, Cooking with Paris is about living, loving, and laughing as Hilton maneuvers her way around various Los Angeles grocery stores, her rainbow-lettered cookbook, and her enormous kitchen. And because it’s Hilton, you’re always laughing with her, and never at her.

Cooking with Paris is now streaming on Netflix.

Something Hilton makes abundantly clear throughout Cooking With Paris is that she’s a rebel. Sometimes that means not following cooking directions to semi-disastrous results, wearing a feathered evening gown while cooking, or her choice of cooking utensils. Since money is clearly not an issue, Hilton goes beyond buying the best cookware, and instead opts for diamond-encrusted utensils. Are they practical? Barely. But it’s so quintessentially her that it’s almost the only thing that makes sense about the show.

A Culinary Education In Action

Hilton makes her way around the kitchen with the help of an episodic special guest — as well as a team of watchful, off-camera producers who make sure she doesn’t burn down her mansion or slice off a finger. But what we’re here for isn’t the actual cooking technique or final results, it’s Hilton’s cool girl indifference. She doesn’t know what a blender is, has no idea what a whisk looks like, need Siri’s help to figure out what lemon zest means, and most importantly, she doesn’t give a sh*t. It’s The Simple Life energy you know and love!

Each episode of Cooking With Paris opens with Hilton grocery shopping for the episode’s ingredients, usually in over-the-top glamour (even Holly Golightly cosplay!) and it’s one of the most charming parts of the show. If there wasn’t literal camera footage showing her buying $1,000 in truffles or dismissing tinned fish with a classic “Ew,” I would never believe Hilton had ever grocery shopped. Bonus: Hilton hits up Gelson’s and Lassen’s for her ingredients; if you know, you know.

This has nothing to do with Hilton’s cooking, but tells me more about her lifestyle and personality than anything else on the show. Hilton, as a busy career woman, has three phones. That’s not too crazy in and of itself — celebrities are prone to weird quirks. It’s how she differentiates them is what made me laugh out loud. “One is for people I like, one is for business, and one is for prank calling people,” she says over dinner. “My mom and I, and my sister, love to do that.”

What’s even better is that Hilton’s mom, current Real Housewives of Beverly Hills star, Kathy Hilton, corroborates this claim. “I always said Star 69 was because of me,” she says while dining with her daughters on the show’s final episode. Excuse me? What sort of diabolical pranks with pulled within the Hilton household? Netflix, if you give the Hilton family a prank calling show I will be expecting royalties and an executive producer credit. (Also, if you’re too young to have experienced the terror of Star 69 for yourself, I can’t help you.)

Along with barely following cooking instructions unless she really feels like it, a core tenet of Hilton’s cooking is dumping edible glitter on everything. It’s a harmless, Hilton-core addition, and seemed perfectly suited for her Fantasyland-Italian fusion dessert, the unicorn-oli. Think a classic cannoli, if its creator was a five-year-old on a days-long sugar bender. The unicorn-oli is drenched in pink and purple frosting, layered with sprinkles and glitter, and fit for only the strongest sweet tooth.

Along with Demi Lovato, Hilton tries to make unicorn-olis as part of her Italian dinner feast, and it’s a straight-up catastrophe. The ricotta filing is too watery, and it creates an environment that can only be described as foul and low-key graphic. Thankfully, Hilton diffuses the disgust with a quip, saying that the unicorn-oli is just like her: glittery, fun, and a lot going on.

Hilton has the right reaction to cooking a holiday turkey: pure disgust. There are simply too many grotesque elements to cooking a whole turkey, and America has been silent on this issue for far too long. Hilton runs away from the raw turkey in a horror film day dream scene, but finally puts on a brave face in the name of holiday cheer. It’s also her funniest episode. She compares seasoning the turkey to “massaging some fat, hairy, gross guy” and rightfully gags upon finding the giblets.

“I was the kid in class who refused to even like cut open the frog in whatever that class was,” she says, forgetting biology as a concept. “This is even scarier.” Finally, as the perfect roast turkey emerges from the oven (and she and YouTuber Lele Pons decorate it with glitter, the Gucci emblem, and sparklers) Hilton commends the turkey for its ultimate sacrifice: “As least if he died he died for something...he was raging.”

There’s no shortage of dogs living the high life at Hilton’s mansion, but one of her dogs, obviously named Slivington based off her semi-new catch phrase, sliving, is living a little higher than the rest. She treats him to some caviar, because everyone else will be eating it, and to her, it’s only fair.