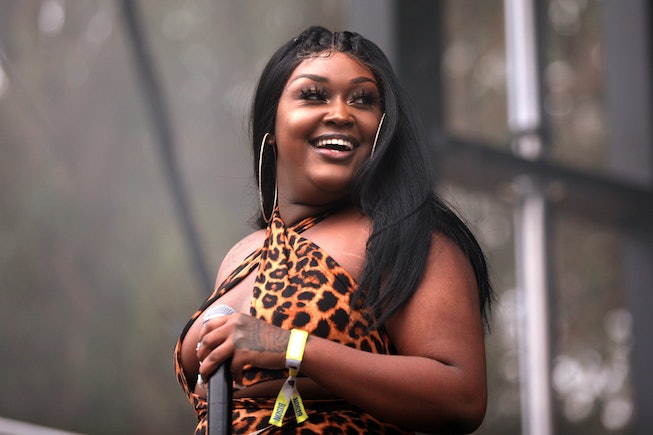 TikTok is my favorite social media app at the moment, primarily because I don’t do anything on it. I’m there for one reason, and one reason only: to laugh my ass off. And TikTok serves its purpose; I love watching people take on a bratty, BBL-induced personality, I love watching Gen-Zers roast Millennials. But there’s absolutely nothing I love more than the app’s CupcakKe remix sounds.

It all started off innocently enough. One day early on in the summer, I was watching a TikTok featuring Ariana Grande’s explosive 2016 single “Into You,” a song I happen to love dearly. Except this time, instead of Grande cooing that she was waiting for her man to “make a move,” there was a different voice, with a raunchier demand: It was CupcakKe yelling about getting her ass smacked. Reader, I howled.

It was not just Grande who got the CupcakKe remix treatment. No song on earth is safe from the rapper’s hilariously lewd lyrics off of her 2015 track “Vagina.” I’ve heard Lady Gaga explain how she didn’t ask for a free ride; her only request was for someone to “smack my ass like a drum.” I’ve experienced the ecstasy that is CupcakKe moaning over the glittering opening notes of ABBA’s “Dancing Queen.” When the opening of Adele’s “Hello” was punctured with CupcakKe’s staccato “HELLO!” and followed by how she was “wondering if after all these years you’d like to C*M!” I laughed until I felt hot tears run down my face. I’m not even being the slightest bit dramatic when I say we are mere weeks out from Beethoven’s “Moonlight Sonata” getting remixed with CupcakKe’s theatrical moans. If Mozart’s "Eine Kleine Nachtmusik" got one, I don’t see why not!

As reported by Insider, one of the earliest remixes to go viral on TikTok included 2021’s most popular teenager, Olivia Rodrigo, and her breakout hit "drivers license." Rodrigo sings her heart out, lamenting losing her boyfriend to another girl before she was able to drive him around: “And I just can't imagine how you could smack my ass like a druuuuum.” The sound made its way to TikTok on July 8, after originally being uploaded to YouTube by @heavenonvenus on May 1.

The trend caught on like fire. After all, it’s hard to imagine a song that wouldn’t be improved by CupcakKe announcing her intention to “slurp that dick til it c*m.” Creators like @ranvision and @manniepetty have been the most prolific with their output, but ultimately, there isn’t one main creative force behind the CupcakKe remix phenomenon on TikTok, which only adds to its ingenuity; there’s nothing more powerful than collective effort across a platform to keep people cracking up, on their toes, and spreading the gospel of CupcakKe while they’re at it.

NEXT UP
Culture
Spotify Wrapped Is The Only Social Media That Doesn’t Lie
Culture
A Britney Spears-Inspired Musical Is Coming To Broadway
Culture
Not One, But Two BTS Documentaries Are Coming
Culture
Kim Petras Defends Working with Dr. Luke (Again) As Kesha Trial Approaches