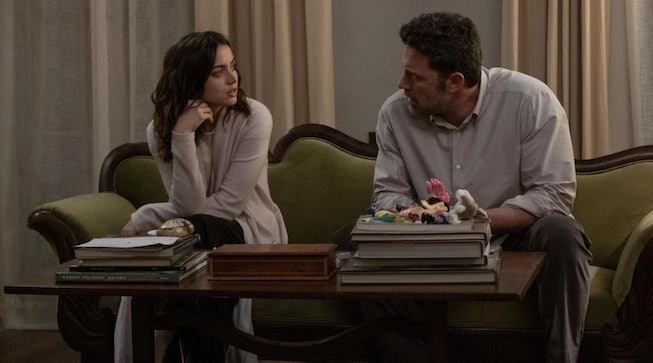 Deep Water, based on the aforementioned novel of the same name, is about Vic and Melinda, a wealthy couple living in small-town Louisiana. Vic (Ben Affleck) retired in his 40s after creating the chip that helps drones find their targets, a job so specific it knocks you over the head with indicating Vic’s murky morality, while Melinda (Ana de Armas) drinks a lot and has a series of affairs with dopey guys leagues below her. The two attend lavish parties with no occasion with their other wealthy friends every few weeks, where Melinda gets wasted and flaunts her flings, much to the chagrin of Vic, who pretends not to care because he “respects her,” but actually murders everyone she sleeps with. Vic also tends a small colony of snails in his basement, an obvious missed murder tactic opportunity that never contributes anything to the plot.

Vic first confesses he murdered Martin McCrae a friend who’s been missing for weeks, to a man Melinda is having an affair with, in the bathroom of a party. “I killed Martin McCrae,” he says, as if he’s telling someone what he had for breakfast that day. The confession is the alibi; nobody would be so stupid as to casually confess to a murder — except their gossipy friends eventually are convinced that it’s Vic murdering Melinda’s men. Affleck’s Vic is emotionless, but it comes across less as stone cold serial killer and more like Pete Davidson’s Saturday Night Life Chad character, a dude so passive all he can do is shrug and say, “okay.” (For the uninitiated, Affleck also looks like this meme of himself, the most exhausted man whose ever smoked a cigarette.) Meanwhile, de Armas plays up the theatrics of Melinda to the point that Melinda is no longer an It Girl, but someone desperately trying to be an It Girl. Affleck does so little and de Armas does so much, which feels reminiscent of the amounts of effort often put forth in a heterosexual relationship, but onscreen makes them appear as if they are in two entirely different films, mismatched in tone. The only time we see emotion from Affleck is when he drops off their precocious daughter at school, a time when we’re supposed to see him as “a good dad.”

It’s worth mentioning that the cinematography is gorgeous, with some dreamy shots that include Elordi’s corpse floating underwater in a pool (trust me), or Melinda taking down her hair and squatting at a piano in the fractured light of a disco ball, or a snail slithering over Affleck’s hand. And the film isn’t not fun — it’s fun to yell at the screen as Vic is the most idiot criminal in the history of serial killers. It’s fun to gawk at de Armas’ beauty. It’s fun to wander about this wealthy community of retired Gen X-ers who’ve taken over small-town Louisiana. But the best erotic thrillers are fun in their absurdity, in the way they don’t take themselves seriously, or in the way they satirize society — which brings me to my biggest beef of the film: Like Vic, it purports itself to be sexually free, but it ultimately is just about someone who can’t deal with an open relationship.

You find yourself asking: Couldn’t this all be solved by...a conversation? What if Vic were to simply ask to renegotiate the terms of their non-monogamy? He oscillates between seemingly not caring about her affairs, and then spying on her suitors. Outwardly, Vic considers himself to be progressive, but instead of acknowledging his own feelings of emasculation, he simply murders people.

It makes me think about 1992’s Basic Instinct, one of the greatest erotic thrillers of all time, where characters with agreed upon terms of non-monogamy end up killing precisely because of their inability to deal with the arrangement. In Basic Instinct, Catherine, played by Sharon Stone, cries, “I shouldn’t have let her watch,” after her girlfriend Roxy dies in an attempt to murder the detective Catherine was sleeping with — sexual encounters which Roxy willingly participated in as a voyeur. It’s not surprising of course that Disney, let alone any major studio, would make a film portraying an open relationship as one that is inherently unethical, one where the person with the upper hand is a controlling alcoholic, leaving the other person with no choice but to kill.

Of course, Deep Water doesn’t have to atone for the sins of a canon of movies that portrays cheating as deadly wrong, instead of something that happens in life. But like Vic, the film purports itself to be open, while ultimately seeking to preserve the sanctity of the home — no matter the cost.