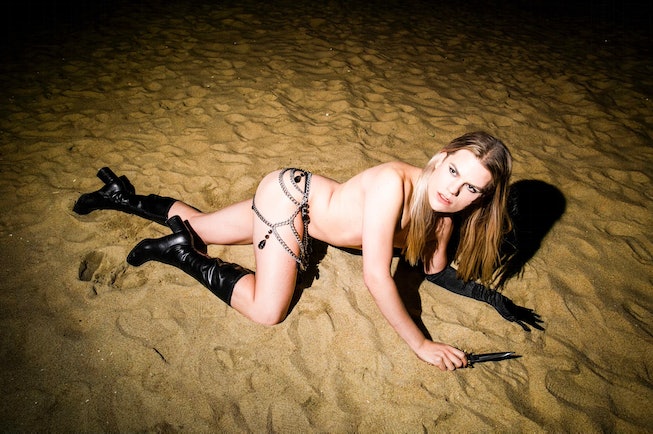 There’s critical overlap between mythological figures like Persephone, Sedna, and Lilith. These goddesses, each misunderstood and wielding an undeniable, sexual power, reside on the fringes and in the underworlds of their respective legends. But don’t get it twisted, none of them are cowering in the depths — they’ve been calling the shots since the dawn of time. And joining the ranks from the sewer pits of New York City’s bathhouses is a new entity eager to inflict vengeance on any foolish, deserving swine: Dexter Driscoll.

To bring the vision behind “All The Boys Want To Be My Girl” to life, Driscoll enlisted the help of Dylan Mars Greenberg, the director of the micro-budget 2015 feature film Dark Prism, as well the music videos for actor Michael C. Hall’s rock band, Princess Goes to the Butterfly Museum. The victims, at first, seem more than willing to accept their fate as human sacrifices at the altar of Driscoll. “You can’t ignore the emotion/ Inspire hate and devotion,” Driscoll warns right before guitar riffs explode the song wide open. There’s an allure to the track that leaves me feeling like it’s the closest thing we have to a punk siren’s song. After all, the hypnotizing hook lays it bare: “Once he gets down on his knees/ My baby never felt so free.” But once Driscoll gets to work with the dagger, the fantasy shatters, and screams for mercy are drowned out by good, old-fashioned bloodlust.

“All The Boys Want To Be My Girl” is the first song Driscoll wrote as part of the forthcoming album, Perfect Love. “I wrote it from a place of rage and resentment mostly talking about getting unsolicited panty pictures from men,” says Driscoll of the track. “Who holds power in any given dynamic? Publicly, privately, socially… It’s a sober assessment of my romantic life and the consequences so I can get over it.”

Watch the video for “All The Boys Want To Be My Girl,” below.