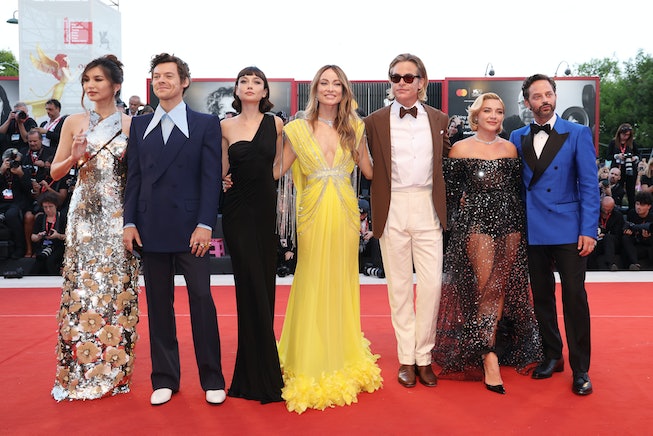 So often the press tour shenanigans of a highly-hyped film are just as entertaining, if not more entertaining than the film itself. House of Gucci? A fun movie. But Lady Gaga’s press tour for House of Gucci, which, each week brought us a new, over-the-top story about her preparation for the role? Oscar-worthy.

Don’t Worry Darling has all the elements of a must-see, highly-anticipated film of the year: two young, hot stars, one of which is Harry Styles in his first film role since Dunkirk; Olivia Wilde in the throes of public custody battle directing; Styles and Wilde starting to date while filming; a leaked video involving Shia LeBoeuf, a rumored feud between Florence Pugh and Wilde. Fact is, famously, wilder than fiction. And this is all before its release! The film officially premiered to a five-minute standing ovation at the Venice Film Festival on Monday, but reviews have been less than sparkling, with the BBC calling it “an empty shell” and the Guardian described the film as “a movie marooned in a desert of unoriginality.”

We’re not sure yet if the film is good, but if there’s anything that’s certain in this life it’s that the antics of celebrities will never cease to entertain. Read on for all the Don’t Worry Darling drama...so far.

It was first reported in December 2020 that LeBoeuf had been dropped from the film, who was originally in Styles’ role. Wilde said she dropped him because of his “combative energy” and to keep Pugh “safe.” This was after FKA Twigs accused LeBoeuf of sexual and emotional abuse.

“I say this as someone who is such an admirer of his work: His process was not conducive to the ethos that I demand in my productions,” Wilde told Variety. “He has a process that, in some ways, seems to require a combative energy, and I don’t personally believe that is conducive to the best performances.”

“A lot came to light after this happened that really troubled me, in terms of his behavior,” Wilde said. “For our film, what we really needed was an energy that was incredibly supportive. Particularly with a movie like this, I knew that I was going to be asking Florence to be in very vulnerable situations, and my priority was making her feel safe and making her feel supported.”

August 24: Pugh is rumored to have made one-third what Styles made

In August, the website Showbiz Galore reported that Pugh was paid less than a third of what Styles made ($700,000 to Styles’ $2.5 million), a rumor that Wilde denied.

"There has been a lot out there that I largely don’t pay attention to. But the absurdity of invented clickbait and subsequent reaction regarding a nonexistent pay disparity between our lead and supporting actors really upset me,” Wilde told Variety. “I’m a woman who has been in this business for over 20 years, and it’s something that I have fought for myself and others, especially being a director. There is absolutely no validity to those claims."

A video leaked by Page Six shows Wilde asking LeBoeuf to stay on after he quit the film.

“I wanted to reach out because I feel like I’m not ready to give up on this yet,” she said in the footage, which was filmed in her car in August 2020. “I, too, am heartbroken, and I want to figure this out.”

She continued: “I think this might be a bit of a wake-up call for Miss Flo, and I want to know if you’re open to giving this a shot with me, with us.”

Additionally, in email messages sent to Variety, LaBeouf claims he “quit the film due to lack of rehearsal time” on August 17, 2020. “You and I both know the reasons for my exit. I quit your film because your actors and I couldn’t find time to rehearse,” he wrote.

September 5: Harry Styles is accused of spitting on Chris Pine

Footage from the Venice Film Festival premiere shows Styles taking his seat to view the film and appearing to spit on co-star Chris Pine, who looks down into his lap to notice the alleged dribble. It’s unclear if he actually did spit, but the seven seconds is gasoline for the already raging fires of controversy.

September 5: Pugh and Wilde are icy towards each other at premiere

Pugh and Wilde allegedly didn’t make eye contact even once during the five-minute standing ovation, nor did they interact on the red carpet. They also sat seats away from each other, according to The Hollywood Reporter — fueling rumors that the two were already on the outs. As I, too, would be, if someone called me “Miss Flo.”

In the least consequential controversy surrounding the release of Don’t Worry Darling, Chris Pine seemed to dissociate during the press conference. Relatable, but darling, should we be worried?

September 5: Wilde dismisses drama between her and Pugh

On Monday, Wilde spoke to journalists at a panel alongside Pine, Styles, and Gemma Chan, when a reporter asked about Pugh’s absence. "Can you just clear the air and address if there's been a falling out [with Pugh] and if so why? Because it's something that people are discussing."

According to People, Pugh is currently filming Dune: Part Two and was planning to fly into Venice from the set, and wasn’t planning to land until after the press conference.

"Florence is a force, and we are so grateful that she's able to make it tonight despite being in production on Dune,” Wilde responded. I know, as a director, how disruptive it is to lose an actor even for a day, so I'm very grateful to her, to Denis Villeneuve for helping us. And we're really thrilled we'll get to celebrate her work tonight. I can't say enough how honored I am to have her as our lead. She's amazing in the film."

She continued: "As for all the endless tabloid gossip and all the noise out there, I mean, the internet feeds itself. I don't feel the need to contribute. It's sufficiently well nourished."

September 6: Pine’s reps deny he was spit on

Pine’s team vehemently opposes Spit Gate. “This is a ridiculous story — a complete fabrication and the result of an odd online illusion that is clearly deceiving and allows for foolish speculation,” Pine’s rep said in a statement to Variety. “Just to be clear, Harry Styles did not spit on Chris Pine. There is nothing but respect between these two men and any suggestion otherwise is a blatant attempt to create drama that simply does not exist.”

NEXT UP
Culture
The Cutest Couples At The 2023 Grammys
Culture
The Madonna Biopic Is Being Scrapped
Culture
Kaia Gerber Won’t Stop Until She’s Cast As Patti Smith In A Biopic
Culture
The 2023 Oscar Nominations Full List Is Here
Style + Culture, delivered straight to your inbox.