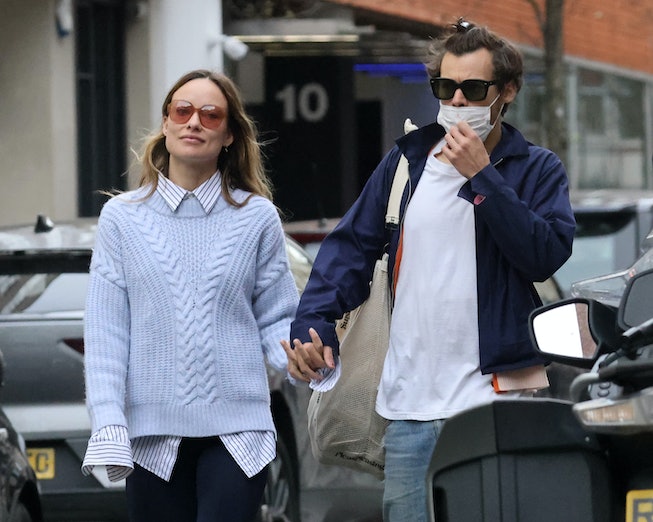 Harry Styles and Olivia Wilde have been a topic of conversation since the two were spotted holding hands nearly two years ago. Since then, a small, but highly opinionated, group has taken to criticizing the couple — commenting on everything from their age difference (Wilde is 10 years older) to Wilde’s dancing skills, and their presumed lack of compatibility. In a new interview with Rolling Stone, both stars opened up about dealing with “toxic” internet trolls who question their relationship.

Styles explained that he’s well aware of the comments people make about his love life, and spoke delicately about the “corner of Twitter” that watches his every move. “That obviously doesn’t make me feel good,” he said. Though the singer clarified that he does see the good in his fan base, he also noted that some of its members make his romantic life difficult. “Can you imagine going on a second date with someone,” he said, “and being like, ‘OK, there’s this corner of the thing, and they’re going to say this, and it’s going to be really crazy, and they’re going to be really mean, and it’s not real... But anyway, what do you want to eat?’”

When Styles and Wilde began dating in 2020, their relationship quickly made headlines. The unexpected couple met on the set of Don’t Worry Darling, which is set to premiere on Sept. 23. Styles stars in the film alongside Florence Pugh, while Wilde directed the feature. At first, people said their relationship was inappropriate because Wilde was technically his superior on set. People also questioned the timing of it all, because the pair were publicly spotted shortly after Wilde broke up with her ex, Jason Sudeikis, with whom she has two children.

As their relationship developed, many of Styles’ fans expressed clear disdain for his girlfriend. “It’s obviously a difficult thing to feel like being close to me means you’re at the ransom of a corner of Twitter or something,” Styles said, reflecting on the online discourse. “I just wanted to sing. I didn’t want to get into it if I was going to hurt people like that.”

Despite the negativity Wilde’s received, she said Styles’ fans are “deeply loving people.” When asked about her experience dealing with internet trolls, she said, “What I don’t understand about the cruelty you’re referencing is that that kind of toxic negativity is the antithesis of Harry and everything he puts out there.” She diplomatically added, “I don’t personally believe the hateful energy defines his fan base at all. The majority of them are true champions of kindness.”

Don’t Worry Darling hits theaters Sept. 23. Styles is currently on tour and will appear in My Policeman alongside Emma Corrin this fall when it streaming services Oct. 21. He’s said that while he doesn’t plan to return to acting in the near future, he’s already starting to think about his fourth studio album.

NEXT UP
Entertainment
Harry Styles' "As It Was" Grammy Performance Featured A Silver Tinsel Onesie
Entertainment
Emma Chamberlain Is Officially Moving to Spotify On February 23 (Exclusive)
Entertainment
Beyoncé Is Now The Most Awarded Artist In Grammy History
Entertainment
Taylor Swift Sparkled In Midnight Blue On The 2023 Grammys Red Carpet
Style + Culture, delivered straight to your inbox.