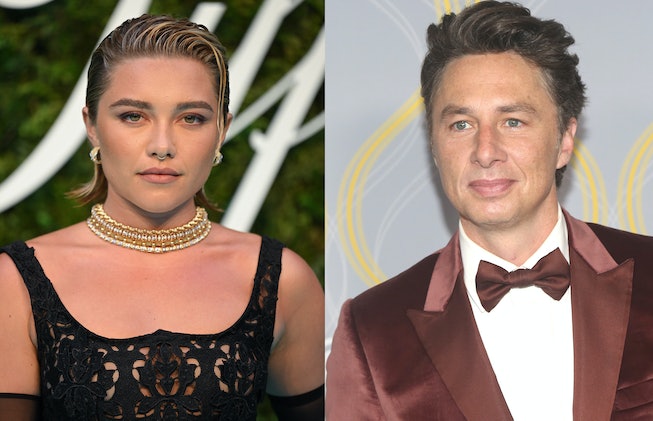 After nearly three years of dating, Florence Pugh and Zach Braff have called it quits. Since they began dating in 2019, the two actors have opted to keep their relationship private — largely due to critiques about their 21-year age gap — and are taking the same approach with their breakup. In an exclusive interview with Harper’s Bazaar, Pugh explained the reasoning behind her relative silence on the matter, and further advocated for respecting celebrities' personal lives.

“We’ve been trying to do this separation without the world knowing because it’s been a relationship that everybody has an opinion on,” Pugh said. “We just felt something like this would really do us the benefit of not having millions of people telling us how happy they are that we’re not together. So we’ve done that. I automatically get a lumpy throat when I talk about it.”

Throughout Pugh and Braff’s relationship, both stars complained about being bombarded by unwelcomed opinions (the pair started dating in 2019, when Pugh was 23, and Braff was 44). In 2021 Pugh was interviewed by The Times UK and expressed her frustration with strangers talking about her love life. “I think it bugs people that it’s not who they expected. But it’s my life and I’m not anything to please people or make it a better headline or story,” she said. “I want to also be a person!” “I am 24 years old,” she continued. “I do not need you to tell me who I should and should not love, and I would never ever in my life, ever tell anyone who they can and cannot love. It’s not your place, and really it has nothing to do with you.”

Pugh also doubled down on the need for privacy. “Whenever I feel like that line has been crossed in my life, whether it’s paparazzi taking private moments, or moments that aren’t even real, or gossip channels that encourage members of the public to share private moments walking down the street, I think it’s incredibly wrong.”

“I don’t think that people, just because they have this job, that every aspect of their life should be watched and written about,” she continued. “We haven’t signed up for a reality TV show.”

On the acting front, Pugh is next starring in the Olivia Wilde-directed Don’t Worry Darling, opposite Harry Styles as a 1950s housewife trapped in a surreal reality-gone-wrong, out September 23rd. Next year, she’ll also star in Dune: Part Two and Christopher Nolan’s highly-anticipated Oppenheimer. She’ll also star next year in A Good Place, a film she collaborated on with Braff.

NEXT UP
Entertainment
Emma Chamberlain Is Officially Moving to Spotify On February 23 (Exclusive)
Entertainment
Beyoncé Is Now The Most Awarded Artist In Grammy History
Entertainment
Harry Styles' "As It Was" Grammy Performance Featured A Silver Tinsel Onesie
Entertainment
Taylor Swift Sparkled In Midnight Blue On The 2023 Grammys Red Carpet
Style + Culture, delivered straight to your inbox.