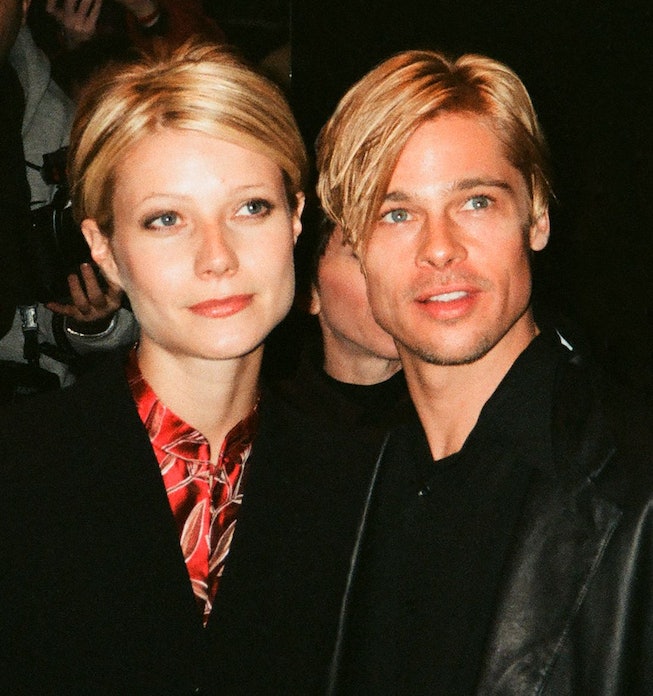 Before Gwyneth Paltrow was a successful, slightly metaphysical, wellness guru running the multimillion dollar lifestyle brand, GOOP, she was a beloved actress in the ‘90s who sometimes made questionable choices when it came to her hair. As a woman who came up in an era in which “crimping” was the hottest thing a person could do to their tresses, Paltrow’s hair has seen its fair share of damage, which is what led her to create her GOOPGLOW Restore + Shine serum as a quick fix to smooth damage, frizz, dryness, and split ends. Naturally, GOOP, like all things in film, television, and media, used the undeniable force of the nostalgia industrial complex to introduce the new product — including that one seminal picture of her and her once-upon-a-time fiancé, Brad Pitt.

With the help of a producer armed with photos of her red carpets hairstyles from yesteryear, Paltrow shared the real deal with her hair journey. Her rare, brown-hair era took place while starring in the 2000 film Bounce, opposite Ben Affleck: “It took a beating being all that color. And it was actually a lot worse when I started to try to go back to blonde.” The difficult (and very drying!) journey back to her natural color led to a tragic crimped moment at the SAG Awards. “I think we were going for a beachy, wrecked hair vibe,” she says, after admitting she could have used her new GOOP serum back then. If there’s anything Paltrow knows how to do, it’s sell a product!

But the pièce de résistance of the nostalgic hair journey was one that has circulated every ‘90s nostalgia-focused social media account for years: her matching haircut with Brad Pitt, whom she dated from 1994 to 1997. The now-iconic photo took place at the 1997 premiere of Pitt’s film The Devil's Own, in which Paltrow and Pitt stunned generations to come in sleek, black fits and matching cropped, blonde locks. “We went to the same stylist for the cut. Chris McMillan cut both of our hair like this,” said Paltrow of the matching cut. She also revealed that then-couple didn’t match their looks on purpose, stayed silent on whether or not it was like being with a twin “sexually,” and laughed off her producer’s comment that he can contact Pitt on Grindr right away. Excuse me?

Pitt himself has a storied past as a shapeshifter who takes on the look of whoever he’s dating at the time, which is another post entirely. Watch the video, below.

NEXT UP
Culture
Spice Girls May Reunite For King Charles’ Coronation
Culture
An Ode To Stripperweb, The Beloved Sex Worker Forum
Culture
The Cutest Couples At The 2023 Grammys
Fashion
Jenna Ortega Is The Face Of Adidas’ Newest Line
Style + Culture, delivered straight to your inbox.