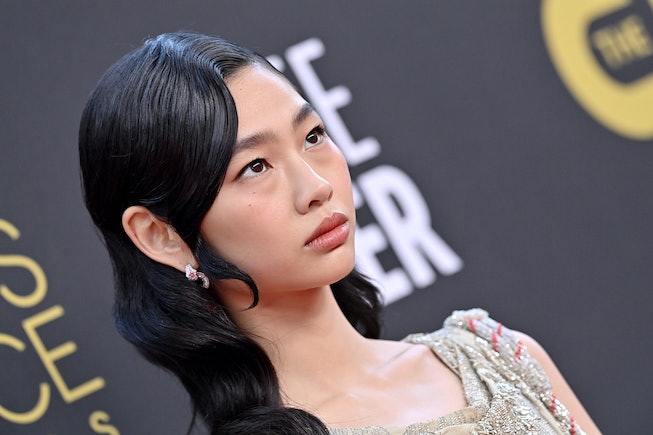 Following the whirlwind success of Netflix’s Squid Game, Hoyeon Jung has locked in her next role in Apple TV+’s forthcoming thriller series, Disclaimer.

As one of the breakout stars of Squid Game, it was only a matter of time until Jung secured a buzzy new prospect, and Disclaimer couldn’t come with more prestige if it tried. The new show, based on the eponymous novel by by Renee Knight, will be directed by critically acclaimed Spanish director Alfonso Cuarón, and boasts a stacked cast, including Cate Blanchett, Kevin Kline, Sacha Baron Cohen, and Kodi Smit-McPhee.

Blanchett is leading the thriller, playing the role of Catherine Ravenscroft, a respected television documentary journalist, who has built her career on exposing the transgressions of powerful institutions. Meanwhile, Jung will will take on the role of Kim, an ambitious and hardworking woman who tries her hand at working with Catherine to earn her big break in the industry. And since the series is a Cuarón-directed thriller, the plot revolves around a dark, twisted secret Catherine had thought was long buried in her past coming back with a vengeance to haunt her. Scandal incoming!

Earlier this month, Jung walked away with the 2022 SAG Award for Outstanding Performance by a Female Actor in a Drama Series for her work as Sae-byeok on Squid Game, a North Korean defector and petty thief with a heart of gold. Prior to her debut acting performance, Jung was the runner-up on Season 4 of Korea’s Next Top Model and a top model in her native South Korea. In October 2021, she became the new face of Louis Vuitton as the luxury brand’s newest Global House Ambassador for Fashion, Watches, and Jewelry.

In an interview with W Korea, the actress spoke about her character in Squid Game, stating, “I think I was able to accept Sae-byeok without any big difficulties because I am similar to her. In 2016, I left Korea to further my modeling career overseas, and I spent a lot of time alone. At the time, the emotion that I felt the most was loneliness. That feeling of loneliness while trying to persevere and live isn’t all that different.”

“I am well-aware of how much work I have to do and learn to become a better actor and I try not to dwell too much on the success of Squid Game,” she said to The Korea Herald regarding her sudden rise to stardom. “For the fans, I think it is best to show Jung Ho-yeon improved as an actor, in my next work.”