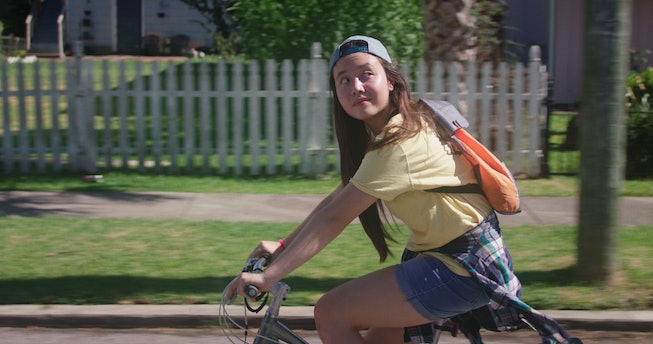 Coming-of-age films rarely depict a realistic experience of being a teenager, which is grosser and messier than ‘80s teen rom-coms will have us believe. In Mei Makino’s directorial debut Inbetween Girl, she captures the brutal growing pains of being a teenager, without the deus ex machina of a romance or some grand personal achievement to carry its protagonist to growth.

The film stars Emma Galbraith as Angie, a 16-year-old growing up in Galveston, Texas who is really going through it. She has one unpopular friend; her parents are getting divorced; her white mom is a workaholic and her Chinese father immediately shacks up with a Chinese girlfriend and her daughter, who are everything Angie isn’t. To make matters more complicated, she starts hooking up with Liam, the hottest guy in school who also has an Instagram-famous — and sexually abstinent — Catholic girlfriend. Angie deals with all her feelings through talking to her future self vlog-style for a time capsule and through doodling cartoons she posts on Instagram.

It's a directorial debut that has some growing pains of its own: I found myself wanting more of her kooky best friend, who is absent for most of the film, along with more voiceovers that give us a peek into her inner monologue, or more cheeky doodles that convey her emotional state. But nevertheless, it’s the kind of film you wish you had when you were in high school; one that conveys the claustrophobic pain of knowing you’re more sane than the adults around you, as well as the emotional messiness that comes from a major crush, let alone one that is unavailable. But Inbetween Girl doesn’t rely on classic tropes; it’s not a romantic interest that makes or breaks Angie's high school experience, it’s figuring out how to stay true to herself when things are tumultuous, which she does by retaining her sense of creativity and healthy skepticism about Liam and the world.

All these are feelings that Galbraith, who was 16 when she first auditioned for the project, felt intimately close to. Galbraith and Makino also worked closely together to develop the script, much of which was based on Galbraith's own experiences, especially about being biracial.

“I hope there’s a rawness. I think that’s part of what I wanted, just to play as much of a real person as I could, just strip away any major theatrics or anything and just focus on all those uncomfortable, gross experiences, because being a teenager is so gross,” she tells NYLON. “I wanted to dig into that because romanticizing the experience, I feel like that wouldn't be true because Angie goes through so much pain and I wanted to make sure that was portrayed in the most honest way possible.”

This was such a sweet movie! I wish I had something like this when I was a teenager.

So you were in high school while shooting this movie? I feel like that's pretty unique, too, because a lot of movies about high schoolers star 25-year-olds.

I think it was cool. Off the bat they wanted to cast high school-age people because I think Mei was dedicated to telling a story that felt as relevant as possible in all aspects.

A lot of the emotions in this film are universal, like struggling with finding yourself and feelings of self-worth. Did you feel close to those feelings since you’re the same age as the character? Did those emotions feel familiar to you?

Yeah, I have gone through a lot of the same things. When we developed Angie’s character, Mai and I spent like a year just going back and forth talking about it, and the script was going through rewrites and changes as the character was going through a lot of different changes. A lot of her character is based on conversations that Mei and I had about being a teenager, being an Asian female teenager, and being biracial. A lot of what became of Angie’s character were taken from share’s experiences that Mei and I have had, or things that are specific to my experience especially as a Chinese-American teenager. There’s definitely a lot of similarities. When we were shooting, I remember thinking, “This girl is a parallel universe to me in some ways,” just because there’s so much overlap with the whole process of creating her. I think there’s very different things between the two of us. I definitely felt that a lot of my experience as someone coming into myself and someone being from the same background went into it.

How did being newer to acting help contribute to your performance? Do you think it lent a certain rawness?

I hope there’s a rawness. I think that’s part of what I wanted, just to play as much of a real person as I could, just strip away any major theatrics or anything and just focus on all those uncomfortable, gross experiences, because being a teenager is so gross. I wanted to dig into that because romanticizing the experience, I feel like that wouldn't be true because it’s such a painful thing. Angie goes through so much pain and I wanted to make sure that was portrayed in the most honest way possible.

I like what you said about not wanting to romanticize teen angst.

There are romantic aspects about that part of your life for sure and I think there are plenty of points where Angie finds a lot of joy in her life, but I didn't want to romanticize her pain especially or romanticize her struggle. Because when you’re in it, it feels like you’re never getting out, and I wanted to make sure that feeling was in the movie.

One other thing that struck me about your performance is how confident and self-assured Angie is, even though she’s going through so much. I’m curious about that decision — or is that just more a reflection of how you are?

I think confidence can definitely be a self-defense mechanism. It’s almost a “fake it ‘til you make it” thing. The thing you feel strongest at is the thing you feel most insecure about deep down because it's your most prized possession about you. I think for Angie, her confidence is in large part a shield against vulnerability. I wanted to make a very clear difference between the way she talks to her future self, the way she talks to her parents, and the way she talks to people she likes. With her future self, she doesn’t have to pretend as much. I think she’s confident in knowing that things suck for her right now, but the confidence she exhibits around other people most of the time is more self-defensive because everything at the beginning is falling out of control for her.

When you were growing up, what kind of coming of age movies did you watch? How do you feel like Inbetween Girl is different from those?

I think one of the first movies specially about high school-aged girls that I watched was The Hunger Games. I was in middle school and I had watched that and honestly I think that was good for me because I think it introduced me to coming-of-age stories without the romance part being the main focus. In fact, romance in that movie is a very political thing and I found that very helpful and influential. This was way more recent, but right before we started filming the trailer in 2018, To All The Boys [I’ve Loved Before] came out and that was another big one for me. It was the first Asian lead in a teen rom-com ever, which was a big deal to me. I loved that movie.

I think what I’m interested in now is exploring projects that find some sort of balance between the two, so not just placing women of color into stories that have typically been inhabited by white women. Not just movies about being a woman of color but somewhere in between, somewhere that’s more balanced, because there should be more stories like that because that’s how it is in real life. We have all these aspects of our personalities, but they don’t all dominate. For me the whole question of my cultural identity doesn’t completely dominate my life, and the whole question of my romantic life doesn't dominate my life either. I’m interested in characters that explore that a little more and portray the full scope of these struggles. That’s a big thing I loved about Inbetween Girl; it covers the blend between the different issues and how they overlap and intersect.