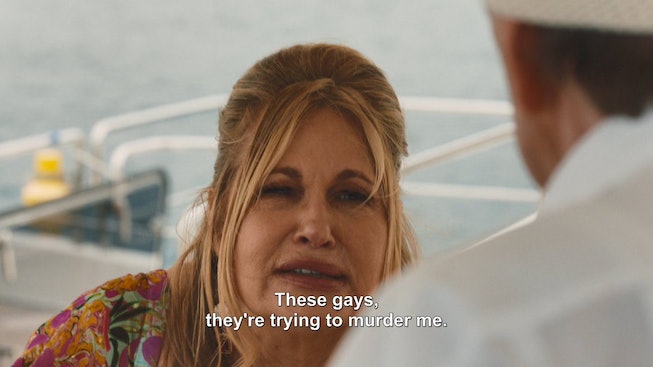 The first time I remember watching a moment that I knew was going to be viral was during the 2013 Academy Awards, when Jennifer Lawrence tripped as she walked onstage to accept the Best Actress award for her performance in Silver Linings Playbook. We may never know if the trip was fabricated or not. But it felt a little too convenient that everyone’s favorite “relatable” actress would have a charmingly embarrassing attention-causing moment during her meteoric rise to fame.

Of course, celebrities have been concocting viral moments for themselves even before “viral” was a thing; they used to be called publicity stunts. You could write a dissertation on Paris Hilton’s use of “that’s hot” on The Simple Life as a career-defining intentionally viral catchphrase.

So it only makes sense that screenwriters would pick up on this tactic. Watching the Season 2 finale of The White Lotus was a collection of intentionally viral moments tailor-made for the subtitles-on corners of Twitter — particularly Tanya’s line, delivered by the magnificent fan-favorite Jennifer Coolidge: “These gays, they’re trying to murder me.” It’s a phrase that alone has inspired entire articles and spawned a screenshot I saw no less than two dozen times while scrolling through Twitter in the first 24 hours since the finale aired on Sunday night.

“Writing for Twitter,” is a recent phenomenon that is becoming more obvious — and it’s one I’m not mad at. There was similar fanfare on Twitter over Jenna Ortega’s dance in Wednesday, as there was for the entire M3GAN trailer — but particularly the few seconds in which the murderous doll dances with the deranged abandon of a Sia music video, which ignited an obsession particularly, for whatever reason, in the queer Twitter community.

Last week, the trailer for a film called Cocaine Bear lit up Twitter. 8.2 million people have watched the trailer for the film, directed by Elizabeth Banks, about a bear that ingests a duffel bag of cocaine and goes on a killing spree in a rural Georgia town. And yes, the bear has a Twitter account.

M3GAN and Cocaine Bear are the kinds of movie that is made for the Internet — the kind of movies people will flock to the theater to see just so they can talk about it with each other, e.g. Snakes on a Plane.

“Banks’ film is also one of several coming at the start of 2023 that seem to be made for the internet. Not necessarily that you’d want to watch them there — though they all seem primed to stream while you scroll Instagram — but that they’re either born of some piece of internet discourse or designed to be a part of it,” writes Angela Watercutter in a recent column for Wired. “With Cocaine Bear the gimmick is obvious: Make a movie so seemingly horrific and hilarious that people won’t be able to stop themselves from transforming it into one-liners and reaction GIFs.”

Of course, I’m skeptical of intentionally viral moments. I want to roll my eyes at the blatant pandering. But in the same way that I don’t mind targeted ads, I would rather be pandered to than only have entertainment take itself too seriously. That’s part of the beauty of The White Lotus and M3GAN and Cocaine Bear (though to be clear, I don’t put the latter in the same category as the brilliance that is The White Lotus) but they’re all in on their own joke. Intentionally viral moments help give us visual references as we gather around the water cooler that is the internet — little slices of pop culture we can snack on when words fail us. To write like that suggests a kind of specific cultural fluency, not pandering.

The beautiful irony is that making something intentionally viral actually allows gives roots to a work to make it last longer than the 24-hour news cycle. Take the It’s Always Sunny in Philadelphia meme where Charlie has dozens of papers tacked to a wall with bright red arrows to explain his mailroom conspiracy theory. I’ve never seen that episode and I reference It’s Always Sunny once a week because of this meme — and it’s for an episode that aired seven years ago and a show that’s been off the air for two years.

Nobody will be tweeting about The White Lotus in two days — but people will tweet the “these gays, they’re trying to murder me” screen cap forever.