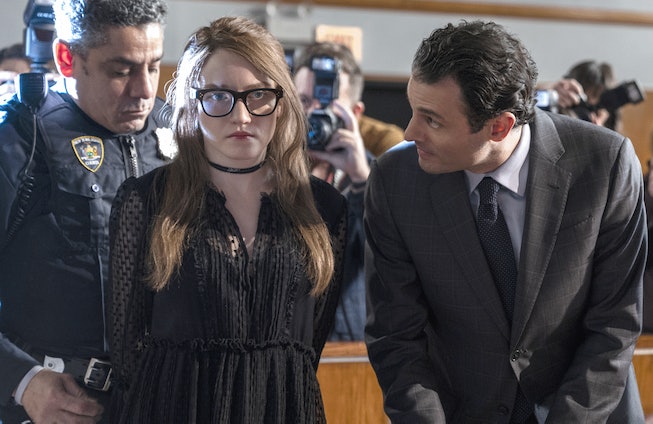 The highly-anticipated Anna Delvey Netflix series from Shona Rhimes Inventing Anna is out this Friday — and we couldn’t be more ready to hear her weird accent, gawk over 2014 fashion, and watch her swindle the real-life versions of the cast of Gossip Girl.

Inventing Anna is part of an upswing in coverage on America’s favorite topic: swindlers, especially those who have turned into accidental cultural icons, an obsession that’s been solidified by the sheer number of pieces of media around Elizabeth Holmes out or forthcoming.

But there was a swindler who captured the minds of America right before Anna Sorokin aka Delvey. If you don’t remember the name Billy McFarland, you surely remember the two most cursed words in the English language: “Fyre Fest.” It’s both a little-known fact and makes all the sense in the world that McFarland and Delvey actually crossed paths in scammer paradise New York City. Here’s everything we know about their weird... friendship?

How did they meet?

According to Page Six, Delvey knew people McFarland’s team for Magnises, the dubious credit card company he started that helped its rich loser members get into parties.

Delvey apparently asked to stay the chic Soho loft headquarters of Magnises for a few days — and then refused to leave for months. McFarland was reportedly too “polite and non-confrontational” to tell her to leave. “He hinted, the staff hinted,” explains the source. “She had Balenciaga bags and clothes everywhere.”

What did she do while she was there?

Apparently, she just hung out. “She hung out and went to the parties,” the source told Page Six. “She was there, just sitting there — all the time.” In one Inventing Anna scene, she even makes fun of McFarland for deciding to call his ill-fated event “Fyre Festival,” and honestly, she’s not wrong.

How did she eventually leave?

The source said McFarland’s company wound up moving into a townhouse, sharing: “That’s the only way they got her out! She had been there for four months!” It’s unclear if the company’s move was in fact, a last-ditch effort from McFarland to unhook himself from Delvey.

When did this happen?

2013, so early aughts in McFarland and Delvey’s scam careers. It wasn’t until 2017 that McFarland threw the cursed Fyre Fest and 2018 that Delvey’s scams were uncovered in the New York Magazine article "How Anna Delvey Tricked New York’s Party People” by Jessica Pressler. Both are now behind bars for their crimes. Perhaps they can reunite when they’re out of prison?