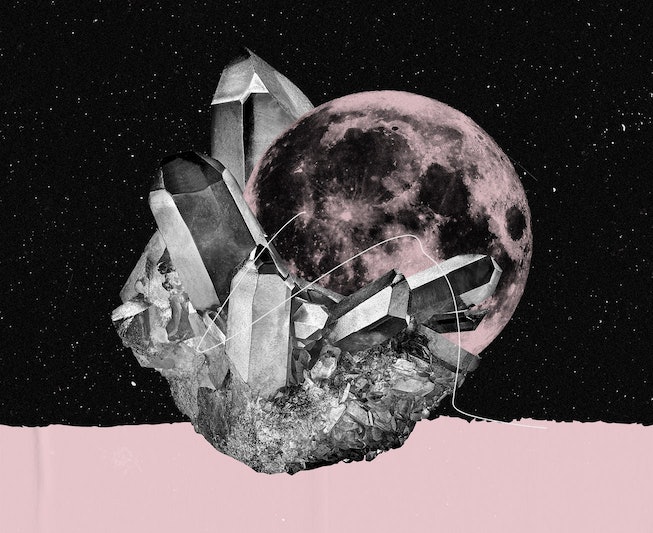 Welcome to a brave, bold, messy 2023! If, upon meeting this momentous new year, you feel like thrice-boiled sh*t, congratulations: You’re right on schedule. Though Jupiter is now in Aries, blasting us into a new creative decade, it doesn’t feel like much of a bright tomorrow just yet. Indeed, with Mercury freshly retrograding since December 29, the New Year’s hangover preempts the celebration. In Capricorn, the sign of big-picture planning, this retrograde hacks into any manufactured positivity. The future is indeed bright, but only if you lay down the groundwork. Take the sun-Mercury conjunction (or cazimi) on January 7 to hit the little details with light and optimism.

It’s not just Mercury that has us in the cold. Since Halloween, Mars has been retrograding in Gemini, and finally comes unstuck on January 12. This retrograde period has introduced dreadful uncertainty about the shape of things to come, as the world allegedly moves on from the ravages of the last three years. If you’ve felt off course these past months, take stock of what you’ve explored, experimented with and learned, and slowly integrate them as the path steadies. Take the Cancer full moon, on January 7, to map the chariot’s course forward, and get ready to ride hard once Mercury goes direct on January 18.

Mars resuming direct course delivers a surge of fire, compounded by the entrance of Lilith into Leo (January 8) and the asteroid Juno into Aries (January 13). According to the Zohar, Lilith “bears the resentment of the moon’s diminishment,” the dark vengeance which builds when our feelings are invalidated or punished. In the sign of talent and affirmation, through October, Lilith will demand retribution for the ways we’ve surrendered and sacrificed ourselves to make others feel strong. Juno, meanwhile, is no stranger to revenge, having brought hellfire and devastation upon all her husband’s extramarital lovers. With Juno in Aries and Lilith in Leo, you’re called to speak up for yourself and demand what’s yours. Claim this blinding firepower to correct any imbalances, but beware of melting down in a blaze of overblown self-righteousness.

With so many hard stalls and jump starts, perspective will be hard to come by this January. But the advent of Aquarius season on the 20th, followed by an Aquarius new moon on the 21st, shifts our POV to the quantum realm. On the 22nd, the water-bearer’s ruling planet, Uranus, goes direct after five months in backward motion. The race to the event horizon is back on schedule; get yourself sorted so you don’t crash upon departure.

You’re at the start of a major rebirth. Inevitably, in the rush of new life, you’ll have to face the presence of destruction. In your tenth house of career, Venus and the sun will cross the underworld gates of Pluto (on January 1 and 18, respectively), forcing you to cast away any old or outdated dreams. The full moon in Cancer, on the 6th, reveals the needs and pains you may be overcompensating for with your ambitions. On the 13th, the asteroid Juno joins Chiron in your home sign, cutting into old wounds and inspiring a desire to heal — or destroy. That this is a phenomenal year of new beginnings is certain; but you’ll have to go easy at the outset if you want to hit full speed.

The promise of Aquarius season spells out success, with Venus entering your tenth house of career on January 2, trailed by the sun on the 20th and a new moon on the 21st. And though the lights are on in your great palace of ambition, is anyone home? Throughout the month, Venus will clash with Uranus and Saturn, two epochal planets of change, forcing a reckoning between exterior splendor and inner metamorphosis. While the public show rolls without a hitch, it’s up to you to deal with dissociation, insobriety, self-sabotage, and destructive habits. The show will go on. The real work goes on backstage.

On January 12, after two-and-a-half months, Mars finally goes direct in your home sign. Until the gears of propulsive selfhood get rolling at full speed, you’ll need to find a way to unload months of pent-up aggression. Incidentally, Capricorn season awakens the devil in your eighth house of metamorphosis — that domain of power plays, role-reversals, and releases. Let the fire out: Embrace the carnal and interpersonal conflict as healthy, necessary and stimulating. With Mars now direct through March, all experiences are fuel for your explosive momentum.

You’re ready to lead, but can you handle the consequences? In Capricorn, in your seventh house of others, Venus and the sun will meld with Pluto (on January 1 and 18, respectively), activating a purge of dead relationships, and the rise of your inner Morning Star. Speaking of dark majesties, Lilith leaves your home sign on the 13th, entering Leo in your second house of style and self-confidence. You’re on track for a definitive career year, which will require confrontation, collision, and the possibility of cancellation. Don’t fear the villainess narrative; if it means standing up for yourself and recruiting collaborators who trade in authenticity, you should wear your new maleficence proudly.

On January 8, Lilith — the exiled, self-emancipating biblical she-demoness archetype — enters Leo for a ten-month revenge residency. And the timing couldn’t be better. The month starts with Venus entering Aquarius, in your seventh house of public visibility and interactions, followed on the 20th by the sun and a new moon on the 21st. No more compartmentalizing your feelings for the sake of keeping others happy. When the lights come on you this time, bring out the fire, fury, and fearsome elements. You won’t be able to progress in love or on the public stage if you can’t tap into your authentic expression, no matter how much it frightens you. She is risen…and the people in your life better be ready.

For the first half of January, you’ll be stuck in reverse, held in the reserves, and kept from leaping into battle. Until the 12th, Mars is still retrograde in Gemini, in your tenth house of career. Meanwhile, Mercury retrogrades in Capricorn, in your fifth house of creativity, through the 18th. Spend the first two weeks of the month getting in shape, lining up your vision, and revving up for launch. Venus arrives in Pisces on the 26th, in your seventh house of public visibility. Be in the best shape to be seen, adored and carried once she crosses the threshold.

In the latter half of January, Aquarius season reboots your fifth house of creativity, inspiring visions, ideas and constructive collaborations. But this new dawn can only arrive after a long tour through the underworld. Capricorn season goes down in your fourth house of home, roots, family and emotional stability. With Venus and the sun crossing Pluto’s karmic gates (on the first and 18th, respectively) and a Mercury retrograde raging through the 18th, you’re called to focus on unresolved conflicts, broken foundations and old fears about expressing your needs. The Cancer full moon on the sixth ignites your tenth house of career, followed by the Aquarius new moon on the 21st. Embrace the purge; you’ve never been closer to a new beginning.

January’s retrogrades affect your domains of self-expression (Mercury, through the 18th); relationships (Uranus, through the 22nd), and drive (Mars, through the 12th). If you feel blocked, stymied or creatively diffuse, focus your attention on the dwellings, altar, and interior temple. With Venus in Aquarius in your domain of home, you’re called to beautify your living space and bring harmony to your daily life and thought patterns. As the retrogrades unstick from the thaw, you’ll not only have your creative release valves reopened, but a more rooted sense of home and self through which to access them.

What have you learned these past few months about relationships? On January 12, Mars finally goes direct in Gemini, in your seventh house of others, and you cash in on renewed means of discerning and communicating. If you’ve felt out of control in the sexual and interpersonal arenas, you now have a chance at active expression. Take the Cancer new moon on the sixth, in your eighth house of transformation, to delve deeper into intimate territory than ever before. This is a chance at new equality and presence in interpersonal dynamics. It’s yours to claim.

A karmic scale of balance weighs over all of January; with every breakthrough comes a painful release of all that’s come before. As Mercury retrogrades in your home sign through the 18th, and Pluto unleashes the dark sides of Venus (on the first) and the sun (the 18th), you may feel blocked, wrathful, and weighed down by the past. The Cancer full moon, on the sixth, illuminates your seventh house of relationships, giving you outside perspectives to get you out of your head. Focus on your home life, and laminate moments of clarity, peace, and belonging; they’ll get you through a month of intense uncertainty — and momentous growth. The next few years promise a paradigm shift for you. Honor these final underworld journeys as essential to your evolution.

January’s Mercury retrograde stirs up shadows in Capricorn, in your twelfth house of mental health. But with Venus in your home sign for most of the month, you’re called to leave the psychic despair for a moment and get in your body: Imbue your form with a sense of beauty, artistry, and intention, so that you feel stable and rooted on this planet. On the eighth, Lilith arrives in Leo, in your seventh house of relations, forcing you to reckon with the ways you’ve kept yourself small or diffuse for others. As you make yourself over this month, you’re reclaiming what was taken — or given. By the time of Aquarius season on the 20th and the Aquarius new moon on the 21st, you’ll feel reel strong enough to claim your divine stardom.

This month’s big retrogrades scramble your sense of stability and belonging: Mars is stuck in reverse in Gemini, in your fourth house of home and rootedness, through January 12; and Mercury retrogrades in Capricorn, in your eleventh house of community, through the 18th. Until they go direct, you may feel out of place, adrift, and disconnected with the people around you. But with Venus entering your home sign on the 26th, you’re set to be the source, the magnet, the center of your network. You don’t need to go anywhere, or seek anything, to get answers. The real work is feeling safe and strong when you’re by yourself. Make your home and your inner world feel welcoming, and the rest will come to you.

NEXT UP
Astrology
Your February 2023 Horoscope Is A Breath Of Fresh Air
Astrology
February 2023’s Full Snow Moon in Leo Embraces The Real You
Astrology
How to Use Astrology to Access Past Lives
Culture
An Ode To Stripperweb, The Beloved Sex Worker Forum
Style + Culture, delivered straight to your inbox.

This article was originally published on Dec. 27, 2022