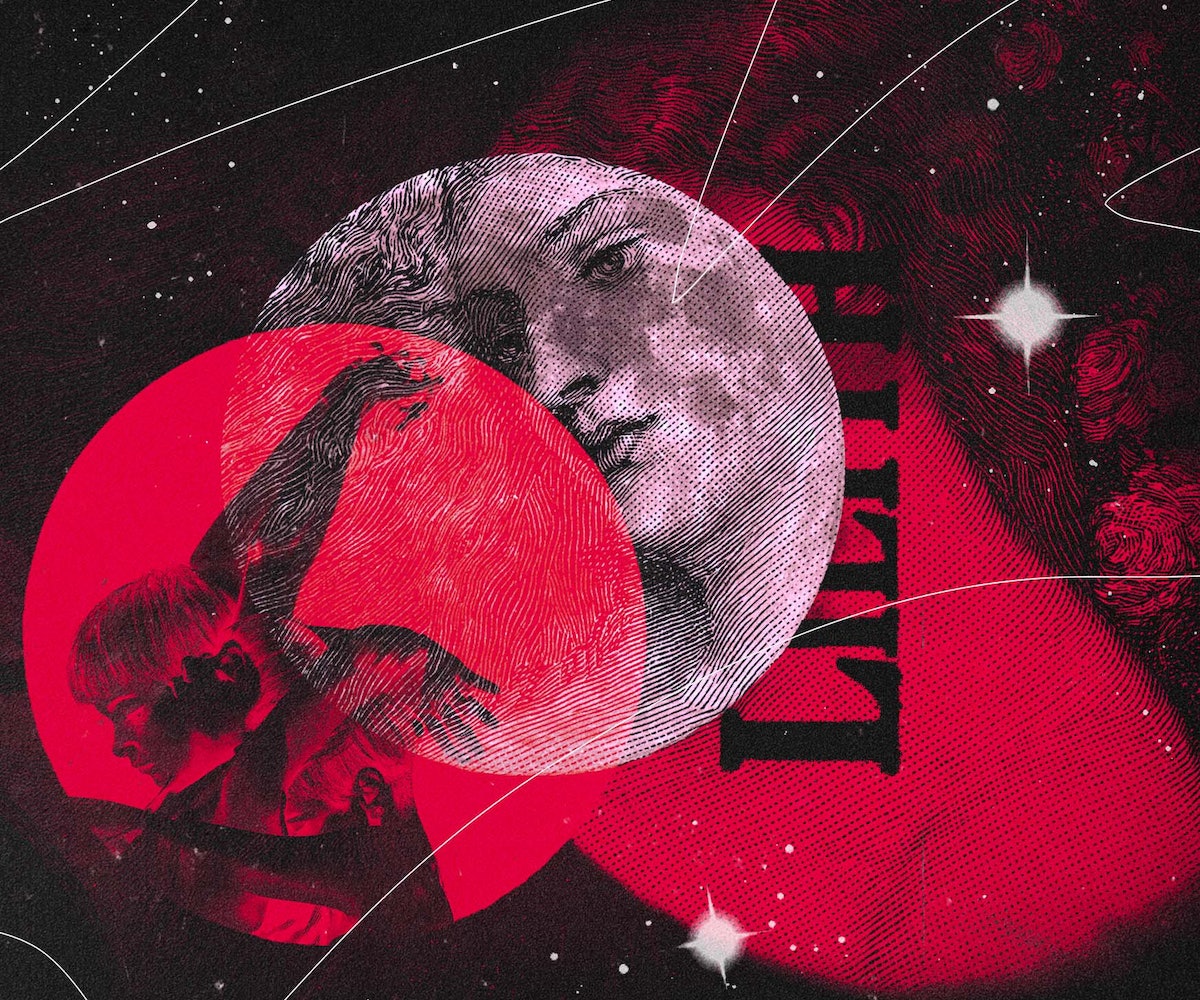 Since the garden of Eden, Lilith has reigned as the supreme demoness of biblical mythology, and in astrology, she vindicates those who have survived gendered oppression, leading to a dark vindication. Astrologers denote Lilith as the farthest point of the moon’s elliptical orbit, when the high feminine is thrust deep into the abyssal void of space. How does Lilith’s affect you and the world around you? And what does her current tour through Cancer — the sign of the mother, the tribe, and collective survival mean? What hell will she raise next? Find out everything you need to know about Lilith’s place in astrology, below.

In The Book of Lilith, Barbara Black Koltov traces the evolution of the shadow queen, starting with the Lilim, storm or wind spirits of Sumeria around the third millennium B.C.E. As Egyptian and Hittite cultures evolved, they would adopt superstitions around a female specter of the night — or Layla — who would take her final form in Israelite mythology as Lilith, literally translated to “wanton night hag,” a ghoul who came by dark to recruit children to her army of demon spawn.

For the religious authority of early Hebrew society, Lilith was essential. Men were warned that she wanted to bring about orgasms and nocturnal emissions, for the sake of fathering her brood; women feared that she would steal their children if not carefully protected. And so, the sanctity of the family unit had to be guarded from temptation and deviant desire: even your dreams were dangerous, if they violated wedlock. Koltov writes that Lilith would come to haunt “wells and latrines,” making her an immortal saint for gay men, cruising public bathrooms in quest of rapture.

The binary of the innocent wife and the prowling seductress would play out in Lilith’s most infamous starring role: Adam’s first mate in the garden of Eden. Of course, canonized scripture only contains blurry mentions of Lilith — whether she was scrubbed from the original story or later introduced is still up for debate — but look to the apocrypha, such as The Alphabet of Ben Sira, and her dark majesty shines supreme.

Lilith and Adam were made of the same clay, equals until a sudden and severe pecking order was introduced by God and his head boy: at the top of the pyramid would rule man, then woman, and the animals below them. For demanding parity and questioning authority, Lilith would be banished from paradise in exile and abjection, the living inverse of God’s moral purity. And though Eve would be made as Adam’s new and docile derivative, Lilith’s influence in Eden would reverberate, with the snake (Scorpio’s avatar) awakening Eve from the delusion of innocence.

Look for Lilith in any of culture and mythology’s great wronged women: the gorgon Lamia, cursed to bear stillborns after mating with Zeus; the vengeful witch Medea, jettisoned by her deadbeat lover Jason; the revenant first wife Frumah-Sarah, in Fiddler on the Roof; Madelyne Pryor, the X-Men’s wrathful Goblin Queen; and the sea-witch Ursula, in The Little Mermaid. James Joyce describes Lilith as “the patron of abortions” in Ulysses. Indeed, wherever abounds the propaganda of blissful matrimony, childrearing, and feminine submission, Lilith won’t be far behind, amassing power in the dark, seeking to reveal the lies of man and God. As the titular witch proclaims in Euripedes’ Medea: “I know indeed what evil I intend to do, but stronger than all my afterthoughts is my fury, fury that brings upon mortals the greatest evils.” May the revenge be rapturous, delicious, and bloody.

If your moon in astrology represents your heritage and sense of belonging, Lilith’s arrival in your chart speaks to those experiences in the shadows. As the moon can only reflect light, but not generate its own, Lilith is described by the Zohar to bear “the resentment of the moon’s diminishment,” and the bitterness of gendered subordination. When was your sexual expression deemed wrong? How were you gaslit into suppressing your voice or natural embodiment? Look to Lilith’s placement in your chart to reclaim those core moments of exile, and to understand how they often play out in relationships, self-conception, and the carnal.

On April 14, Black Moon Lilith entered Cancer, where it unleashes a tempestuous fury through January 2023. Undeterred by storm and sea, and armored by its shell, the crab endures, through millennia, a survivor of eons and ages beyond humanity’s short term on earth. Cancer, ruling the mammary glands, situates the mother as the carrier of history and prehistory, enduring all tempests to pass down the story, culture and dignities of her heritage. Unlike fellow water signs Scorpio and Pisces, which embrace metamorphosis, Cancer retains its water, hanging onto its ancient traditions. In Sexual Personae, Camille Paglia writes of “a chthonian miasma,” which is “woman’s procreative fate, linking her to…Dionysus’ swamp, the fleshy muck of the generative matrix.”

Before Lilith’s early years in ancient Mesopotamia and Egypt, women shared means of contraception and collective care. In The Origins and History of Consciousness, Erich Neumann chronicles how, in pre-patriarchal civilizations, “woman’s primary experience of birth [was] matriarchal. It is not the man who is father to the child: the miracle of procreation springs from God.” The active presence of the male father would be introduced later: think Joseph, the Virgin Mary’s unnecessary appendage, or even Darth Vader, revealed to be Luke’s father only in the sequel of Star Wars.

And so the ability to experience, interface with, and exert individual choice over the primeval power of childbirth belongs to women, and thus represents a fundamental threat to the hierarchy. If women surpass the role of vessels — or victims — to their biology, then they contradict the authority of Adam, and his righteous God. Creative autonomy, once unleashed, is a force which cannot be straightjacketed or institutionalized. It represents an ancient order that renders man dispensable.

Since arriving in Cancer in April, Lilith has revealed how far the state will go to prove its supremacy, and to keep its Eves in blind submission. The optimistic feminism of the 2010s — which sought coalition-building, workplace elevation, and collective justice — feels naive in the bitterness of a new backlash decade. Witch culture is over; vampires are back, and it’s every Slayer for herself. The cruelty of state legislators, media trolls, and even supreme court justices is not meant to inspire some new communal uprising. Lilith finds the platitudes of hope to be unstimulating and untrustworthy. She does not wish to return to Eden, or to fight for its rehabilitation from within. At the sight of God’s flaming sword, Lilith turns to the wilderness and never looks back, vindicated by the truth, freed from damning delusions.

In her New Yorker reporting, Jeannie Suk Gersen traces the complications and compromises at the heart of Roe v. Wade, namely, how the language of privacy used to protect abortion rights is invoked successfully by weapons owners, tech plutocrats, and tax-evading presidents. Lilith’s arrival in Cancer forces a reckoning over freedom, and whether a truly unbound body can return to the panopticon of man’s artificial paradise. Of course, as so-called religious rights are invoked to impose terror and control, Lilith has a laugh. Lawsuits seeking to defend bodily autonomy on religious grounds have been filed, by a synagogue in Florida, and, spectacularly, by the Satanic Temple. Already outcast from the dominant Christian establishment, the outliers have nothing to lose, and nothing to fear.

Though Cancer is often ridiculed for its codependency, its shell can withstand the cruelest devastation. Empathy does not equate to weakness, as embodied by the Cancers Michelle Rodriguez and Lil’ Kim, who wield an armor of authenticity in the face of judgment. The sign of the mother is populated by women who sacrifice their reputations to give more to the world than just a child. Try as the monarchy might to subdue Princess Diana, her style and dignity still reverberate, dethroning Elizabeth in the cultural consciousness. Courtney Love, the bad mommy rockstar, will never conform to appropriate behavior. And Marianne Williamson, debating among corrupt presidential hopefuls, affirmed radical empathy in the face of cynicism.

In fairy tale lore, princesses often find themselves locked away, languishing in the darkest cell of the tallest tower, waiting for the prince’s kiss to restore their freedom. But the hags, crones, and sea witches answer only to their own power. Far beyond the palace walls, unbound by moral propriety, they command the elements and transform into the great dragons and monsters of myth. Paradise can no longer contain you. Let the kingdom burn. Your God is in the desert now.

NEXT UP
Astrology
How to Use Astrology to Access Past Lives
Astrology
February 2023’s Full Snow Moon in Leo Embraces The Real You
Astrology
Your February 2023 Horoscope Is A Breath Of Fresh Air
Culture
An Ode To Stripperweb, The Beloved Sex Worker Forum
Style + Culture, delivered straight to your inbox.