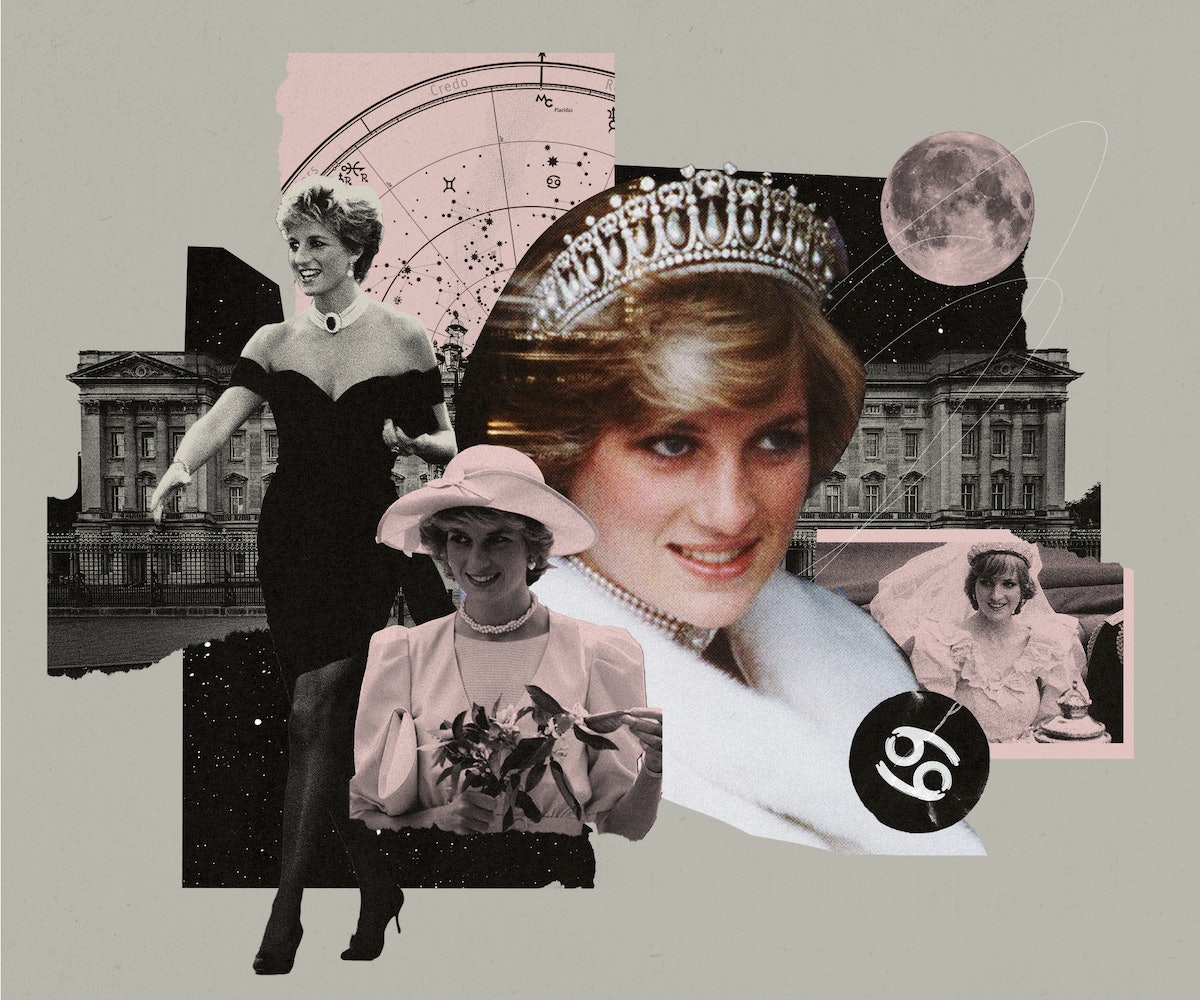 24 years after her tragic passing, Princess Diana is enjoying an unprecedented resurgence. There’s Diana: The Musical enduring a hailstorm of pans on Broadway and on Netflix; Emma Corrin and Elizabeth Debicki claiming the role on The Crown; and Kristen Stewart going all the way in Pablo Larraín’s new film Spencer. Why is Lady Di resonating now?

Since her untimely passing in 1997, the People’s Princess has been a constant fixation for astrologers. How could a life so chosen end so suddenly? What kind of cosmic order would allow for the rising luminary of a new millennium to be taken before her time? Pick up a text on astrology and you’ll likely find some examination of Diana’s chart, and in it, insights into her gifts, her passing, and her ever-reverberating impact. Though her chart contains endless cosmic data about her life and legacy, key astrological archetypes shed light on what set Lady Di apart, her lasting legend, and why a new generation is rediscovering her.

Sagittarius was breaking on the eastern horizon when Diana Spencer was born, making the centaur her rising sign, and the start and end point of her chart. Diana’s point of view, then, was driven by a Sagittarian ethos: To go beyond the limits of tradition and connect with the masses on a higher level; to question, provoke, and inspire; to become the sum of a life of vast experiences.

Sagittarius is ruled by Jupiter, the biggest planet in our system, which synthesizes our lived experiences into wisdom and glory. Diana’s Jupiter took its throne in visionary Aquarius, in her second house of self-worth. But before Jupiter could launch Diana into the world, her chart introduces its opposite: Saturn, the planet of rules and responsibility. In its home sign of Capricorn, Diana’s Saturn represented rulership, governance, and old-school approaches to power.

That Diana would live an untraditional life was certain with Jupiter leading the charge, but Saturn gives great insight into how she so successfully stuck the landing. Diana’s breeding and upbringing made her a fetching candidate for the royal family, and her ability to code switch in the language of aristocracy gave her the appeal of a classic princess. The Capricorn influence would force Diana to grow up fast, allow her entrance into the gates of power, and then her more revolutionary planets — like Jupiter and the moon in Aquarius — could plant the seeds of global reinvention from within.

Born in 1961 when Saturn was in Capricorn, the planet returned to its home sign from 1988–1991, initiating Diana’s first and only Saturn return. A Saturn return in Capricorn spells out conflict with power and authority, and as Diana struggled in her marriage with Prince Charles (and his family), a new generation would be born in the wake of the Berlin Wall’s fall. Thirty years later, from 2017–2020, Saturn would be back in Capricorn, bringing to a head conflicts of state-sanctioned abuse, policing, and corruption. This period would have been Diana’s second Saturn return, when she could have instructed the next generation on how to reconcile with the monoliths of our day, and perhaps, how power can be used for good.

Diana’s sun, her source of light and vitality, and Mercury, vessel of action and communication, rule from Cancer, in her seventh house of intimate partnership. For Diana, marriage was a portal to a higher threshold, a literal throne from which she could radiate. Meanwhile, in the fifth house of motherhood, the high femme Venus rules in the sign of fertility, Taurus. Diana’s planets were assembled for the throne of Queen Mother.

Cancer is ruled by the moon, our invisible inner compass, which Diana carried in Aquarius, in her second house of self-worth. An Aquarius moon incorporates originality and vision into every aspect of life. Their revolutionary instincts often register subtly, as if the water bearer were returning collective consciousness to the ocean drop by drop, to reverberate through time and space. Diana’s moon repositioned her supreme maternal role with a new Aquarian relevance, which could modernize her position for a changing culture.

But how could independent, authentic motherhood coexist within the monarchy? Diana’s individualistic moon was opposed, or challenged, at 180 degrees, by a cluster of planets in her eighth house of family legacy and power dynamics. Every move Diana made — like insisting on taking her children to school, or personally selecting their clothing — would come into conflict with the order of her very public in-laws. Diana’s eighth house was occupied by Leo and Virgo, two signs concerned with the roles we are assigned to play in life. With the infernal, explosive planets Pluto, Mars, and Uranus in her eighth house, Diana was set on a course for constant rebellion against the royal family.

Incidentally, Lady Diana and Queen Elizabeth share many similarities in their charts — they are both born with Jupiter in Aquarius and Lilith in Leo, with cataclysmic “events” going down on the axis. But one point of divergence is in Taurus, where Elizabeth has her sun and Diana has her Venus. Outliving and outlasting just about every ruler of the last century to become the longest-serving female head of state in history, Elizabeth has successfully channeled Taurus’ consistency and longevity to endure as the supreme Lux Gloriana. And yet, Diana’s Venus, luxuriating in the fifth house of motherhood and creative expression, can’t be topped. She had the glamour.

In his book Rulers of The Horoscope, Alan Oken points to Diana’s Venus as the eruption point of her financial issues. With her Venus caught between her Aquarius moon, in her second house of personal wealth, and disruptive, rebellious Uranus in Leo, in the eighth house of family wealth and taxation, Diana often struggled with “spending of her husband’s and public tax money to support her wardrobe,” which “led to much criticism and controversy.” Like many of the more challenging astrological combinations, this face-off led to great growth, with Oken noting that Diana’s spending, especially in the instances of her iconic fashion, could be aligned to “greater spiritual and social awareness.” Just months before her passing in 1997, Diana auctioned off 79 of her gowns, raising $3.25 million for cancer and AIDS causes.

AQUARIUS: SHE IS THE MOMENT

Queen Elizabeth and Princess Diana were both born with Jupiter in Aquarius, and for both women, the planet of expansion would set the stage for a grand ascent in the public eye, making them living symbols for an emerging modernity. Jupiter in Aquarius makes change exciting. (Not so incidentally, Jupiter has been in Aquarius for the better part of 2021, widening the reach of new technologies, vaccines, and youth movements.) Whenever the water bearer comes into focus, so does its opposite, Leo, the sign of self-expression and star power. If Aquarius is the movement, Leo is the moment, the face of the revolution. Like Britney Spears, Lady Di was born with her moon in Aquarius, and lives reveal the limits of the social orders which tried to defy them. Can fame serve a higher purpose?

The great showdown of Diana’s chart (and, incidentally, Elizabeth’s) fell on the Leo-Aquarius axis, where Diana would have to compromise her Aquarian freedom to play the role of a lifetime on Leo’s grand stage. As the UK suffered internal unrest, Diana was able to wield her celebrity to Leo’s highest vibrations: regality, generosity, and dignity. Through the drama and upheaval (not helped by Diana’s Uranus stirring the sh*t in Leo), Diana revitalized the belief that royals could act as symbols of our best selves.

When the power of the people is at stake, all stars must fall: Diana passed with Jupiter back in Aquarius. Right now, the activation of planets in Aquarius is leading us to question our Leonine drives: If you’re to seek fame, what is your ethos? And, from Leo’s point of view, if you’re going to embrace the so-called right side of history, how where’s your human touch?

Diana’s chart reveals a life of struggle and reconciliation with power. Her Aquarius moon was not meant to overthrow the system, but to plant seeds for its future reclamation. Only by enacting grace through her choices, down to the very clothes she wore, could Diana live in the possibility of a higher self-realization. How will you put your role to purpose?