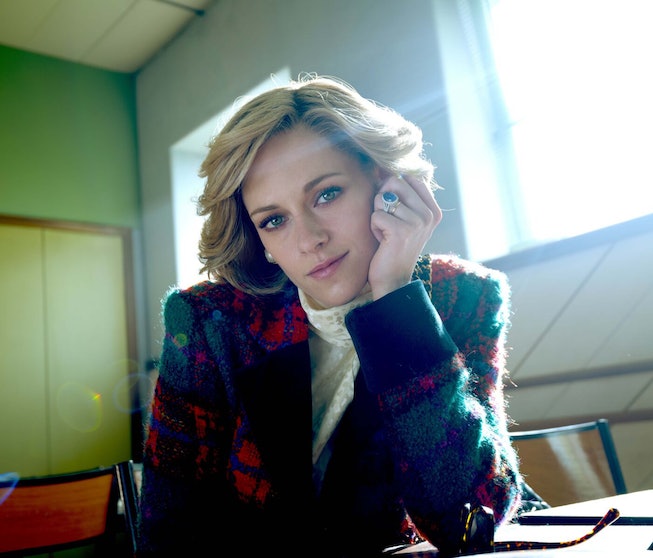 The story of Princess Diana has always been one of reexamination, a constant reassessment of who she was and what she represented. Aided by hindsight, we now know that “The People’s Princess” lived a hard life — hers was not a story of love, but rather one of abject horror. Her marriage to Prince Charles was a woeful mismatch from the start; his heart had always been pledged to another, and poor Diana would never live up to the impossibly high standards that had already been set. For much of her adult life, Diana would live unhappily — and when all was said and done, the young Princess would die tragically, a victim to an uncaring system.

Earlier this year, Emma Corrin won a Golden Globe for her portrayal of Diana in Netflix’s The Crown. Following a familiar script, Corrin played Diana as a delicate flower — innocent and childlike, young and impressionable, wide-eyed and easily fascinated with the trappings of royal life. But she was also out of her element, and as the story goes, Diana’s fairytale with Prince Charles would soon sour into a nightmare. The once perfect dinner guest who passed The Balmoral Test with flying colors was now constantly making a fool of herself, and the Prince of Wales didn’t seem to care one way or another. Yet throughout it all, Corrin imbued her Diana with a sense of impenetrable hope — a silly belief that she could somehow make this partnership work, even if only through sheer force of will. When the Princess, desperate to save her crumbling marriage, tried to impress Charles with a recorded tape of her performing a number from The Phantom of the Opera, it’s hard not to laugh at her naïveté. She just doesn’t get it. And perhaps, she never will.

In contrast, Spencer, a new biopic (if it can be called that) by Pablo Larraín, seems determined to add a new layer to this figure we all think we know, to complicate the already complex narrative of a woman we’ll perhaps never truly understand. In star Kristen Stewart’s hands, Princess Diana is neither naive nor hopeful. She is no longer fascinated by the allure of royalty. In fact, she’s downright disillusioned. Larraín forces viewers to live inside Diana’s head throughout the film; he colors Spencer with a sinister hue, painting the royals as insidious figures.

Much like Jackie, the Natalie Portman-starring Jacqueline Kennedy biopic Larraín directed five years ago, Spencer focuses on just a small amount of time, taking place over a single weekend: Christmas in 1991. And while the truncated timeline leaves less space to track Diana’s gradual disillusionment with her new life, the film ultimately benefits by only showing us a Diana who’s already fed up, already over it all. Her relationship with Charles is already unnervingly hostile. Her bulimia, the physical manifestation of her ever-present anxiety, is already at its worst.

Of course, none of these qualities make the Diana of Spencer exactly new. We already knew that the Princess was sad and that the royal family sucked. But Spencer gives Diana a new dimension: an unstable sense of agency, though it’s couched in a story about one woman’s lack of it. Spencer doesn’t imply that Diana had any real control in the matters of her life, but it does introduce us to a Princess who’s willing to cling to anything resembling it anyway.

Much of this is owed to Stewart, whose decisions for Diana are fascinating. She’s at once steely but also fragile. The actress is an expert at drawing out Diana’s outsider-isms, each character choice carefully selected to better highlight the stark contrast between Diana’s freewheeling “normalcy” and her royal in-laws’ obsessive stuffiness. But most interestingly, she gives Diana brief moments of self-satisfaction. The film opens with her nervously running late to the holiday festivities, but the way Stewart explains away her tardiness with a sly, “Just thought I’d drive [myself],” belies a certain smugness, almost as if the Princess delighted in her ability to shake things up, however slightly. In one of the film’s most directly comedic moments, she dismisses an unwanted bedroom visitor by saying, “Now leave me. I wish to masturbate.”

The dominant narrative has always treated Diana as a victim, and Spencer plays into this. But it also shows a woman desperate to fight back, refusing to resign herself to an inevitable fate. In certain moments, it could be argued that Diana is descending into madness — she speaks with ghosts, imagines people who aren’t there — but viewed from different angles, those same moments are also indicative of Diana’s insistence on resistance. Rather than accept the reality of her present circumstances, Diana invents new worlds for herself to escape to. That would certainly explain the film’s fondness for tracking shots, which follow behind Diana as she runs — down hallways, through corridors, across courtyards and fields of grass. The effect is dizzying, positioning Diana as a girl constantly on the go, always moving towards something else. Why else would she spend large swaths of her nights wandering off the Sandringham Estate premises, sprinting towards barbed-wire fences, screaming about wanting to “go home?”

Not everything about Spencer works. Larraín and screenwriter Steven Knight make plenty of questionable choices, none more inexplicable than the Anne Boleyn obsession they give their protagonist. Presumably an attempt at drawing a parallel between the two doomed royal figures, the link ultimately rings hollow. Diana’s preoccupation with a scarecrow — and the red jacket it wears — fares slightly better: as a symbol of home, family, and the easygoing past life she abandoned, it resonates as a motif. Nevertheless, the moment in which she abandons her royal garments to sport the shabby red jacket isn’t as climatic as it was maybe meant to be.

It’s not a stretch to say we’re currently in a period of Princess Diana Overload. In addition to The Crown and Spencer, Netflix released its critically-maligned recording of the new Broadway musical Diana just a month before the musical began previews on Broadway. But none of these projects do what Spencer does — dare to add a new wrinkle to the fabric of Diana’s lore.

One could easily argue that Larraín’s stylistic choices render Spencer useless as an actual dispenser of factual information. It’s an argument all too similar to the one about Kristen Stewart not actually looking like the Princess (even with the hair, makeup, and meticulously-styled Chanel outfits). But maybe that’s all for the better. Watching this actress put her own spin on such a storied figure is transfixing, making for a cinematic experience that is not only appropriately disorienting but also refreshingly challenging. Spencer never postures as anything other than pure auteur cinema, and, in some ways, it’s this precise uncanniness that lets us consider Diana in a slightly different light, seeing a version of her that we hadn’t before.

That being said, I suffer with the ending of Spencer, which feels oddly hopeful as it follows Diana and her two sons on an impromptu escape trip to KFC, where they’ll excitedly devour a bucket of chicken wings while looking out at the great British expanse in front of them. Knowing how Diana’s story actually ends, it’s hard to share in that brief moment of respite. But in a world where the legend of Diana is constantly evolving, even as the basic tenets of her story remain the same, it’s perhaps fitting that we land in a space that feels foreign. The former Princess of Wales has always been a complex figure — why shouldn’t we be forced to reckon with that?

Spencer is in theaters now.