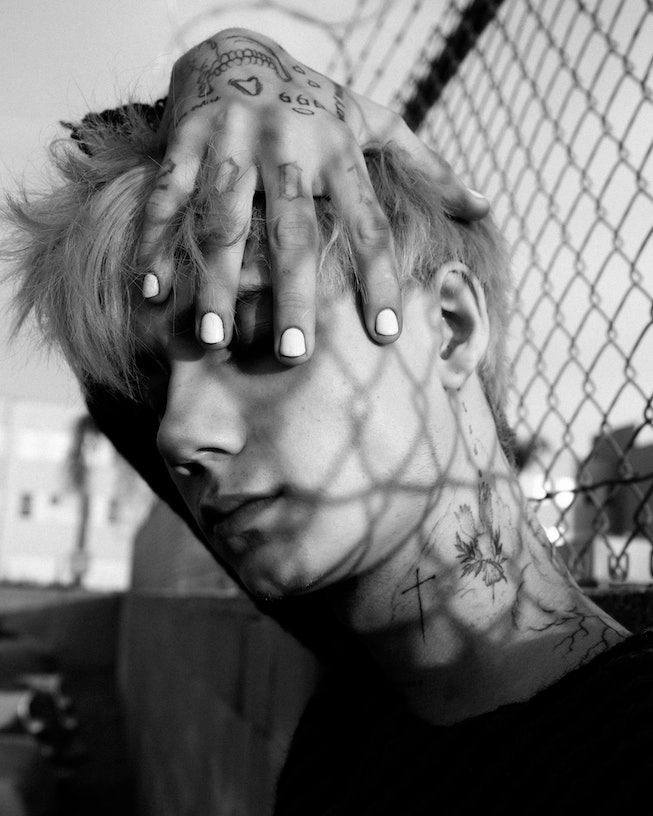 Pop-punk is back: Avril Lavigne is not only on TikTok but also featured on a song on Willow’s upcoming pop-punk album; black and red plaid skirts are once again ubiquitous; All Time Low is going viral on TikTok; people can’t get enough of Olivia Rodrigo’s Paramore-reminiscent “good 4 u,” and, well, Machine Gun Kelly made Tickets to My Downfall.

The resurgence is a product of the 20-year trend cycle as much as it is that classic pop-punk songs are being given new life by a younger generation just discovering them on TikTok. There’s also the sudden ubiquity of Travis Barker, who has become a kind of Jack Antonoff of pop-punk music — he’s the genre’s most-sought after collaborator, working with Willow Smith, Trippie Redd, Lil Huddy, and Machine Gun Kelly. (If you needed any more proof of pop-punk’s cementation into the mainstream, Barker is even dating a Kardashian.)

If Barker is the sorcerer of pop-punk, conjuring the return of straightened locks and fuzzy, two-chord choruses, then Jxdn is its prince. The first signee to Barker’s label DTA Records, Jxdn, or Jaden Hossler, is a Gen Z ambassador for the genre, bringing pop-punk to a generation who missed the heyday of Warped Tour.

His debut album Tell Me About Tomorrow, produced and co-written by Barker and out July 2, is a collection of earworm pop-punk with propulsive rock guitars and sludgy vocals with pop-punk’s quintessential suburban emo cadence. The track “Wanna Be” features Machine Gun Kelly, who Hossler will be on tour with starting next month. It’s an album that both cements Hossler’s place in the current pop-punk revival — and shows that he’s only getting started.

Hossler spoke with NYLON over the phone from his “cribbo” in Los Angeles ahead of his upcoming album about why the culture is so fertile for a pop-punk resurgence right now and how he sees Barker as a father figure.

Tell Me About Tomorrow arrives July 2 via DTA Records.

Why do you think pop-punk is having a revival right now?

I think especially after a year of being told what to do and what you can’t do, punk is a really fun and easy way to sit in a place where you’re doing stuff for yourself, finally. Punk is all about being who you are. It doesn’t matter what you are, who you are, or where you come from, as long as you like the music. That’s what it’s all about, and what it’s always been about. I just personally started listening to punk music two years ago, and it resonated a lot with me. I think this new wave of punk is really just a new generation ready to stick it to the f*cking man, you know what I mean? I think it’s a Rage Against The Machine moment for sure and I think people are ready to just be themselves.

Who are some of those artists who have been influential for you?

I started making music because of a Juice WRLD concert. People will say what they want; he is obviously one of the greatest hip hop artists of all time, but he called himself a rockstar at the time and he loved punk music. He actually has a song with Blink [182]. I don’t know if it will ever come out. The way he structures his songs is super punk-like, everything down to his attitude, too.

But aside from that, that was the beginning of my journey. That’s when I first started making music and I was kind of naive to everything. Now my favorite band is the Descendents, and half of the world doesn’t even know who the Descendents are, but they are, like, the foundation of punk. And then Rancid, and you have bands like Screeching Weasel. Those are the bands I listen to right now. Do I get all my inspiration from them? No, but I'm in my own punk phase. I feel like a little punk kid. I’m figuring out new bands left and right and I’m falling in love with them all over again. For the album, I feel like it’s the perfect combination of Blink [182] and Taking Back Sunday. If they had a baby and that baby made music, that’s what my album would be.

What’s it been like working with Travis Barker and having him as a mentor?

It’s kind of like getting an Olympian who’s good at the sport that you’re working on to come and show you how to actually do it correctly. He’s so much more than just a hard worker in music. He’s such a good dude. People don’t really understand that side of it. He’s just such a good guy and because of that, that makes his work that much better. He cares about things that matter. I’ve had a lot of trouble with my family and he’s honestly stepped in in a really cool way as a father figure for me. He gives me a lot of insight, he gives me a lot of wisdom. He makes me feel like I’m accepted and he actually does love me. I’m forever grateful to Travis. I don’t think there’s anything I can do to repay him, but giving him my life is a start. I owe Travis everything.

Why did you choose Travis Barker’s label over other labels that were interested?

When I released “Comatose,” I was not expecting to really talk to anybody. I’m an independent artist. I didn’t think many people would be interested in signing me, and then we get a call from Travis Barker the day after I release my song and he’s like, “Yo I’m interested in this kid,” so of course every label in the nation’s going to say they’re interested as well, because he’s a good indicator that they should be f*cking with me. But it was cool in itself having one person say, “You’re worth it,” and then 12 other organizations say, “Oh, he’s worth it now.”

After I met with him, it felt so natural. It was something I couldn’t fight. It almost felt like it would be harder to say no because I met everyone and then I met with him, and it was such a distinct difference. I felt so at home and, honestly, the man has a fire ass vegan restaurant and I was taken aback by that. I was like, “Damn.” It was just the right moment for me and I’m so glad it happened the way that it did because I know I made the best decision of my life right there.

What is it like to work with Machine Gun Kelly? Do you consider him a mentor?

Absolutely — it feels like every time me and Kels have a moment together on our own it’s some deep ass conversation, which I love, because that’s what real sh*t is about. It gives a good reflection of what our music is: We’re talking about real sh*t, we’re talking about stuff that both of us go through, and on top of that he’s a really good mentor on the [topic] of never settling. He’s very much a perfectionist and he works very hard and shows me what I need to do to break the mold and break out of what people are going to say about me and him. People try to come for both of us, so it’s cool to see how he gives me advice on sh*t he’s been through. It’s just really respectable.

Your video for “Think About Me” feels very 2000s pop-punk-influenced aesthetically. Can you tell me a little more about how that aesthetic speaks to you?

These last two videos that I’ve made were really the first time in the past year, and in my whole artistry, that I’ve felt comfortable. I’ve definitely made good music, but I’ve still been trying to figure out who I am, and this album has done a lot for me. It’s been very therapeutic. After I was able to make the video for “Think About Me” and being able to be in these colors: green, yellow, and pink and being able to express myself in a way that’s different. I’ve been super aggressive and dark for the past year of my music and although I’ve been through a lot of dark and aggressive sh*t, I’m a happy human being and I have joy to spread to the world. I wanted to show people that even though I got sad, I’m still smiling. This next video with [Kelly], “Wanna Be,” I was super cohesive in the aesthetic and I’m really excited for people to see it.

I read that you’ve struggled with some depression and music has been something that’s helped you with that — can you talk more about that? What is it about pop-punk and rock that you’re drawn to or that feels cathartic?

Anyone who knows anything about pop-punk is — it’s kind of like the breakup letter from the audience, which is like people who are punk, to their parents. That’s how I see it. It doesn’t even have to be from the parents, it could just be from the person who is singing the song to anyone they’re thinking of. It’s super powerful. It’s the first time anyone could ever really be vulnerable in music as much as they have been. You have teens talking about sex, drugs, and sh*t they’re going through. They’re talking about being losers and stuff that nobody wants to talk about because it’s “not cool.” It gave people with no place, a place, and I think that’s why I resonate with it so much. I’ve felt that way my whole life. I found pop-punk and it just sits with me so well that I can’t get enough of it. I owe to myself, the fans, and the audience to be as vulnerable as possible, because that’s what everyone did for years and years.

What is your favorite song on the album?

It’s between “Tell Me About Tomorrow” and “Wasted Year,” just because “Wasted Year” is such a good interpolation. It makes me so excited because I love listening to Blink [182’s] songs and hearing it, it’s like, “Damn, I’m listening to a Blink song.” I really do think it matched the energy really well. “Tell Me About Tomorrow” will always be my favorite because it’s the premise of the album and it’s the only one that tells an exact story, and I’m really excited for people to hear it.