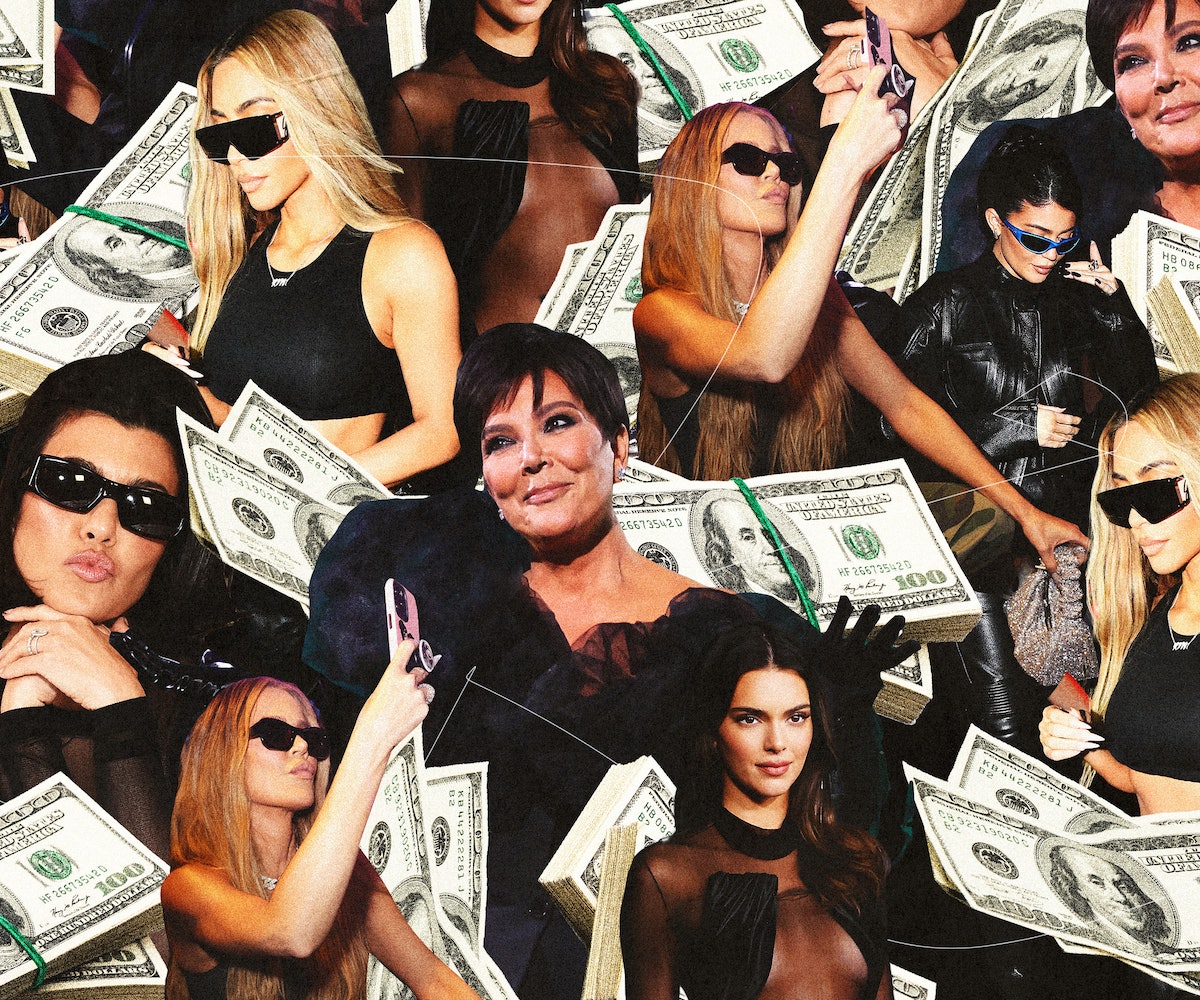 “Don’t touch a thing in there! I know you have the money to pay for it, but that’s besides the point!” Kim Kardashian yells to Kylie Jenner on the most recent season of the family’s Hulu series The Kardashians. She’s referring to the Ripley’s Believe It Or Not display of Marilyn Monroe’s personal belongings that had been transported to Kim’s New York City hotel room on the day of the Met Gala. It’s safe to say they’re worth millions, and yes, Kylie has the money to pay for them.

Unless we’re talking about Kim’s design aesthetic, when it comes to the Kardashians, more is more. More planes, more cars, more kids, more products no one I know has ever bought yet have made two of them billionaires (temporarily, at least). So it’s no surprise that this family of hustlers would never be content with revenues from their businesses and Hulu contracts alone. As far as net worths, the number varies between family members and ranges from Kim at $1.8 billion, Kylie at $600 million and Kendall reportedly at $40-45 million. While these numbers are impressive, the family maintains an insatiable desire to capitalize. Of course, the family has its well-publicized business ventures: Skims and Good American, as well as their beauty lines like SKKN and Kylie Cosmetics are reportedly thriving. But even with their now extreme wealth, the Kardashian-Jenner businesswomen have some bizarre ways to make sure the money keeps coming in.

“I added new items from my closet!” Kylie Jenner posted on her Instagram Story earlier this year with a link to a website called Kardashian Kloset. The post featured a screen-recorded video scrolling through photographed items listed for sale, one of which was an alligator Birkin bag listed at $65,000. Kylie received backlash for promoting it as most of her followers would not be able to afford it, however, what should be more shocking is that the family sells their own personal items on their “official resale site” for profit. Kardashian Kloset launched in 2019 and is run by Robert Kardashian Sr.’s cousin Cici Bussey who is often featured on the show. Each of the girls, including Kris, has their own collection on the site so fans can browse items like handbags, dresses, shoes and Kris Jenner’s $450 bra and panty set. Is this a normal way to clean out their closets? Maybe. But does a billionaire need to be pocketing $500 for a designer t-shirt? Don’t they get most of this stuff for free?

Kim’s collection features many “rare” Balenciaga pieces, the brand which she has been an ambassador for. Khloe came under fire when designer Christian Cowan saw one of the runway pieces he’d lent the media personality in her Kardashian Kloset collection. The site doesn’t sit well with much of the public. “Kardashian Kloset charity” is a suggested Google search (likely from the assumption that the family is donating the revenue) and some items have been reportedly sold for nine times their retail value. Sustainability is a goal of the site, as well as to “share a part of the Kardashian Jenner family lifestyle.” Reselling has always been a cornerstone of the family business. It goes as far back as Kim buying five pairs of designer boots on her father’s credit card and selling them on eBay for more than triple what she paid and, of course, the original family business DASH boutique. Even in the face of criticism, these businesswomen keep the sales coming in, with no returns, refunds, cancellations, or exchanges.

Kim Kardashian: Hollywood is a role playing game that simulates becoming famous. Through photo shoots, publicity stunts, and tasks delegated by “Kim” herself, you gain fans, make money, get new outfits, and when you run out of “energy” to continue on your journey to fame, you can buy more through one of the many opportunities for in-app purchases. Conceptually, it’s genius. This is the experience nearly all Kardashian fans fantasize about: becoming friends with Kim, “traveling” to chic, exclusive destinations, and rising to extreme fame…essentially mimicking her life. When searching the game on Google, some frequently asked questions are, “Can you marry Cassio in Kim Kardashian: Hollywood?” (No, he will only flirt with you) “Can you have a baby in Kim Kardashian: Hollywood?” (You must reach Level 9 and own a home) and “Why is the bedroom door locked?” (For when you have the baby).

The game was Kim’s first major venture and one of her first huge payouts. While game developer Glu Mobile doesn’t release how much they pay celebrities, Forbes estimates that she received close to $22 million between June 2014 and June 2015 from the game alone, which landed her on their cover. By 2016, she’d allegedly pocketed $45 million. This comes after a tongue in cheek 2016 tweet saying she made $80 million from the video game, which Forbes believed to be inflated. Aside from the app’s loyal users, most had forgotten about Kim Kardashian: Hollywood when Kim took to her Instagram Story in October. She posted a short, casual video, seemingly from her bedroom, promoting the game and the newly released virtual Halloween costumes available for your character. To many (me), this was startling, but ultimately, it should never have been. If Kim is still receiving the Forbes estimated 45% of the game’s profits, she is likely still making millions from it to this day.

The Church of Kris

In 2009, Kris Jenner co-founded California Community Church, formerly called Life Change Community Church. It’s a “Christ-centric” church in Agoura Hills that encourages the public to “bring your mess.” “No perfect people allowed!” Fans may know that the family generally goes to Hillsong or, formerly, Ye’s Sunday Service. They talk about religion and pray openly on the show, but many people believe this is just another one of the many family businesses – and a potential tax haven. Kim gives the traditional 10% of her income as a tithing to the church, which could be lessening her taxable income while also handing Kris money directly. Kim also made the church the beneficiary of her eBay charity auctions, with the church pocketing over $60,000 between 2012 and 2013. Churches are usually exempt from taxes, but in 2016, CCC found itself in a tax scandal with liens for unpaid taxes. While it’s unclear what the money is going to, members are required to pay a $1,000 monthly membership fee, as well as the 10% tithing, coincidentally the same percentage the Momager takes…

The KarJenners have always used sponsored content as a reliable revenue stream. There is, however, a specific type of sponcon that usually features one of the family members surrounded by luxury items asking who wants to win them and almost always, Kourtney’s former partner Scott Disick is involved. To enter, a hopeful contestant goes to Disick’s Instagram and follows all of the brands he is following. According to a viral Tiktok, each of these brands is paying $25,000 for their involvement, therefore giving $1.8 million to the pair who posted and likely the company who hosts these giveaways, Curated Businesses. In September, a $40 million lawsuit was filed against Kim and Disick for a lottery that included a trip to Beverly Hills, some expensive items, $100,000 and the chance to “shop like Kim.” Winners were announced, but plaintiffs claim the lottery was a front for Curated Businesses to sell personal information to advertisers. Those who entered were allegedly inundated with ads and unsolicited content from hundreds of advertisers. Nevertheless, in November, Khloe posted a giveaway partnership with Savvy Giveaways for a Nursery valued at $10,000. Considering her sister’s recent legal troubles, it could be seen as a huge risk…but if you’d built a multi-million dollar empire, what would you do to keep it?