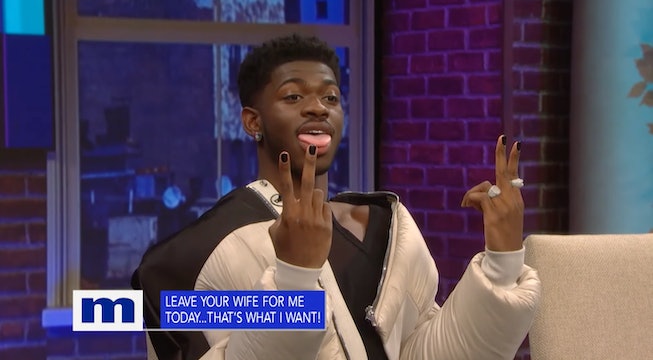 No one is doing it like Lil Nas X. As a master internet troll and true visionary, he has yet to miss even once when it comes to playing the music industry game. His promotion for his record Montero put his parody chops and love of tangled tabloid culture on full display; he’s had a People-inspired pregnancy photoshoot and a fake daytime talk show, but his greatest work yet might be his fictionalized Maury episode.

As a show synonymous with total, unadulterated mess, Lil Nas X’s Maury episode does not disappoint and finds him in one of the series’ classic categories: a love triangle. The episode hits all the core tenets of Maury canon; there’s a paternity test, bouquets and chairs thrown to the ground, a lie-detector test comes with a big reveal, and someone ends up running through the studio halls in a state of distress.

The full-length Maury episode is actually a follow-up to his “That’s What I Want Video,” which is, simply put, genius marketing. It picks up right where the music video left off: Montero is heartbroken to discover that his football teammate-turned-lover, Yai, has been leading a double life with a wife and child. What’s a man in love for a whole one and a half months to do? Situations this sticky can only be solved by an unbiased third party. Enter, Maury Povich!

While Maury tries to get the timeline straight, a very petty Montero does what very petty people do best: stirs the damn pot every chance he gets. He antagonizes Yai’s wife, Ashley, by forgetting her name, shamelessly making out with her man in front of her, and doubling down on his theory (that he may or may not have spearheaded) that she cheated on Yai and that that their baby isn’t even his. Love triangle chaos always makes for great television, and Montero’s chyron continuously reads, “Leave your wife for me today...that’s what I want!” Ashley is hysterical, Yai is torn between the fork in the road, Montero is ready to start his new life with his man, and I am fully obsessed.

Which Hollywood executive will be brave enough to make a single fresh decision and give Lil Nas X his own variety show? If his album promotion is this good, just imagine the God-tier level of trolling he has up his sleeve for his other creative endeavors. Until Hollywood gets its act together, watch Lil Nas X’s full Maury episode, below.