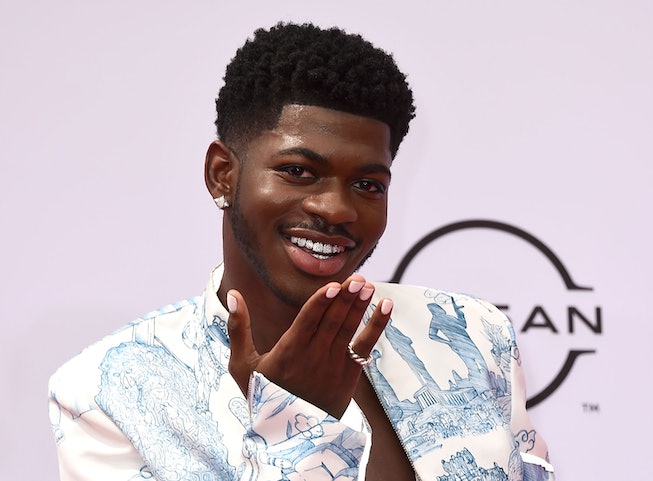 Lil Nas X is one of the most legendary multi-hyphenates of our time: rapper, singer, and hall-of-fame sh*tposter. While other artists need a public relations team to help manufacture a personality, Lil Nas X is at the helm of his ship and his phone, cementing himself as a visionary artist and a master troll. Below, we’ve gathered some of his most profound trolling moments, because you might as well learn from the best.

Lil Nas X famously burst onto the music scene back in 2019 thanks to the wild success of his highly-memed breakthrough single, “Old Town Road.” The song initially blew up on TikTok, and due to his rigorous training as the admin of a Barb Twitter account — a fervent Nicki Minaj fan for the uninitiated — Lil Nas X was uniquely qualified to meme the hell out of his song without it ever feeling forced, or worse, completely unfunny.

“I knew the way I was going to have to push the song to get it to hit more people’s ears,” he said to Rolling Stone in an April 2019 interview. “I run a meme type of account on Twitter; I know what my audience is looking for. So I put some potentially funny lines in there.”

His foresight was right and the resulting come-up was undeniable. “Old Town Road” went from an independent release on soundcloud to being the fastest song to gain diamond certification, sell over 18 million records worldwide, and win two Grammys.

Lil Nas X took his trolling from URL to IRL with the arrival his “Satan Shoes.” Made in collaboration with the Brooklyn-based art collective, MSCHF, the shoes were perfectly engineered to send Christians into hysterics. The modified Nike Air Max 97s were decorated with a pentagram pendant, included a drop of human blood in the sole, and a reference to Luke 10:18, a Bible verse about Satan's fall from heaven. The final perfect touch: Only 666 pairs were made.

Interestingly enough, MSCHF previously sold a similar shoe in 2019, the now sold-out Jesus sneakers, which were also modified Nike’s Air Max 97s, but Nike had nothing to say then. In the name of the Lord, we rebuke the haters! Or sampling their rants in a song, at least.

Humorless Nike immediately lawyered up after the release of the “Satan Shoes,” and although Lil Nas X wasn’t named in the copyright infringement lawsuit, he did not miss an opportunity to amp up the trolling. He dropped a fake apology video on YouTube, which opens with the rapper holding the satanic kicks, and to the untrained eye, even looking a bit remorseful.

The video begins with Lil Nas X saying, “Okay guys, I see everybody’s been talking about this shoe and I just want to come forward and say...” only to immediately cut to a scene from his “MONTERO (Call Me By Your Name)” music video in which he seduces Lucifer himself with a world-class lap dance. It’s also marked as “inappropriate for some users” which only makes the troll even more hilarious. The haters are absolutely sick.

An “Industry Baby” Behind Bars

In a genius-level troll, Lil Nas X spun his jokes about going to jail into promotion for his new single, “Industry Baby.”

The music video’s trailer, titled “Nike v. Lil Nas X – Satan Shoes Trial,” depicts a fantasy court trial which features Lil Nas X wearing his Eddie Murphy hat as plays himself along with other judicial roles: a judge, a defense attorney, a juror, and a prosecutor. The trial begins with the shoes, but suddenly pivots to Lil Nas X’s sexuality. The lawyer asks, “Let me rephrase the question: Do your momma know you gay?” Lil Nas X says, “Yes.” The audience is scandalized and the juror says, “Yeah, lock him and throw away the key.” The judge hands over the verdict: five years in Montero State Prison.

The official music video picks up right where the trailer left off as Lil Nas X finds his footing in prison. He throws ass in the shower, wears a hot pink prison uniform, and eventually initiates a mass breakout with the help of fellow inmate Jack Harlow. Of course, Lil Nas X added an extra trolling into the mix, dropping an “uncensored” version of the video that freezes right before he and his backup dancers start throwing it back in the prison shower. There’s levels to this sh*t!

Homophobes Can Get Bent

It takes very intense level of stupidity to go after a master troll, but rapper Boosie Badazz proved he was up for the challenge when he went on an Instagram Live diatribe defending DaBaby’s homophobic Rolling Loud rant and dragging Lil Nas X into the mix. Boosie called Lil Nas X “the most disrespectful motherfucker in the world” and also threatened to “beat his ass” if he performed “Industry Baby” naked at the VMAs.

Lil Nas X, always 10 steps ahead, used the attack for his own promotion. “I usually don’t respond to negativity from my peers,” he wrote on Twitter. “But this had to be said.” In case you haven’t been reading this article closely, the attached link obviously had nothing to do with Boosie; it was a link to his “Industry Baby” video. You really have to laugh.