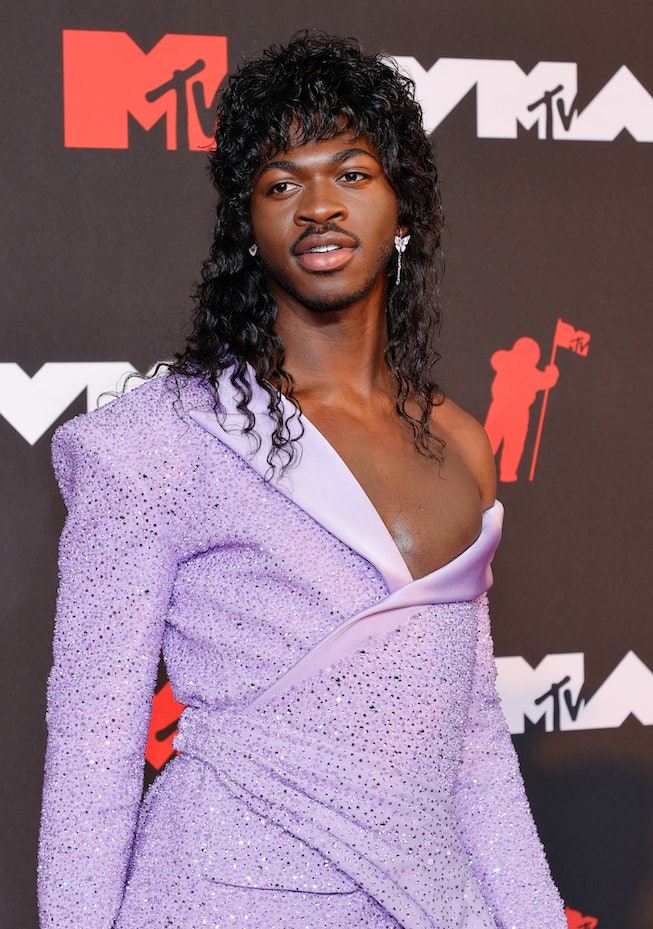 Lil Nas X has been on a roll this year. From twerking on the devil down in the depths of hell in the music video for his certified bop “(MONTERO) Call Me By Your Name,” to busting out of Montero Prison with the help Jack Harlow in the “Industry Baby” music video, to trolling his way through his forthcoming album release with a prosthetic baby bump, he’s been dominating the music industry and proving once again, that Twitter sh*tposters make some of the most compelling artists. At the MTV Video Music Awards on September 12, Lil Nas X not only stunned on the red carpet in an off-the-shoulder lilac number and a cascade of curls, but he also absolutely tore on the main stage in of the night’s main events.

Lil Nas X delivered pure spectacle, and hit the stage as the leader of a marching band and jumped right into “Industry Baby.” Of course, he had his Montero Prison background, which included a costume change and, before you ask, yes — the iconic shower dance was recreated in a fabulous dance break for maximum effect. Not to ignore his own massive hit, Lil Nas X shifted into “MONTERO” (Call Me By Your Name)” and ended the performance by disappearing in a puddle of writhing lithe, shirtless dancers. Hot!

In addition to rocking his performance, Lil Nas X swept in VMA nominations with fives for “(MONTERO) Call Me By Your Name” including: Video of the Year, Video for Good, Best Direction, Best Art Direction, and Best Visual Effects.

NEXT UP
Culture
Spice Girls May Reunite For King Charles’ Coronation
Culture
Who Won At The 2023 Grammys
Culture
Kareem Rahma Survives A Dinner Party From Hell In “Really Rich Parents” Video
Culture
The Cutest Couples At The 2023 Grammys
Style + Culture, delivered straight to your inbox.