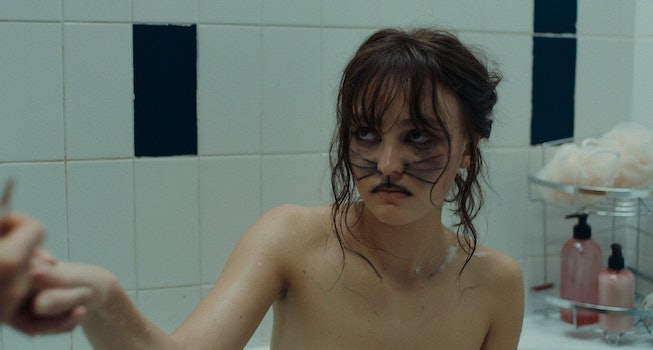 In Wolf, Lily-Rose Depp plays a wildcat — or at least, a girl who believes herself to be one.

The psychological Irish-Polish drama follows Jacob (George MacKay) and a ragtag group of young people with species dysphoria: They believe themselves to be animals trapped in human bodies. One boy attempts to scale a tree like a squirrel; a girl wears a parrot mask and only eats seeds; another boy’s species dysphoria manifests in a compulsion to mark his territory like a German Shepherd. Jacob believes himself to be a wolf and has to stop himself from howling at the moon nightly. He’s been sent to a rehabilitation institution presumably to change, but ends up under the tortuous watch of an abusive doctor, referred to as the “zookeeper” by his patients. It’s there that Jacob meets Depp’s Wildcat, a mysterious patient who has lived in the institution since she was young. The two fall in love in a primal sort of way in a drama that leaves as many questions as it poses about humans’ primal instincts, what it means to belong in your body, and the ways we nonverbally communicate.

“Animals have this way of communication, which is obviously wordless, because they’re animals. We talked a lot about that in our prep, which was creating a form of communication that was nonverbal and very energetic. I don’t know, I think that sometimes in life you meet people and have connections you can’t really put words to,” Depp tells NYLON. “Putting words to it almost cheapens it and I think that’s what Jacob and Wildcat have.”

It’s a vulnerable role for noted cool girl Depp, who crawls around in muddy puddles on a roof in an animalistic courtship with Jacob, full of grunting and nuzzling. It’s intimate, raw, and cringe in a way that you can’t look away. Depp talked to NYLON about the film’s impossible love story, finding communities that accept you for whoever you are, and how she got down on the floor with her pet cat to prepare for the role.

How did you get involved with the film? What attracted you to the script?

Before even reading the script, hearing what it was about, I was already very intrigued, and when I read the script, I felt like I had never read anything like it before and never came across a character like this before. She’s so beautifully complex in so many ways, and that can be said about all the characters in the movie, which are all beautifully portrayed by incredible actors. As soon as I met Natalie (Biancheri), the director, I felt like she was such a creative force and when someone is so passionate and excited about what they’re doing, that’s really infectious. I felt like she was going to bring this to life in a really, really special way. I was dying to be involved. I was really excited by the challenge it posed as well — both the physical and emotional complexity of the role was really exciting to me.

Were you familiar at all with species dysphoria?

It’s something I had vaguely heard about. I think it’s important to also say this isn’t a totally accurate depiction of species dysphoria, because obviously that’s a real condition. I’m not a doctor; I’m not qualified to speak to its complete accuracy and everything, but it was I think a really important jumping off point for us in order to talk about self-expression and self-identity and freedom and all of the things that it entails.

Our director describes it in this really beautiful way, where it's almost like they’re always looking at each other through a glass window because there’s this inherent distance between them. I think they see in each other something they are kind of looking for in themselves and that really connects them, but at the same time there’s a wildness to Jacob that Wildcat will never have, and there’s a shelteredness to Wildcat that Jacob will never have. Logistically, they won’t have a “normal” relationship or functional partnership in the real world because Wildcat hasn’t been given the tools to do that out in the real world. The impossibility of the story makes it heartbreaking, but also makes it really real. I cried when I read the end of the script, but at the same time I think it’s the only ending it could have been.

Why do you think your character is so attracted to Jacob?

I mean I think that animals have this way of communication which is obviously wordless, because they’re animals. We talked a lot about that in our prep, which was creating a form of communication that was nonverbal and was very energetic. I think that sometimes in life you meet people and have connections you can’t really put words to. Putting words to it almost cheapens it and I think that’s what Jacob and Wildcat have. She almost sees a wildness in him that she’s fascinated by, because it feels really, really genuine. Jacob, he’s a wolf. Jacob doesn’t believe himself to be somebody to have species dysphoria. He believes he is a wolf trapped in a man’s body and that is what he is, and I think that’s what he is to her. I think she sees a genuine wildness in him that she hasn’t come across before that she doesn’t feel in herself that’s really fascinating to her and I think that she really falls in love with him. But sadly, I think Wildcat falls in love with Jacob like a girl falls in love with a boy, and I think he attaches like an animal attaches to another animal, so that dissonance is heartbreaking.

Can you talk about the process of physically transforming into a wildcat and what you did to prepare to tap into this energy? It is such a physical role.

I mean the physical preparation was super important and I think it went kind of hand in hand with the emotional preparation. The animal place is where my character feels the most comfortable and the most herself and the most safe, so connecting to that feeling was really important. If I could find a comfort and an ease and a freedom in the physical movement that I could connect to my characters’ comfort and freedom and everything, those are really important emotions. I think getting as comfortable as possible in the movement as I could was really important and I think working with George and doing a lot of animal improv with him helped us build our dynamic and figure out how our characters related to each other. We worked with an incredible movement coach named Terry Notary whose and he helped us a lot with creating the animal movement. It’s very vulnerable work, it’s very emotional work, so I think being open to that part of that process.

On that note, there’s a lot of really vulnerable moments in the movie that are so vulnerable, it’s almost cringe to watch, because the animal movement is so on point.

Thank you, that’s really nice. I think there’s a reason a lot of acting classes have you do animal improv as an exercise, even if that has nothing to do with your role, because there’s something about connecting to an animal that brings you back to a very primal side of yourself. George was saying this earlier, which I thought was really interesting, which is that being human means being full of thought, and releasing yourself from thought means connecting to your more animalistic side that connects you to a freedom that’s very liberating and very important to us, I think, for this.

What do you think Wolf ultimately says about the animal part of humans? What are the takeaways?

I think there’s so many takeaways from this movie and my favorite kinds of movies are the ones that don’t give you all the answers, that leave you talking about it with your friends for a long time after the movie and leaves it up to the viewer’s interpretation. But what I hope people take away from this movie is that whatever you feel that you are is what you are, and that nobody should tell you you should be a different way in order to be accepted or in order to be a part of society. There is community everywhere and there are people who will understand you and will accept you and relate to you, even if you haven’t found them, and it’s important to not only go down the path of self-discovery but treat whatever you find on that path with love and respect and with acceptance.

Is there an animal that you identify with?

I mean, I feel like it’d be too easy to say a cat, but that’s the one I’ve spent the longest studying. And I have a cat, so I love cats. So maybe a cat or maybe a panther or something. Definitely something feline.

Did you watch your cat at all in preparation?

Oh yeah for sure, I mean my cat’s like not wild at all, my cat’s like a little teddy bear, so I couldn’t base it all off him, but I definitely observed him a lot. I would crawl next to him on the floor to see how he'd react and gauge his reaction and take that to see if I was doing good or not.