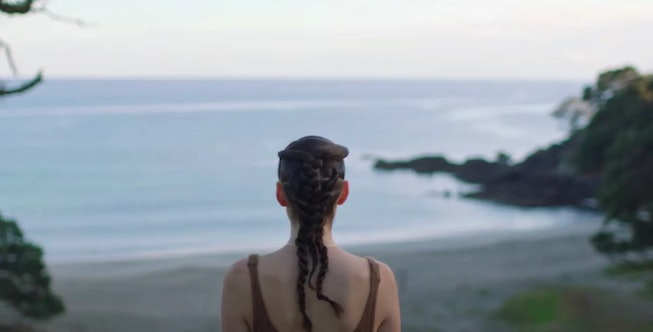 Lorde is back in New Zealand after spending months in the U.S. promoting her hyped but kind of underwhelming album Solar Power. Just in time for southern hemisphere’s summer solstice and the the northern hemisphere’s winter solstice, she released a new music video for the short track “Leader of a New Regime.”

The video follows the same maritime theme of the music videos for “Solar Power,” which some have pointed out on Twitter, could have been an Old Navy ad, and “Fallen Fruit” which was released last month, both of which feature Lorde in looking kind of like a mermaid who just got legs.

The video for “Leader of a New Regime,” is less Old Navy, more nature documentary. It shows Lorde gazing into tide pools, dipping her hand in the water with a complex fishtail braid down her back as she croons, “We need the leader of a new regime.” Chilling and true! Clocking in at just one minute and 40 seconds, the song feels as it’s ending before it’s even begun, but it’s a nice reprieve from the current doom and gloom of the newsfeed. Other shots include women riding horses in the ocean, Lorde walking on sea cliffs and gazing into the ocean and placing her hand in tide pools. Honestly, it looks like a really sweet little solo vacation. Must be nice!

All the videos for Solar Power have been directed in collaboration with Joel Kefali, who also directed Lorde’s “Royals” video back in 2013.

“Solstices should always have offerings,” Lorde writes in a newsletter accompanying the new release. “So for you, here’s the ‘Leader of a New Regime’ video. Just a couple of bites, a feeling, a perfect midpoint in the Solar Power journey. I hope you like it.”

She added: “Been looking at pics from the last tour, and I cannot f*cking wait to get back out in front of you this year, in all these beautiful venues, bring you this amazing show we’re building. Jesus, I’ve missed it. It’s time.”

Lorde — who is famously not on Instagram, save for an onion ring fan account — also went live on the platform yesterday while she was at the beach to wish her fans a happy solstice. The Solar Power world tour will begin in 2022. Meanwhile, you can watch the “Leader of a New Regime” video and dream of the tropical vacation you probably had to cancel.